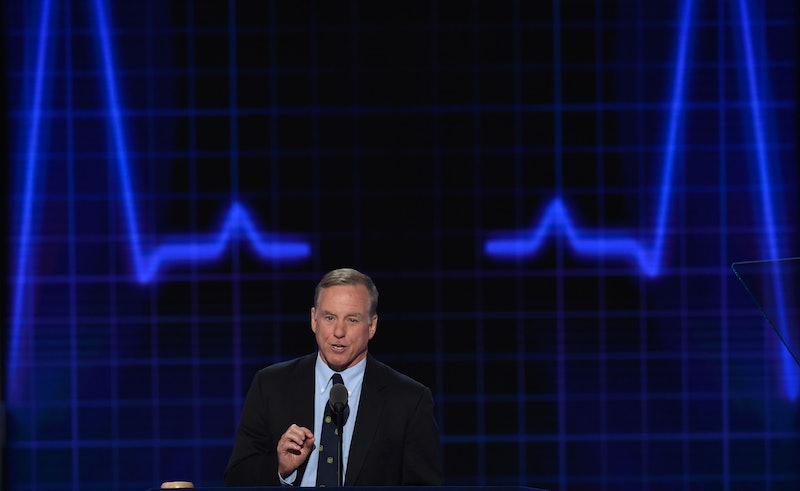 Many Democrats are calling for a restructuring of the Democratic National Convention, including Howard Dean, former DNC chair from 2005 to 2009. Dean has announced his candidacy for DNC chair, but his is one of many names being tossed around as a potential. Vermont Sen. Bernie Sanders has endorsed Rep. Keith Ellison of Minnesota, who is one of two Muslim Americans in the House, for the position too.

The DNC chair is normally chosen by the Democratic president, but as Republican Donald Trump has been elected, the chair will be elected by party officials and state delegates. Dean announced his candidacy on Thursday by Tweet. "The dems need organization and focus on the young," Dean wrote. "Need a fifty State strategy and tech rehab. I am in for chairman again."

The call for restructuring of the organization comes on the heels of thousands of hacked emails involving DNC leadership being released on WikiLeaks. Former chairwoman Debbie Wasserman Schultz of Florida resigned following revelations that she had been part of helping Hillary Clinton secure the Democratic presidential nomination while hindering Clinton's opponents. (The DNC is not supposed to endorse or support primary candidates.) The most notable of these opponents was Sanders, who told the Washington Post he wasn't surprised by this.

The DNC's current interim chairperson, Donna Brazile, has also come under fire for reportedly giving Clinton's campaign advance information about a debate question on two separate occasions while Brazile was a CNN commentator. (CNN has since severed ties with Brazile.) This was revealed through another round of hacked emails published by Wikileaks in October. CNN spokesperson Lauren Pratapas denied giving Brazile access to the questions and said CNN was "completely uncomfortable" with the situation, USA Today reported.

Following these circumstances, it makes sense that many Democrats say they want to change the way the DNC is run, starting with its chair. Ellison has not officially announced his candidacy, but as a black man and a Muslim American, his appointment would be a "symbolic rebuke of Trump," (who has in the past supported a ban on Muslims entering the country, before backtracking and having this erased from his website). While Dean has the advantage of not holding office, meaning he could devote his full time to being chair, progressive network MoveOn.org has endorsed Ellison. "The DNC must clean house and the new chair must stand up to all efforts by Trump and Republicans to move their harmful and bigoted agenda, which lost the national popular vote," MoveOn executive director Ilya Sheyman said in a statement. "At the same time, the DNC must connect with the grassroots of the party base that wants the party to reject corporate influence and advance an inclusive, progressive agenda that will energize voters and grow our base in 2017, 2018, and beyond."

Still, several DNC members were surprised but “enthusiastic” upon hearing of Dean's intent to run, Politico reported. "Gov. Dean is highly respected amongst chairs and DNC members because of the 50 state strategy. ... He will be formidable in a race for chair," Jaime Harrison of South Carolina told Politico. Both Dean and Ellison have been associated with the 50 state strategy, which involves promoting change in all states without calling any of them, mainly states that vote largely Republican, "un-winnable." We'll have to see who ends up as the next DNC chair, but it seems pretty likely that whoever it is will be part of spearheading change within the organization.