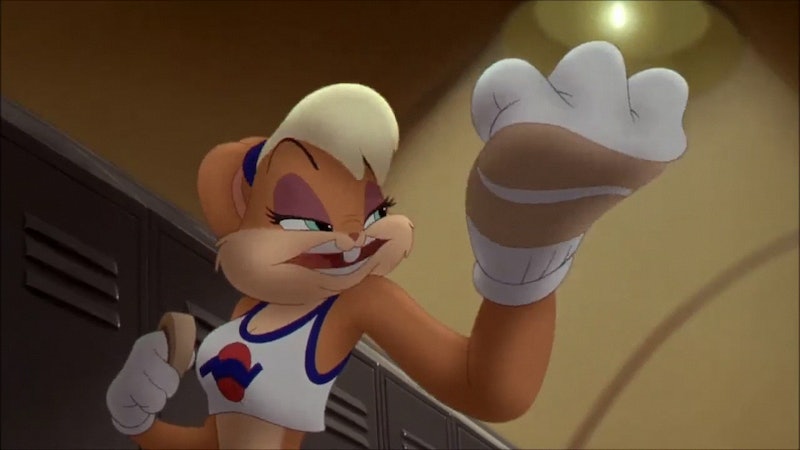 Twenty years later I still may not fully understand the plot of Space Jam (Seriously, does anyone?), but I definitely have feelings on whether or not Lola Bunny is a strong female character. As the only girl in the Looney Toons movie, which has Bugs Bunny and his friends teaming up with Michael Jordan for an intergalactic basketball game, she proves she has the skills to be on that court. She also spends most of her time being Bugs’ object of desire. When I rewatch this movie as an adult I realize Lola Bunny is more of a fetish then a legitimate heroine for little girls.

This isn’t all that surprising, being that Lola Bunny was created as a “female merchandising counterpart” to Bugs Bunny, according to the 1998 book, Reading the Rabbit: Explorations in Warner Bros. Animation. She was there to sell T-shirts and dolls to athletic little girls who were tired of feeling left out. They did this by trying to sell it as girl power at a time when little girls needed to see other women doing all the things men did. Here, they even made Lola do them better — after Jordan, she’s the best player on that court, dunking left and right, while her male counterparts struggle to dribble.

It’s why the idea of Lola Bunny is so important to so many girls growing up in 1996, who were looking for female sports heroes. Even cartoon ones. She was cool, calm and collected, standing up for herself against anyone’s misogyny. In fact, when Bugs does call her “doll,” her eyes turn into flames and she let’s him know, in no uncertain terms, “Nobody calls me, doll.” A sentiment she would need to repeat later on in the movie.

It shouldn’t go unmentioned that Space Jam hit theaters following the 1996 Atlanta summer Olympics, which would later be hailed the “Summer Of Women.” This past summer, the San Francisco Chronicle pointed out that it was those Olympics, which saw not only the “Magnificent 7” female gymnastics team take gold, but also the women’s basketball team, soccer team and softball team — the latter of which were making their Olympic debut, which finally showed women as strong competitors. This was the first generation of women competing in the Olympics that had been raised under Title IX, the 1972 federal law that protected people from being discriminated based on sex in educational institutions and activities, and the benefits of this law, were obvious.

As the Atlantic pointed out, the Atlanta games were defined by strong female performances that were actually being shown on TV. (When it came to screen-time, men favored women in one of the smallest gaps ever; 53 to 47.) It was as if women were not as invisible as they once were. It was as if the world was ready to give little girls strong women to look up to. It was a step in the right direction when it came to portraying strong female heroes.

But, we weren’t quite there yet. Female athletes may have been seen more that year, but that didn’t stop these athletes from being talked about in sexist terms. The University of North Texas reported that male commentators during the 1996 Summer Olympics referred to female athletes by focusing on their appearances more than their talents, calling them things like "the glamour girl of swimming," "the babe of summer," "the chief fashion plate of the Olympic games" and saying "she has the prettiest nails in the competition." UNT also reported that female athletes were repeatedly called “girls,” while men were not being called “boys.” That female athletes were referred to by only their first name, which “infantilizes women and presumes a lesser status than male athletes.”

What you realize watching Space Jam in 2016, is that is exactly what the movies does to Lola Bunny. She is strong, but she is made to be weaker than she is. Her role in this movie becomes even more clear when she walks onto the screen for the first time soundtracked by sexy femme fatale music that shows her swinging her hips in cutoff shorts and a crop top. She’s more like a bunny version of Jessica Rabbit, there to entice Bugs with her very sexy baby voice.

This is not the character that truly empowers young girls, but is a manifestation of what men think women should be: She can be good at sports, but she should also look good doing it. Lola is on screen for less than four minutes of the hour and forty minute film and throughout all of it, even when playing basketball, she’s in a crop top. This wouldn’t be so bad, except everyone else’s uniform seems to include a full shirt.

She, like so many female athletes, is second rate compared to the men that surround her, even if she is more talented. She gets to show those aliens who’s the boss with a spectacular dunk, but she ultimately needs to be saved by Bugs Bunny in the end. She can help the men win the basketball game, but she’s not equipped to protect herself without the help of a man — or in this case, a bunny. It’s still a classic damsels in distress story, disguised as a female empowerment tale.

It’s infuriating now, but twenty years ago, this all seemed progressive to have Lola Bunny be an athlete at a time when most little girls only had Disney Princesses to look up to. For everything wrong with Lola, there are good things that even now are worth noting: She is confident. She is talented. She is witty. She isn’t afraid to show off. Of course, we wouldn’t want to see Lola strut onto the court with her crop top in a 2016 because that would be a setback for female characters. Especially ones aimed at little girls. The Mary Sue even wrote a plea to anyone involved in Space Jam 2, asking that they do better by Lola. Something I second, but know wouldn’t happen.

Lola was a product of her time. She was flawed as a heroine because this wasn't about spreading feminism, but hitting a sales quota. But, what she stood for in 1996 was important and that shouldn't be forgotten now. Lola Bunny was proof that little girls could compete with boys and win. She probably also inspired more than a few little girls to grab a basketball. When it came to creating a full-fledged female figure though, we still had a long way to go. That's why when Lola teams up with LeBron James for the sequel, go right ahead and change her outfit, make sure she has more than five lines in the entire film, and make sure she's more than the love interest. But don’t change her attitude, and definitely don’t even think about calling her doll.