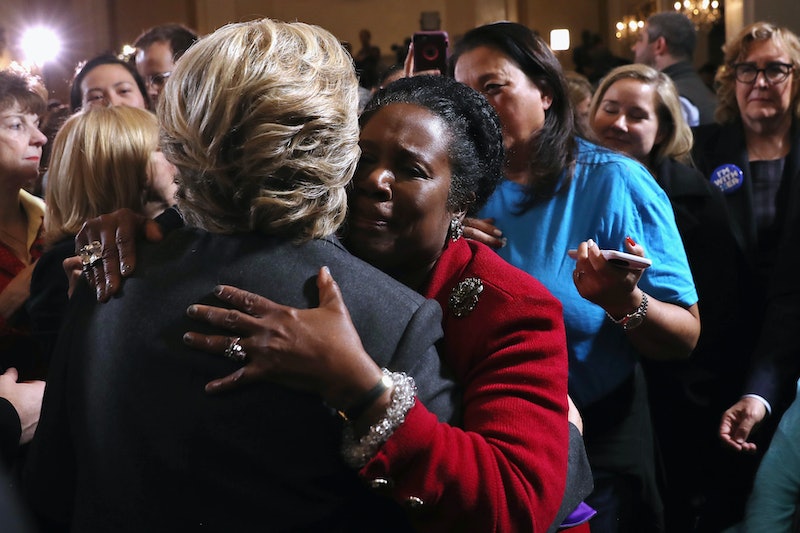 The 2016 presidential campaign was undoubtedly contentious and extremely divisive. But as always, people nationwide found inspiring ways to come together after the election. Following the announcement of the election results, President Obama reminded Americans that we're all part of one country with a powerful, inspiring statement. "Everybody is sad when their side loses an election, but the day after, we have to remember that we're actually all on one team," Obama said on Nov. 9. "This is an intramural scrimmage. We're not Democrats first. We're not Republicans first. We are Americans first."

Some may argue that the widespread anti-Trump protests following Trump's election are a sign that people are divided, but many of those exercising their First Amendment rights to demonstrate are coming together in an inspiring way. "No hate, no fear, immigrants are welcome here!" chanted protesters in Chicago on Nov. 9. They showed how public assembly can be peaceful and promote inclusivity.

Many Americans undoubtedly felt hopeless following the election, including yours truly. How could a man who has made so many discriminatory and even predatory statements have been elected president? But regardless of what our country chose on Nov. 8, it's important to realize that there is always hope. Here are some inspiring ways people showed that very hope after the election.

LinkedIn's CEO Wrote To His Employees

LinkedIn's CEO Jeff Weiner sent his employees an email from the heart following the election results, and it touched them so much that he decided to share it publicly. "I hope the same holds for everyone at our company -- that no matter what our political leanings, our race, religion, gender, creed, or country of origin, we treat each other with respect, with compassion, and above all else, we take care of one another," Weiner wrote. "No election should ever change that."

In a graceful concession speech, Clinton addressed women everywhere. "To all the little girls who are watching this, never doubt that you are valuable and powerful and deserving of every chance and opportunity in the world to pursue and to achieve your own dreams," she said.

Therapy Dogs To The Rescue

Encouraging Letters At A College

A community college bathroom wall covered in letters to members of traditionally marginalized communities was a powerful reminder that people are not their stereotypes. "Dear Mexican students, You are not rapists or drug-dealers," one letter read.

DeGeneres' post-election monologue involved this powerful statement: "My job is to be hopeful and to make everybody feel good. And I'm gonna keep doing that for as long as I can. I will do it because I love you."

Lawyers Are Coming Through For Transgender Americans

Transgender and non-binary people in particular are vulnerable to potential changes in policy regarding their legal rights under a Trump administration, so lawyers and advocates are offering them legal help through #TransLawHelp on Twitter.

Parks and Recreation's most positive, feminist character has a message to help us all cope with the aftermath of the election. It's equal parts funny and hopeful.

Planned Parenthood Is Here To Stay

Trump and his vice-president Mike Pence ran on a strongly anti-choice platform, which included an intent to defund Planned Parenthood. PP president Cecile Richards told MSNBC's Rachel Maddow that following the election "thousands of supporters around the country took to social media last night immediately, folks have been dropping off baked goods at our health centers." Supporters of reproductive rights are making their intent to keep Planned Parenthood around known in concrete ways, such as donating and volunteering.

Construction of the Dakota Access Pipeline would have negative environmental impacts and intrude on Sioux burial grounds and sacred land, according to demonstrators. For this reason, people across the country are peacefully coming together at local rallies to stand in solidarity with Standing Rock water protectors. If you want to get involved, consider donating to the Sacred Stone Camp, which is sorely in need of resources. Now that Trump has appointed a climate change skeptic to lead the EPA transition, protecting the environment is more crucial than ever.

Kayla Santosuosso, deputy director of the Arab American Association of New York, created a sign up sheet for New Yorkers to accompany members of vulnerable populations, after hearing about the harassment of a Muslim woman. "This form is for New Yorkers who are willing to accompany their neighbors on their commute in light of recent harassment and threats toward people of color, LGBTQ folks, and Muslims," Santosuosso wrote. She has received thousands of responses. If you are a New Yorker and want to get involved, here's how to sign up.

Members of college communities all over the nation came together for peaceful rallies. For instance, students at a rally sponsored by Boston University publication Hoochie, a feminist journal, came together to advocate for human rights on Nov. 13.

From what I've seen so far, no matter how bad things seem, people will always manage to find a way to put aside negativity and make each other feel better. And as people continue to support each other, they become advocates for positive change.