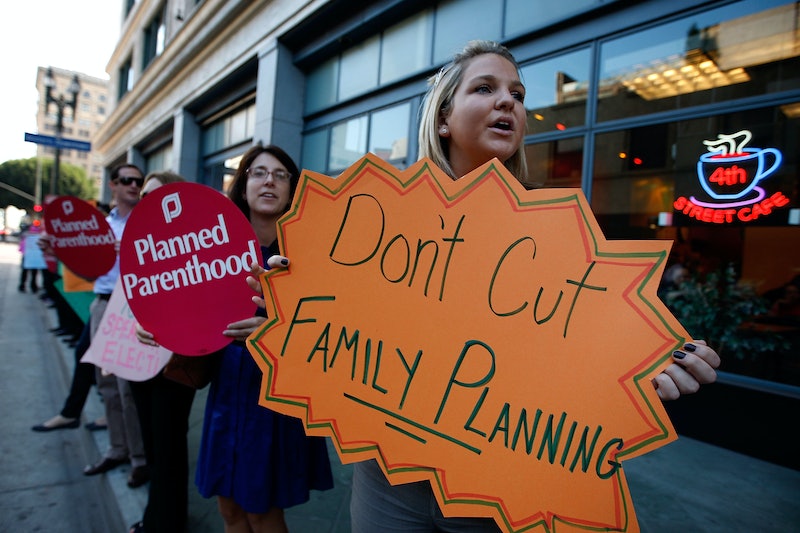 For anyone wondering what Donald Trump's election victory might mean for the future of their lady parts, I have some good news: President Barack Obama is moving to protect Planned Parenthood funding, permanently.

In his last few months in office, Obama is working to keep Republican lawmakers from using abortion services as a means of defunding Planned Parenthood. Last week, the Department of Health and Human Services proposed a new rule that would prohibit states from withholding Title X federal family planning money for political reasons. Specifically, the rule states funding cannot be withheld for any reason other than the provider's "ability to deliver services to program beneficiaries in an effective manner."

"This will make a real difference in so many people's lives," Planned Parenthood's president, Cecile Richards told the Huffington Post. "Thanks to the Obama administration, women will still be able to access the birth control they need to plan their families, and the cancer screenings they need to stay healthy."

Lawmakers in 23 states have attempted to defund Planned Parenthood, with 11 of those states successfully blocking funding, despite the fact that Title X funds are never used for abortion services, even at Planned Parenthood. Rather Title X funds go toward services like birth control, pregnancy testing, and cancer and STD screenings.

If the rule change proposed to the Title X Family Planning Program becomes permanent following a 30-day commenting period, it will throw a serious wrench into any plans Trump or the Republican Party has for cutting federal funding to the nation's largest affordable health care providers.

Trump hasn't seemed too clued into the issues facing women voters. At one point during the election, he claimed women who got illegal abortions should face "some sort of punishment," a statement he later amended to say doctors performing the abortion should be punished and not the woman after receiving significant criticism. In March, he praised Planned Parenthood for doing "very good work for millions of women" just before vowing to defund the health care organization. "We're not going to allow, and we're not going to fund, as long as you have the abortion going on at Planned Parenthood," the Washington Post reported Trump said March 2 in Palm Beach, Florida. "I've said it loud and clear." In fact, throughout much of his campaign, Trump repeatedly promised to repeal the Affordable Care Act and defund Planned Parenthood, an organization that on top of providing abortion services also provides birth control, pap tests, sex education, cancer and STD screenings.

A lot is still unknown about the effect the Trump Administration will have on women's health services. Will he manage to repeal Obamacare, which currently offers services like birth control, breast pumps, mammograms, and cervical cancer screenings as preventative care, covered at no cost to you? Will he redefine what constitutes preventative care and strike contraception from the list? While we likely won't know the answers to many of these questions until Trump takes office in January, it's comforting to know President Obama is actively seeking ways to protect women's health care.