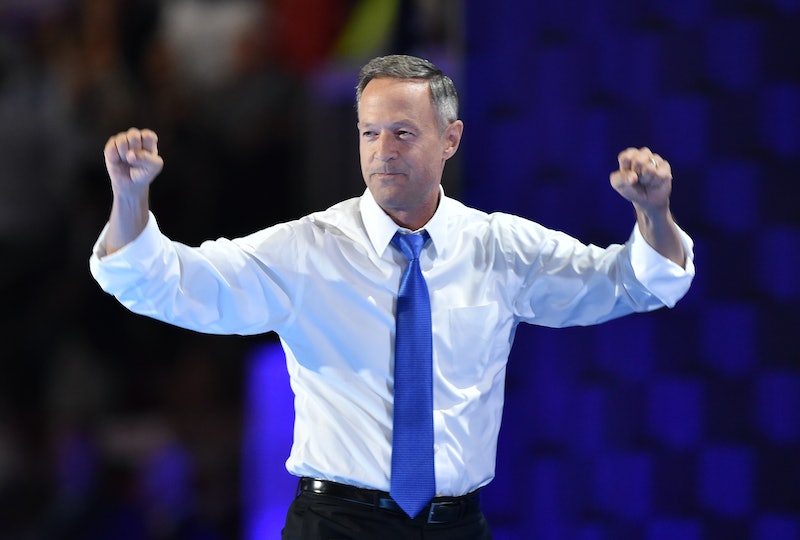 The Democratic National Committee is turning its attention inward following Donald Trump's surprise victory, as multiple contenders begin to emerge in the race for party leadership. Among them is former presidential candidate Martin O'Malley, who hinted he'd run for DNC chair over the weekend.

O'Malley announced Friday he was "taking a hard look" at running for DNC chair. "Since the election, I have been approached by many Democrats who believe our party needs new leadership," O'Malley said in a statement provided to Bustle. "I'm taking a hard look at DNC Chair because I know how badly we need to reform our nominating process, articulate a bold progressive vision, recommit ourselves to higher wages and a stronger middle class, and return to our roots as a nationwide, grassroots party." O'Malley, who served as chairman of the Democratic Governors' Association, did not elaborate as to when we can expect his final decision.

The former Maryland governor is not, however, the only Democrat currently mulling over a potential run. Former DNC Chair Howard Dean announced his interest in resuming the role Thursday, saying the party needed to focus on organization and young voters while developing a 50-state strategy and diving into what he called "tech rehab."

"I don't believe in going back, but the party's in big trouble and I have the best record of any DNC holder I think in history," Dean told Bloomberg.

Although the former Vermont governor comes with roughly four years of experience chairing the DNC, not every party member has welcomed Dean's announcement. Following the news, former presidential candidate Sen. Bernie Sanders enthusiastically threw his support behind Minnesota Rep. Keith Ellison, who has yet to announce a decision either way. Sanders claimed Ellison's "experience and perspective would be key to leading the fight against Trump" in an email to supporters Thursday, CNN reported.

Fellow progressive Sen. Elizabeth Warren said she felt Ellison "would make a terrific DNC chair" but seemed willing to embrace news of Dean's interest as well. "I'd like to hear what his vision is," she reportedly told Politico. "But I want lots of Democrats in, engaged and ready to go." Ellison is expected to make an announcement regarding the matter Monday.

Donna Brazile currently heads the DNC as interim chair following the resignation of Debbie Wasserman Schultz on the eve of the party's nominating convention in July. Wasserman Schultz was forced to step down after hacked emails showing she collaborated with other DNC members to weaken Sanders' primary campaign were leaked publicly. Although Brazile has been serving as DNC chair for only a few short months, she too has faced heavy criticism. Hacked emails published by WikiLeaks in late October showed she tipped off Clinton's campaign to a potential debate question ahead of a CNN-sponsored town hall event.