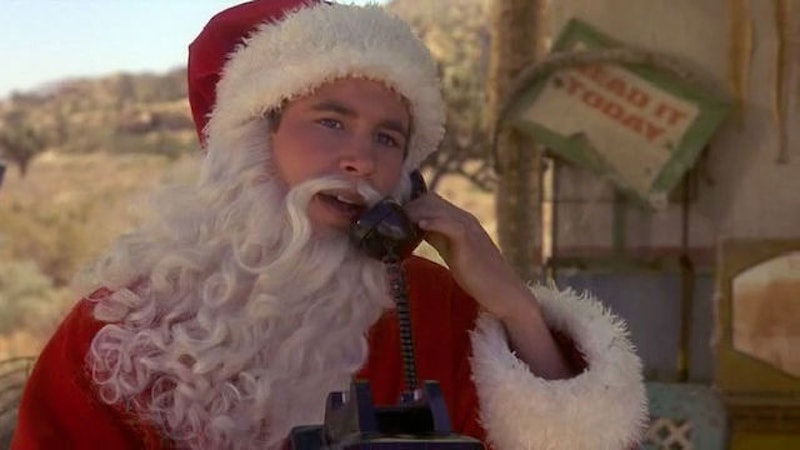 The holiday season is here once again and that means it is time to break out the hot cocoa and watch some old school holiday movies. Your first move is going to be watching the classics: Home Alone, The Santa Clause, and the always hilarious Jingle All the Way. Once you get your faves out of the way, it will be time to delve deeper into Christmases past, and watch all the '90s holiday movies you forgot existed.

I am here to remind you that Home Alone is not the only '90s holiday movie you were probably obsessed with as a kid. There were movies about talking dogs, magical snowmen, and wishes gone horribly awry, and there were animated faves you watched so many times the VCR eventually ate them, leaving you bawling next to the Christmas tree while your mom tried in vain to respool the film. It is time you get a visit from the Ghost of Christmases pasts, my friends, because you have forgotten about so many awesome (and OK, sometimes bizarre) holiday favorites.

Let these beloved films stop collecting dust like unloved tins of fruit cake in the back of your pantry. Have your nostalgia at the ready, because here are 17 '90s holidays movies you forgot existed, but really need to fall in love with again.

Erik von Detten, '90s heartthrob and voice of Toy Story's Sid, appears in this cautionary tale about wishing for too much of a good thing. The film used to be an annual tradition, airing on ABC Family so tweens everywhere could get their holiday swoon on.

Another Christmas wish tale, this one stars a young Thora Birch as a precocious kid who wants nothing more than to have her parents reunite. It's like The Parent Trap, but more festive and without the constant use of splitscreen.

If you cannot indulge in the cuteness of a talking animal movie during the holidays, then when can you? The third installment of the Look Who's Talking trilogy is a Christmas movie that turns the talking over to snarky dogs. Honestly, to ask for anything more would land you on Santa's naughty list for being greedy.

This animated version of The Nutcracker is timeless. It hits all the beats from the original story and adds in just enough slapstick to keep you giggling for an hour and a half.

Look, there is no getting around how weird the premise of Jack Frost is — a little boy's dad dies and returns as a, quite frankly terrifying, snowman creature. And yet, it works. Even as you recoil from the screen in horror of the snowman, you will be sobbing because this movie may have some serious uncanny valley issues, but it also has lots of heart.

Country singer Randy Travis narrates a movie about a talking calf that wants to be a reindeer, and the calf sounds exactly like Lil from the Rugrats. Yes, it is as strange as it sounds.

Dolly Parton has to complete one good deed to become an angel, but this movie's real highlight is a young Allison Mack, a.k.a. the girl who would grow up to be Smallville's Chloe.

Oh, that's right, there was a Beauty and the Beast Christmas movie, and even though it went straight to VHS it was magical. It's basically a lost segment of the film with way less conflict, so you can just enjoy Belle and the Beast exchanging gifts and ice skating.

If you have ever wondered what Santa does during his off days, this is the movie for you. There's Santa camping, Santa gambling in a casino, Santa floating down a river in his swim trunks — it is everything you never wanted and so much more.

Romantic holiday movies are predictable, but so reassuring and festive they cannot be denied. This movie starring Roma Downey was probably one of your mom's faves, which is all the more reason to track it down and have a movie night with her this year.

Jonathan Taylor Thomas hitchhiking across country dressed as Santa Claus is not something you imagined. It is an actual Christmas movie, and it still holds up, guys.

Before Mark Ruffalo was a certified movie star he made the best Lifetime Christmas movie ever.

Richie Rich doesn't get much love these days, but you know you adored his movies in the '90s. There's no Macaulay Culkin in the sequel, but it is still packed with '90s stars and a festive Christmas robot.

Olsen twins alert! This fluffy Christmas tale will always be a classic thanks to the adorable Full House stars.

It's a little somber, but any Christmas with Neil Patrick Harris in it is one you need to revisit.

A super jaded book editor is confronted with her inner child just in time to reawaken her love of Christmas. As an added bonus, Hayden Panettiere plays said inner child.

Stream If You Believe here.

Finally, there is the ultimate '90s Christmas movie. You may believe deep down it was all a fever dream, but there really was a movie starring Hulk Hogan as an amnesiac who thinks he is Santa. Weird, cheesy, and oh so watchable — if you don't revisit any other movie on this list, then at least make a little time for Hogan this holiday season.

The '90s truly were a golden age for Christmas movies. These forgotten classics will take you right back to your childhood if you let them.