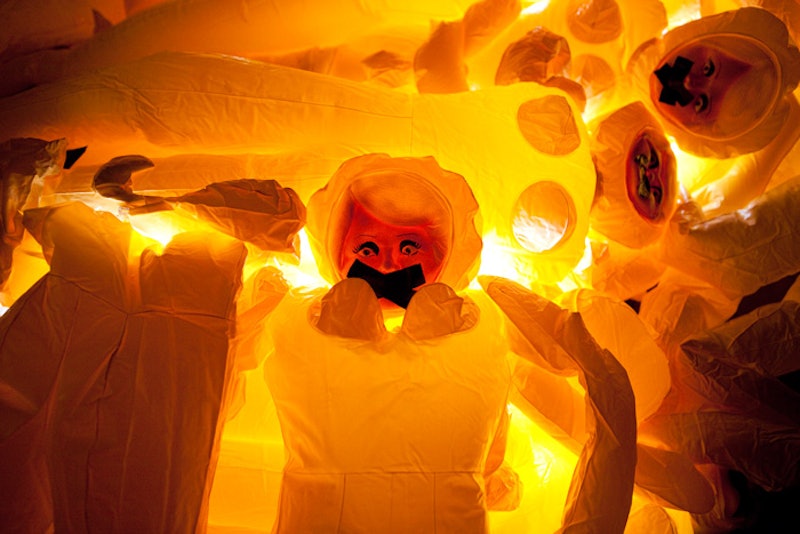 It may be a little strange, but it is undeniably creative: in reaction to Spain's push to severely limit women's access to abortion in the country, activists have strewn the streets of Madrid with half-inflated sex dolls as part of an installation that hopes to send a message about women's rights in the country.

The project, put together by the group Luz Interruptus, is called "Rights to Trample On" and has already drawn media attention. For it, novelty dolls were half-inflated, fitted with lights and had their mouths taped shut with black tape. They were then piled by the dozen on the sidewalks close to the Ministry of Justice, like "a carpet of bodies ready to be trampled upon."

"Thinking about how women’s rights are being trampled by politicians and legislators, we decided to take to the street to demonstrate our opposition to the law, quite clearly intended to win votes from the more radical right," the group writes on its site. "The action was called Rights to trample on and it took us a couple of hours to carry it out."

The protest comes as Spain considers rolling back the legislative clocks to 1985, when it was close to impossible for women to get abortions in the county. As it stands, Spanish women have had the right to get an abortion for up to 14 weeks into their pregnancy since 2010 — the new legislation, put forward earlier this year, would allow abortion only in life-threatening situations, or in cases cases of rape. Worse, both of these conditions would need verifying, and by two medical professionals, at that.

The new bill ( the only one of its kind in Europe) is so draconian that not only pro-choicers, but even pro-lifers have protested against it. As Bustle has previously noted, some activists have even gone so far as to symbolically register their bodies for property rights. Still, none before have used sex dolls to force government officials to literally walk all over women.

Incidentally, the installation has now been all packed up, and the group has extras — according to the site, "now we have a lot of dolls in our possession, and we would like to give them away to anyone who wants to adopt one. If you would like one please contact us and we will get it to you."