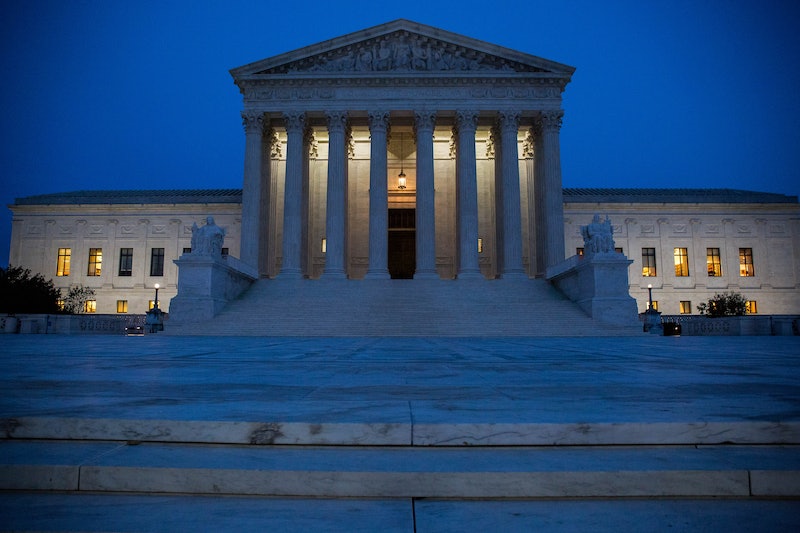 Now that Donald Trump has been elected president, the U.S. is bound to undergo major changes when the Republican president-elect takes office on January 20. Among other questions, many are wondering who Trump will appoint for the Supreme Court — Republicans have held open the position left vacant after the death of Antonin Scalia in February by simply refusing to consider President Obama's Supreme Court nominee. This has left a position ready and waiting for Trump to fill as soon as he becomes president, allowing him to ensure a conservative majority on the bench that could last for years.

Prior to the election, Trump released two lists of 21 possible picks for his nomination to the Supreme Court, and during the third debate, he assured voters that all his nominations will be pro-life and "have a conservative bent." (According to U.S. News, both lists disappeared from his website after the election.) In the same debate, he claimed that if more vacancies open up in the future, he would appoint enough anti-abortion justices to overturn Roe v. Wade "automatically," and he went on to talk about the importance of protecting the Second Amendment.

So who are his possible picks? According to CNN, they included U.S. Court of Appeals judges Diane Sykes of Wisconsin and William Pryor, Jr., who has reportedly referred to Roe v. Wade as the "worst abomination in the history of constitutional law," of Alabama. Sykes and Pryor were both nominated by George W. Bush during his time as president.

As Politico points out, Trump listed several other well-known conservative judges, such as federal Court of Appeals judges Neil Gorsuch and Timothy Tymkovich as well as the chief justice of the Michigan Supreme Court, Robert Young. Interestingly, he also named Senator Mike Lee, although Lee appears unlikely to accept a nomination.

Trump is known for being unpredictable, to say the least, but his election to office has all but cemented the chances of a conservative Supreme Court. If he sticks to his campaign promises, his pick in January is likely to be intensely pro-life and favor gun deregulation. Furthermore, current liberal Supreme Court justices Ruth Bader Ginsberg and Stephen Brayer are 83 and 78 years old, respectively, and Anthony Kennedy, who often serves as a swing vote, is 80 years old. In all likelihood, another vacancy will open up in the next four years, allowing Trump to appoint yet another conservative justice — and shape the Supreme Court for decades to come.

More like this
5 Ways To Stand In Solidarity With Women In America From The UK
By Sophie McEvoy
How To Fight For Reproductive Rights, Based On How Much Time You Have
By Courtney Young
Supreme Court Overturns Roe v. Wade
By Melanie Mignucci
How Getting An Abortion Has Changed From The ’60s Through Today
By Amanda Chatel
Get Even More From Bustle — Sign Up For The Newsletter