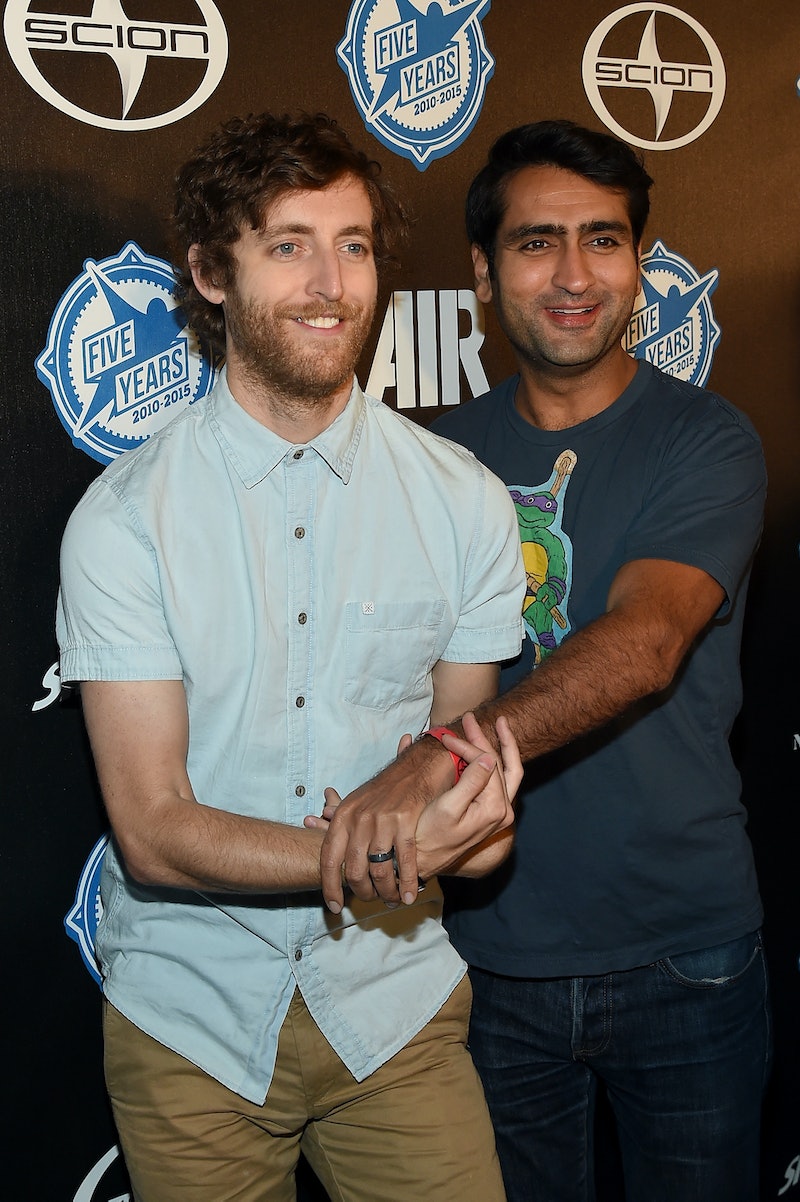 The election of Donald Trump to the US presidency has sparked a series of hate crimes across the country, and even famous men in liberal enclaves are not immune to abuse. On Saturday night at a bar in Los Angeles, Donald Trump supporters allegedly harassed Silicon Valley stars Kumail Nanjiani and Thomas Middleditch. Both Nanjiani, who is Pakistani-American, and Middleditch, who is white, have spent the days following Tuesday's election denouncing Trump on Twitter, with Nanjiani expressing fear for his Muslim family and Middleditch condemning the racism of the election, among many other anti-Trump messages. Nanjiani and Middleditch, who play Dinesh and Richard, respectively, on the tech-centered HBO show, documented their experience at the bar on Twitter, and it's heartbreaking to read.

According to Nanjiani's series of tweets, the two were talking at a bar in the Los Angeles neighborhood of Silver Lake when two white men in their 20s approached them. "We're big fans of you guys," one of them reportedly said, before addressing Middleditch. "I trolled you on Twitter yesterday." The man then allegedly informed the actors that they were wrong about their views on Trump, and when Nanjiani and Middleditch refused to engage in a political discussion, the men reportedly started yelling, "Cuck! Cuck! Cuck!" and invading their personal space before the bartender kicked them out.

If you're not familiar with the insult "cuck," it is a term typically used by white supremacists and misogynists to describe a man who sympathizes with and speaks for causes of feminism, anti-racism, and LGBTQ rights. The word comes from "cuckold," a derisive word used for a man whose wife is cheating on him. As Dana Schwartz wrote in GQ, the term is "a catch-all among the alt-right, in the dark corners of the internet where #feminismisacancer hashtags are a badge of pride and the real enemy is PC culture, where 'cuck' has become shorthand for any perceived weakness, or rather, perceived reluctance to exploit strength." In these circles, Trump is usually considered a hero, the anti-cuck.

Nanjiani and Middleditch were presumably labeled with the term because they have spoken out against Trump and the racism, sexism, and regression he represents. I find it telling that the Trump supporters who allegedly harassed the duo were presumably fans of Silicon Valley, the show the actors are best known for, as the series functions as a parody of the majority-white, bro culture of Silicon Valley. The real Silicon Valley has been tied to Trump; PayPal co-founder Peter Thiel, who was parodied on the HBO show, has been named to Trump's transition team.

It's great that actors like Nanjiani and Middleditch are uncompromisingly speaking out to their fanbases about the hate they've experienced and the causes they believe in, many of whom do not agree them, and I wonder how Silicon Valley itself might address a Trump presidency. I hope the show's writers will work to make its critical perspective more obvious, and while I'm sure that shift might lose the show more than a few fans, there are more than ratings at stake. As Nanjiani thoughtfully wrote on Twitter, "This happened at a bar in LA surrounded by ppl. I can't imagine what it must be like to be someone who looks like me in other parts...We can't let hate/racism/bigotry/sexism be normalized. If something happens, be safe, but let it be known we won't stand for this."

More like this
'Brookside' Is Coming Back & Soap Opera Fans Are Going Wild
By Sam Ramsden
Eurovision Has Been Given A Whole New Look Ahead Of Its Liverpool Debut
By Bustle UK
Man Meets Politics: ‘Boy Meets World’ Star Ben Savage Is Running For Congress
By Jake Viswanath
A 'Terminal List' Sequel & Spinoff Are Reportedly In The Works
By Kadin Burnett and Grace Wehniainen
Get Even More From Bustle — Sign Up For The Newsletter
From hair trends to relationship advice, our daily newsletter has everything you need to sound like a person who’s on TikTok, even if you aren’t.