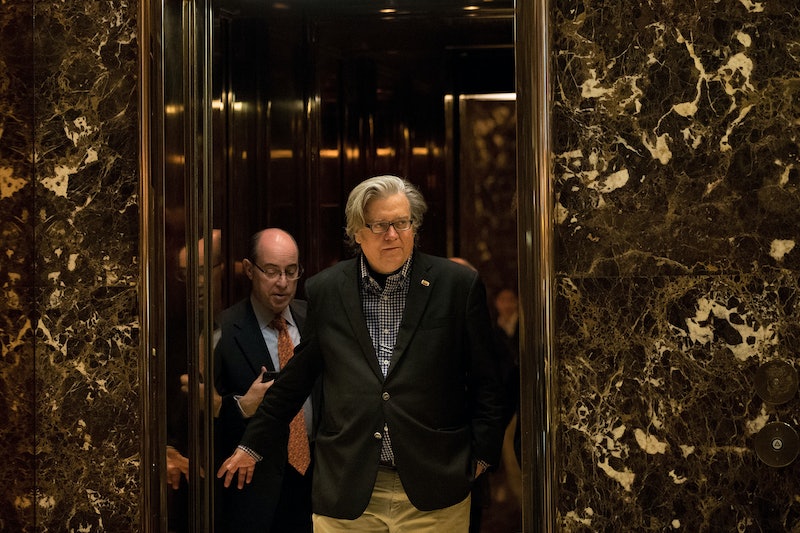 A new White House administration is slowly beginning to take shape less than a week after the election. President-elect Donald Trump appointed Steve Bannon as his chief strategist and senior counselor to the president Sunday, ending days of speculation over what, if any, role the Trump campaign CEO and Breitbart News head might have in a Trump administration. However, Bannon's appointment to a key White House position has worried those who view him as the face of the alt-right.

While announcing Bannon's appointment, Trump's transition team also announced Republican National Committee Chairman Reince Priebus had been named White House chief of staff. In a statement released Sunday, Trump described both Bannon and Priebus as "highly qualified leaders" and said he was "thrilled" to have his "very successful team" continue "in leading our country" with him.

Trump's team claimed Bannon and Priebus would work "as equal partners" but did not go into detail about their duties other than to say they would "transform the federal government, making it much more efficient, effective and productive."

"I want to thank President-elect Trump for the opportunity to work with Reince in driving the agenda of the Trump Administration," Bannon said in a statement released Sunday by Trump's transition team. "We had a very successful partnership on the campaign, one that led to victory. We will have that same partnership in working to help President-elect Trump achieve his agenda."

Unsurprisingly, Trump's decision to appoint Bannon, a highly-controversial figure both in and out of Washington, to the role of chief strategist and senior counselor to the president immediately sparked heavy debate. Some went so far as to claim Bannon's appointment was just as bad as if Trump had hired David Duke, a former imperial wizard of the Ku Klux Klan, for the job.

Critics have long questioned Bannon's ties to the alt-right, a far-right movement seen as having racist and white nationalist undertones. He's been accused of using Breitbart to help mainstream white supremacist views. During the general election, Democratic nominee Hillary Clinton used a sampling of Breitbart’s controversial and insensitive coverage to question Bannon's involvement in Trump's campaign.

Former Breitbart staffer Ben Shapiro publicly lambasted Bannon, describing him as "a bully" and "a vindictive, nasty figure, infamous for verbally abusing supposed friends and threatening enemies" when it was announced he would step in as Trump's campaign CEO. Kurt Bardella, another former Breitbart employee, described Bannon as "the dictator of Breitbart" to Politico in August.

As controversial as Bannon may be, House Speaker Paul Ryan didn't seem concerned about the executive chairman of Breitbart News serving as a senior adviser role. In an interview with CNN's State of the Union, Ryan said he had "no concerns" over Bannon being in the White House. "I've never met the guy," Ryan said. "I don't know Steve Bannon so I have no concerns. I trust Donald's judgment."