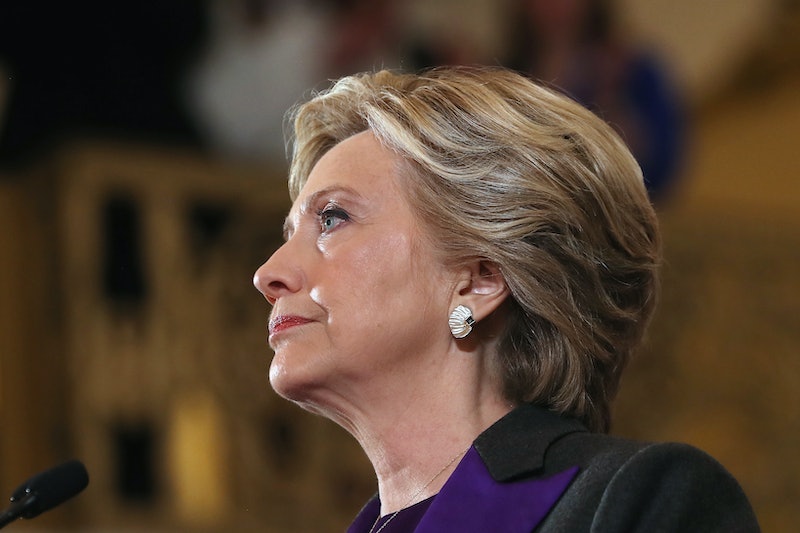 It's the question of the hour, and countless newspaper articles, Ph.D. theses, and, in the coming years, probably books: Why did Hillary Clinton lose? Each will have a different hypothesis, of course. Was it because James Comey sent that letter to Congress about the emails, as Clinton herself believes? Was it because third party candidates took votes away from Clinton? Because Trump appealed better to white working class voters in the Rust Belt? Because minority voters didn't come out for Clinton the way that they came out for Obama?

Well, yes. It's because of all of those things. But despite the validity of each of those arguments, none of them alone can explain it — even if each each has the number to back it up.

No one group of voters and no one event influenced the election such that that one thing or group is the one and only thing to blame. All of them boil down to the real reason that Hillary Clinton lost: the Republican Party and all of its representatives spent the last 25 years smearing Hillary Clinton, and in the end it worked out. They created a dark shadow behind each one of her achievements, turning her into an untrustworthy figure no matter how many times she told the truth when her opponent lied.

Clinton herself seems to believe the argument that FBI Director Comey sealed her fate, but that fateful letter wouldn't have had such an impact if so many voters didn't question her trustworthiness already.

Why did she have such a problem on that front? Mostly because of the Clinton Foundation, Benghazi, the emails — but each of those things was only an issue because Republican strategists made it into an issue. The Clinton Foundation is actually rated very highly by independent charity watchdog groups, but the American right-wing chooses to discount those ratings. The Benghazi hearings proved no wrongdoing on Clinton's part, but the damage was done when her name was attached to the scandal. With the emails, multiple investigations proved that while it would have been a better choice to handle it differently, no one could build a criminal case around her use of a private email server — but Trump was able to loudly proclaim her guilt anyway. Eventually, her email scandal was arguably on par with Watergate.

That tweet suggests a lot of misinformation, and a lot of the people who eventually decided to vote for Trump probably didn't believe all of it. But the reason that Clinton didn't appeal to the people who in the end chose either not to vote, or to vote for someone else, is that her name had been intractably attached to scandal. And although most of those scandals were based on smoke and mirrors, the impression that they created worked. People who weren't necessarily sexist, misogynist, racist, or xenophobic themselves decided to vote for a candidate who was, because for whatever reason, they just didn't like Hillary Clinton.

Hundreds of thousands of voters arguably said that to themselves on Election Day — and Donald Trump can thank the Republican establishment for their dislike of Clinton, no matter his contempt for them. This year, their well-laid plans worked.