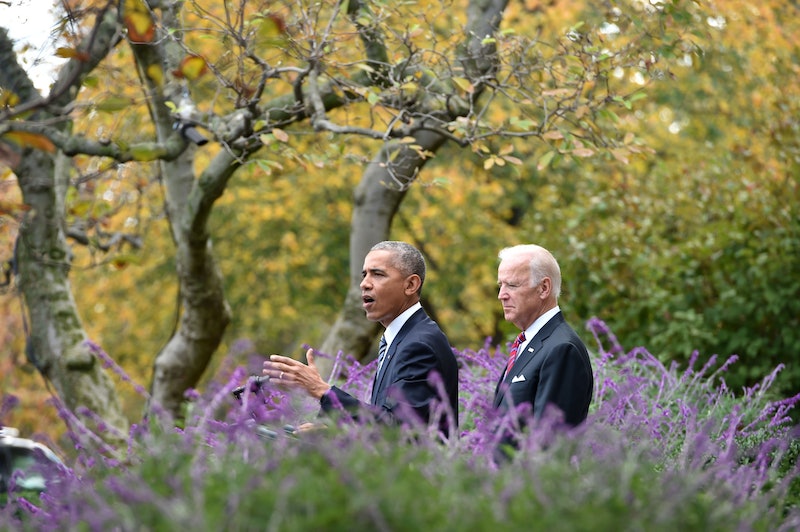 The bromance between President Barack Obama and Vice President Joe Biden is already well-documented, and we have it to thank for so much. Most recently, in this time of great difficulty for liberal America, that most celebrated bromance has produced these amazing Obama and Biden memes. Thinking about the moment that those two walk out of the White House is tear-inducing — but it's a little better if you get to imagine that Joe Biden is busy booby-trapping several rooms in the house in preparation for President-elect Trump's arrival.

Politics requires a certain level of decorum, so you'll never get to see these conversations in real life. But who's to say they're not happening behind closed doors? Joe Biden has never been one to mince words, so it's entirely believable, right? And Barack Obama definitely has a sense of humor, although he always turns out to be the mature one in the memes. So if you're still feeling disappointed — and you have all the reason in the world to be upset about the election results — then give yourself just a moment of levity and enjoy a few minutes with the dynamic duo who still have just a couple more months in the White House.

I mean, I have no proof that Barack Obama is not Batman. Do you?

2. The Pranks Could Be Never-Ending

Although given who they're aimed at, these could be playing with fire.

TBH, it's not the worst idea.

Is that even possible? No? Cool.

Trump's been fooled before, no saying this wouldn't work.

6. Joe Would Have Been Proud To Have Thought Of This

But the thing is, would Trump get the jokes?

7. Anything, Anything To Keep Him Out

This would totally work.

8. Let's Give Pence Some Love

No way the Trump-Pence bromance could ever be this good... or could even exist, really.

9. I'd Take This Prank Myself

What could be better than Michelle and glow in the dark paint?

10. Sure Would Be Embarrassing, Huh

Nothing a slow clock isn't a good excuse for, right?

And really, who doesn't?

12. Hillary Gets A Turn Too

But like, really she's gotta be on Joe's side here.

13. Learning From The Best

This is almost as good as staying in the White House... kind of.

I mean, in a non-literal non-violent way, of course.

15. He Always Was Down With The Lingo

Really, though, it's just amazing that this picture even came about.

Such a perfect team.

18. At Least There's Always Something To Laugh About

Comedians will definitely have their work cut out for them over the next four years.

19. He's Been Waiting For This For So Long

I hope these images of Joe Biden being the awesome dude that we all know he is have given you a few moments to laugh, breathe, and hopefully relax a bit. You might want to keep these memes around, too — I think we're definitely going to need some comic relief in the next couple of years.

More like this
Twitter Has *A Lot* To Say About The "Single Penalty”
By Sam Ramsden
The Internet Can’t Get Enough Of Viktor & Rolf's Upside Down Dresses
By El Hunt
Twitter Is In Awe Of Taylor Swift’s “Lavender Haze” Music Video
By Jake Viswanath
Twitter Has No Chill As The 'Love Island' Villa Descends Into Chaos
By Darshita Goyal
Get Even More From Bustle — Sign Up For The Newsletter
From hair trends to relationship advice, our daily newsletter has everything you need to sound like a person who’s on TikTok, even if you aren’t.