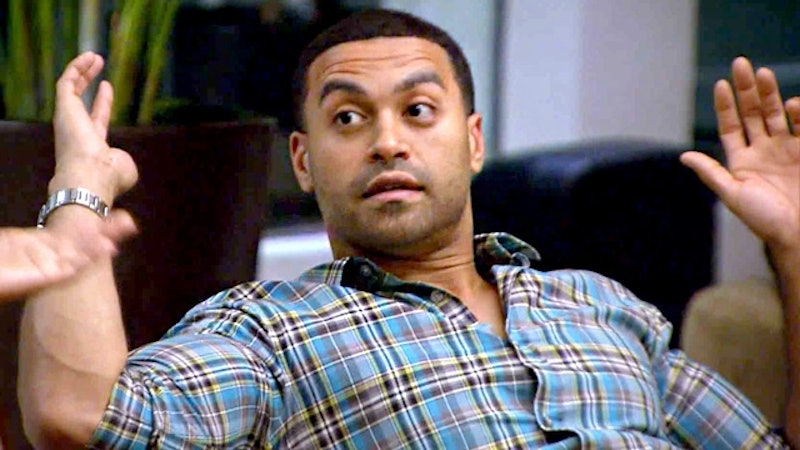 Phaedra Parks may be living the single life on Real Housewives of Atlanta Season 9, but the same can't be said for her former husband. On Monday, TMZ reported that Apollo Nida is engaged, though the identity of his fiancée remains unknown. TMZ claims both Nida and his soon-to-be wife will also participate in Season 9 of RHOA, so fans get ready for even more possible drama. Nida confirmed his engagement on Instagram Monday by writing alongside a photo of himself and the headline TMZ used, "You see that smile? That's how she makes me feel all over! #MyQueen #NidaFitness #TheNidaTeam #FreeApollo #Goodmorning."

Sources claiming to be close to RHOA production told TMZ that Nida and his mystery woman began dating two years ago before he went to prison in 2014, where he is serving an eight-year federal sentence for a fraud convinction. They reportedly got engaged "a couple months ago." According to TMZ, Nida's finacée lives in New Jersey somewhat close to FCI Fort Dix (the same prison where Joe Giudice is serving time), where she reportedly visits him two times a week.

Regarding Nida and his fiancée supposedly participating in RHOA Season 9, TMZ claims that Nida will only be heard on the phone and not seen. The same can't be said for his new lady love, who the site claims be both seen and heard. However, if you're hoping for scenes featuring she and Parks, don't hold your breath, because TMZ reports they didn't shoot any together. Though, Parks' reaction upon learning about Nida's new relationship was reportedly captured, so get ready for more fantastic facial expressions (like the one above) from Parks. As for the identity of Nida's fiancée, that is not yet known. Us Weekly reports that his fiancée "does appear on the show later in the season at one of the cast events."

In October 2014, Parks filed for divorce from Nida after almost five years of marriage. The divorce was officially finalized in November, Parks revelead in an interview with TMZ. After being asked if there was a chance of a reconciliation with Nida, she responded, "I never say never, but in this case, I don't think that will be a possibility. At the end of the day, we're friends and we have our kids together, so we'll always be friends. We'll always have a relationship."