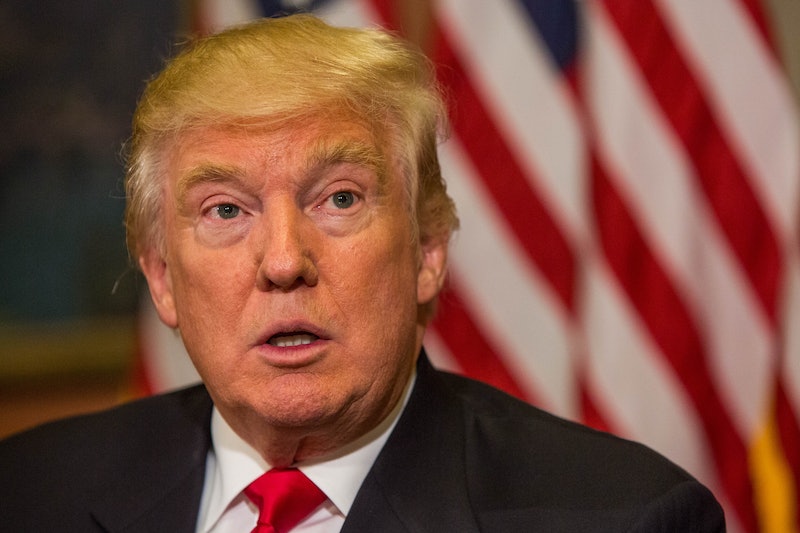 According to a report in the Wall Street Journal, Donald Trump wasn’t fully aware of what the president does when he won the election, and might still not be completely knowledgeable about the duties of the presidency. Anonymous sources told the Journal that Trump didn’t focus on the transition process prior to the election, because he didn’t want to jinx his chances of winning (!!!). This is terrifying news, but if you squint, there’s a way to interpret it optimistically.

Trump reportedly didn’t know that new presidents have to appoint an entire new staff to the White House, according to the Journal. As a result of the incoming president’s unpreparedness, President Obama is planning on spending “more time with his successor than presidents typically do” in order to make sure the executive branch is functional on Jan. 20, when Trump is inaugurated.

It isn’t entirely surprising that Trump lacks basic knowledge of how the presidency works. In addition to the fact that, by his own admission, he’s never read a single presidential biography and doesn’t read much in general, Trump has never worked in government, let alone the federal government, let alone the White House. This sort of information doesn’t teach itself.

All other things being equal, it is not a good thing when somebody wins a presidential election without knowing how the presidency works. But in the name of optimism, there is a sense in which maybe this is sort of good news.

It’s nothing new to say that Trump is dangerously unfit for the presidency. That’s old hat. But there’s a difference between being unfit and being unprepared. If you’re of the mind that Trump is a fascist demagogue whose policies will wreak untold destruction on America and the larger global order, it’s probably better that he doesn’t have a basic grasp on how the presidency functions. It’s very common for administrative and bureaucratic dysfunction to thwart a president’s agenda, and if Trump truly doesn’t understand how the office works, he’ll probably have a harder time implementing his policies.

The fact that Obama is getting more involved in the transition is also encouraging news. It’s depressing, for sure, that the first black president now has to babysit the man who spent years insinuating that he wasn’t born in the country. That is sad to think about. But this at least gives Obama an opportunity to orient the new administration from the get-go, which is as much as any Trump skeptic could possibly hope for.

All of this is true only in theory. In all likelihood, Trump will eventually learn how the presidency works, settle into the office, and take control. But at least in the beginning, perhaps more competent hands will be guiding the ship.