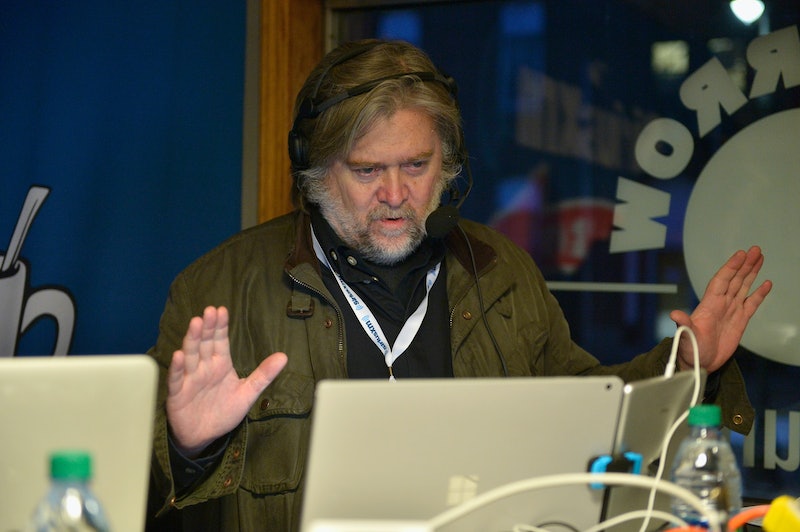 Donald Trump has chosen Steve Bannon, a misogynistic white nationalist and anti-Semite, to serve as his chief strategist in the White House. The decision has drawn predictable and justified backlash from all sorts of civil rights groups, and if you'd like to call your Congressional representative to protest Bannon's appointment, just click that link, type in your ZIP code, and you'll see the contact information for your congressperson.

Bannon was publisher of the alt-right media site Breitbart prior to becoming the CEO of Trump's presidential campaign. Here are but a few of the headlines the site published during his tenure:

Bannon's ex-wife claimed in court that he "said he doesn't like Jews," and didn't want his children attending schools with Jewish students. He's the kind of person who calls the American Civil War "the War of Southern Independence" and claims it was fought over economic issues, not slavery. One Breitbart piece published with his approval referred to former Congresswoman Gabby Giffords, who miraculously survived a bullet to the head from a would-be assassin in 2011, as "the gun control movement's human shield." He was charged with domestic violence and battery in 1996, though the case was eventually dismissed. Bannon's spokesperson said of the case, "The bottom line is he has a great relationship with the twins, he has a great relationship with the ex-wife, he still supports them."

Civil rights groups are coming out of the woodwork to oppose Trump's appointment of Bannon to a top White House post. The Southern Poverty Law Center, the Anti-Defamation League, J Street, the Council on American-Islamic Relations, and People for the American Way have all called on the president-elect to rescind Bannon's appointment. So have Nancy Pelosi, Bernie Sanders, Harry Reid, and several other members of Congress.

"He is legitimately one of the worst people I've ever dealt with," former Breitbart writer Ben Shapiro told TIME magazine. "He regularly abuses people. He sees everything as a war. Every time he feels crossed, he makes it his business to destroy his opponent."

Likewise, neo-Nazis have been positively and vocally gleeful that Bannon will have the next president's ear. Former Ku Klux Klan Leader David Duke called Bannon an "excellent" choice for top adviser, while Richard Spencer, publisher of the white nationalist Radix journal, called it the "best possible position" for Bannon to serve in. The head of the American Nazi Party was similarly encouraged by Bannon's appointment.

In response to the backlash, Trump surrogate Newt Gingrich said that Bannon couldn't possibly be anti-Semitic, because he worked in the banking industry. (That, itself, is kind of an anti-Semitic thing to say.)

Calling your local representative to oppose Bannon probably won't convince Trump to change his mind. Top advisers don't require congressional approval, so there's not much lawmakers can do to stop it. Trump could possibly back down in the face of public pressure, though, so it never hurts to make your voice be heard.