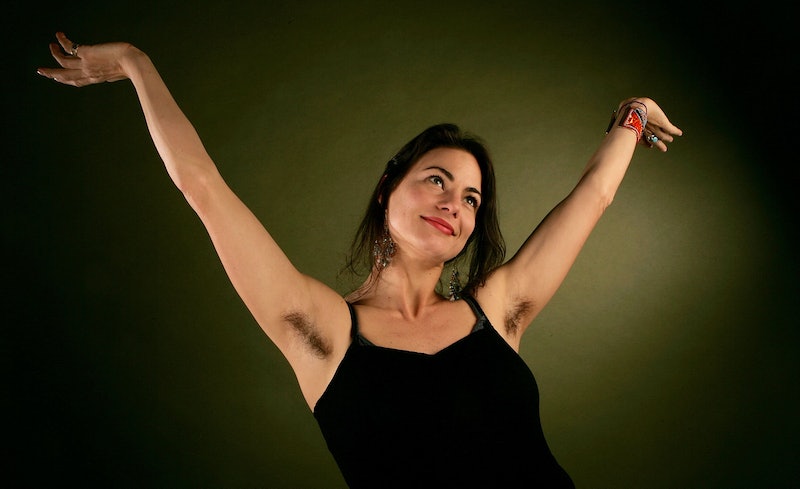 A group of feminists in the UK has created Armpits4August, a month-long movement to encourage women to embrace their body hair... everywhere, not just in armpits and underarms.

The movement invites all women to take a month off from body hair removal in order to both challenge conventional notions of femininity and increase awareness about polycystic ovarian syndrome (PCOS), which can often cause an increase in body hair. Participants grow their underarm hair for one month, and ask friends and family to sponsor them. All funds raised by Armpits4August will go to Verity, a UK-based PCOS charity. The Guardian describes Armpits4August as "like Movember, but with a decidedly feminist twist."

What's interesting to me about this movement is not necessarily the feminist aspect, but that of increasing the visibility of people with PCOS. (While I think it's awesome and feminist to let your body hair grow, it's not necessarily antifeminist to shave, pluck, or depilate, either). PCOS is a very common condition (as many as one in 15 women) that can affect different aspects of a woman's life, from fertility to body weight and yes, body hair (It's also common in trans-men). Still, PCOS is not often something I hear about in the media, aside from a few articles in women's magazines. Perhaps that's because PCOS isn't as "serious" or life-threatening as breast cancer, ovarian cancer, or other health issues that affect females. Still, the condition can have a powerful lasting physical and mental influence on people's lives. Several of the women quoted in The Guardian's coverage of Armpits4August spoke honestly about the ways that PCOS (and hirsuteness) has shaped their lives, self-esteem, and body image.

Armpits4August is trying, literally, to increase the visibility of PCOS sufferers. By making people see hairy armpits on women, they're hoping to force them to think about both PCOS and our culture's prescribed beauty work, the standards we set for women. It's a worthy goal.