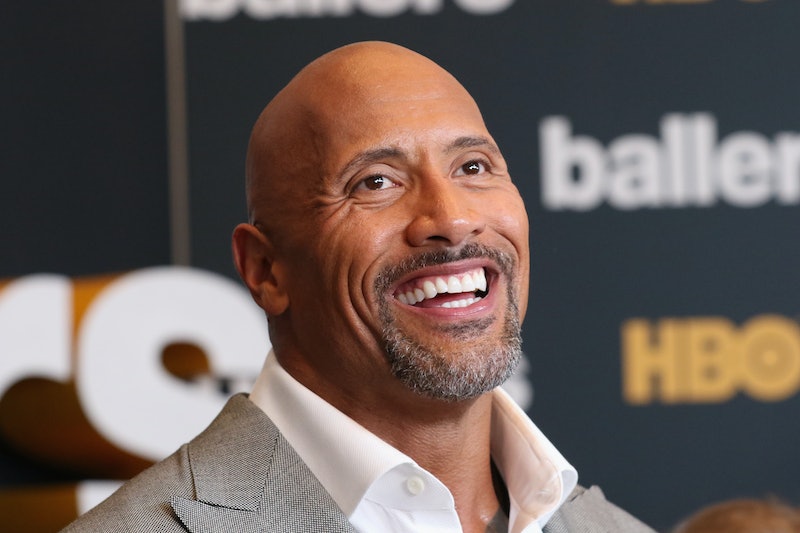 If you didn't yet know, Dwayne Johnson is People's Sexiest Man Alive 2016. I, too, am impossibly pleased with this selection. I was first introduced to Johnson as "The Rock" by my older cousins who had a major obsession with all things wrestling growing up. Back then, he wasn't much to me other than a seemingly menacing dude who had really great control over his eyebrow movements and wore really tight spandex. Over the years, though, The Rock's persona changed. I don't think anyone but us '90s kids even call refer by his alter ego anymore. The wrestler got into acting, dropped his wrestling shtick, and got real.

As it turns out, the real "Rock" was infinitely more entertaining and endearing than any overdramatized act that the wrestling world could come up with. If you follow Johnson on social media, you know that he's way more than a pretty face and an impossibly chiseled body. The actor uses his fame for good and it's probably the most enticing thing about him. Actually, even when you leave fame out of it, his dedication to his family, friends, pets, and home life is equally as enchanting.

2. It Kind Of Goes Without Saying

3. But His Real "Sexy" Moments Are When He's Being An Awesome Dad

Are you crying, too?

4. Or When He's Imparting Wisdom

I certainly do smell what The Rock is cooking.

Oh, wait. He's not even in this picture. Anyway...

6. When He's Not Afraid To Look A Little Silly

A little healthy self-deprecation is where it's at.

This is so important.

8. When He's All About His Family

What a cool crew.

9. When He's Working On His Fitness

*Gets out magnifying glass*

Nothing like a dude who's studious and serious about his career.

12. When He's Being Super Gentle With Animals

13. When He's Being Generous

Making all the rest of us kids look like total ungrateful brats. Damn you, Dwayne.

14. When Takes The Time To Meet Fans

And actually spends legitimate time with them.

15. When He's Just Being A Normal Dude

Despite leading a very abnormal life.

16. But, Mostly? Because He Stays Humble

IDK about you, but to me? Humility is impossibly attractive.

The Rock is People's Sexiest Man Alive because his looks match his heart.

More like this
Olivia Rodrigo Manifested Finally Meeting Demi Lovato
By Jake Viswanath
Taylor Lautner Copped To Finding Jacob "A Little Annoying" In Twilight
By Stephanie Topacio Long
James Cameron May Come To Regret His 'Titanic' Door Experiment
By Stephanie Topacio Long
Reese Witherspoon Confirms This Fan Favorite Will Return For 'Legally Blonde 3'
By Jake Viswanath
Get Even More From Bustle — Sign Up For The Newsletter
From hair trends to relationship advice, our daily newsletter has everything you need to sound like a person who’s on TikTok, even if you aren’t.