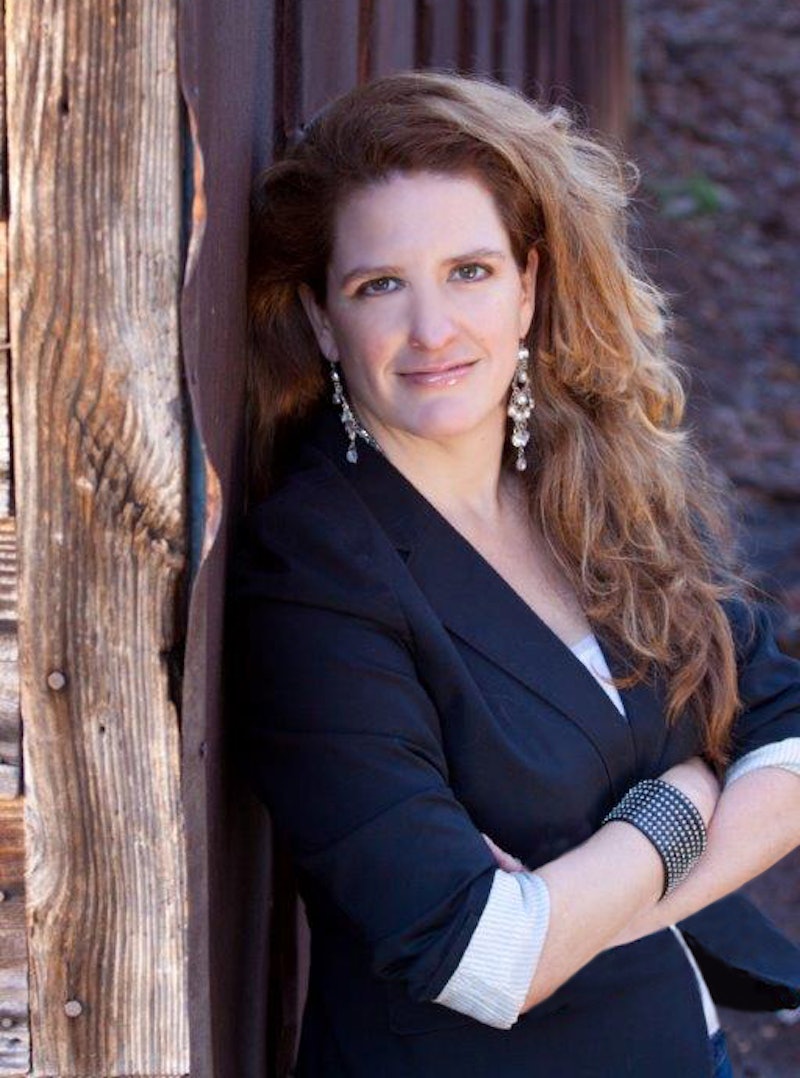 Maybe you've heard stories about the notorious Straight, Inc., a drug treatment facility for teens that became the subject of numerous abuse allegations during its 17 years in business. Maybe you've heard the horror stories, but Cyndy Etler lived them. In her young adult memoir, The Dead Inside, out April 1, 2017, Etler details the 16 months she spent behind locked doors at Straight, Inc. — a treatment program called "a concentration camp for throwaway kids" by an official for the American Civil Liberties Union.

Cyndy was just 14 years old when she ran away from home — and her abusive stepfather — and attempted to forge a life for herself on the streets. She'd barely even smoked pot, but after a month of living homeless, her mother sent her to the controversial drug rehab center. From the outside, Straight, Inc. seemed to be exactly the sort of place a "troubled teen" like Cyndy needed. From the inside, it was a bizarre, cult-like prison that used unethical, often abusive methods to rehabilitate the children. In The Dead Inside, Etler recounts the painful, disturbing time she spent in Straight, Inc. — a place where she suffered from sleep deprivation, physical abuse, and brainwashing.

These days, Cyndy Etler is a high school department chair, a teen life coach, and an author. She has spent much of her life helping troubled teens the right way — with respect and understanding and care. Bustle is proud to present a sneak peek of The Dead Inside — see the cover and read an excerpt below:

EVERYONE MUST WEAR SHOES AND SOCKS

Something weird is going on. Something even weirder than the regular daily freak show. I can feel it. I can hear it. I just can’t see it yet.

Other than Amanda showing up, it’s been a normal day—people singing stupid songs; kids sharing about their druggie pasts; the teen staff strutting to thebarstools like they’re on the red carpet. But then the side doors open, and all these kids I’ve never seen before come flooding in. They stand around the edges of group, wedged tight at the shoulder in a human fortress. It’s creepy and just…wrong.

A half hour later, on some invisible cue, they swarm around us, claw us up from our seats, and carry us across the group room. The door goons are gone, so they march us right through the back doors and into this empty room. The walls are bare brick and the carpet is new-jeans blue. We’re tugged into rows, because with no talking allowed and no chairs, how do we know where we’re supposed to sit? We should know, though. I can tell by the way my carrier is yanking me around. She practically tears my belt loop off.

A half hour later, on some invisible cue, they swarm around us, claw us up from our seats, and carry us across the group room. The door goons are gone, so they march us right through the back doors and into this empty room.

Once we’re all positioned and sitting cross-legged—with the boys’ side so close, if I whistled, I’d ruffle their bangs—the bad guys show up: Matt King and the mean blond smiler.

The people around me start motivating and I do it too, because I don’t want a fucking demon at my back. Without anyone telling me, I put my arms up and shake them around. And that’s what gets Matt’s attention. He’s scanning the tightly packed room, and his eyes sear into me. They look even darker than yesterday.

The blond staff snaps her head my way. Her smile blinks to life.

My fists are still up by my ears. This isn’t what I was motivating for. I didn’t actually want to be called on.

“Stand up!” he says, fake friendly.

My fists are still up by my ears. This isn’t what I was motivating for. I didn’t actually want to be called on.

My rubbery legs make it hard to stand. It’s silent except for the rustle of my clothes.

“So…?” Matt says from his barstool.

“What?” I say back. But I say it confused, not snotty.

“What? What. What is that this is family rap. You need to tell us about an incident from your past, an incident involving your family.”

Four hundred eyes and chins are leveled at me. They make it hard to think.

“Were you a good girl in your past, Cyndy? Were you nice and sweet to your family?”

“I’m not asking about them. Were you nice and sweet to your family?”

“That’s right, Cyndy! You’re doing great. Now tell us about an incident with your family where you acted like your druggie self.”

I just stand there. I don’t have a family. I have a mother and a sister and a stepthing who’s the devil, plus his kids. And “an incident”? I have no idea what I’m supposed to say.

He’s still staring at me, his eyebrows pointed into sharp little horns.

“I thought I’d give you another chance, Cyndy. But you’ve wasted enough of this group’s time. Have a seat.”

I can’t sit down fast enough, so I fall instead. My hand catches a girl’s shoulder, but she jerks it off like she hates me. I feel it, like a heat.

Next the girl who hates me stands up, to share how she made her father beat her. “I remember, this one time?” she starts out.

That’s Straight code for, Here’s why my parents hate me enough to leave me here.

“I remember saying to my dad, ‘Maybe if you didn’t drink so much, Mom wouldn’t need therapy.’ I said that to my dad. I ended up in the hospital with a broken arm after that sweet nothing. And I deserved it, one hundred percent. He fed me and clothed me and kept a roof over my head, and that’s the thanks I give him? I can’t believe he’ll even still look at me.”

That’s Straight code for, Here’s why my parents hate me enough to leave me here.

Matt doesn’t just let the group tell her Love ya, he leads it. Before she even sits, he’s all, “Love ya, Sammie!” so loud it rattles the doorknobs.

The next slap of weird comes when they push us back into the never-ending beige of the group room. The linked chairs are still in rows, but they’ve been turned around to face an ocean of gray folding chairs. There’s enough seats for all of Communist China. It’s like a chair warehouse, which, ding! That’s what this place is! It’s a warehouse, literally. It’s a giant storage locker where, for a fee, parents can disappear their fuckups and rejects.

That’s another reason I’ll be outta here tomorrow. No way does my mother have the money for this place, when she can barely put five dollars of gas in her car. Twenty-four hours, and I’ll be on my way back to Jo’s; forty-eight and I’m in Steve’s room. How could their parents not let me stay with them, when they hear what I’ve been through?

I can feel my Levi’s on my thighs, my denim on my back. Just thinking about Levi’s feels so good, I barely notice that I’m picking up a dinner tray and getting pushed back to the chairs. In my mind I’m like, one hundred percent in Levi’s…until the hand in my pants lets go while I’m still standing.

“Uh?” I kind of grunt, turning my head to the demon behind me.

Feeling like the balloon some little kid let go of, I look down the row, and oh my God! It’s not the front row! I’m out of the bull’s-eye!

I get a mean Shhh! for a reply, but it’s drowned out by this earsplitting SCREECH. Since I’m standing, I can see what’s going on. But, God. I wish I couldn’t.

It’s Amanda. She’s surrounded by demons, and she’s fighting them all at once. Crouched at her back is the biggest guy you’ve ever seen. He loops his arms around her from behind, linking his hands in a hate hug. But even worse is what they’re doing to her arms. Two guys are gripping her wrists, Jacque style. Matt King style. They’re spreading them like airplane wings, out and down and fast. Tomorrow she’ll have handcuff bruises. She’s telling them she hates them with animal sounds, not words. I don’t know if I’m more scared for her or for them.

She’s telling them she hates them with animal sounds, not words. I don’t know if I’m more scared for her or for them.

A fist hits my spine, so I move down the row. I’m trying not to hear it all: the screams, the thwap of flesh on flesh, the shriek of metal as a kicked chair scrapes across the floor. When I get down to my seat, I can’t help it. I look back at Amanda right as the big guy snaps his hand over her mouth. He’s—he’s gagging her. Her face is red, and it’s getting redder. Her eyes bulge out, and she slams her head forward, then back.

There’s a [splat] as her skull hits his, and a shree! as Amanda throws opens her throat. She head-cracked the gagger. She got his hand off her mouth.

“Gimme my fucking Doc!” she screams.

She rips her bare foot away from the guy who was pinning it; he lunges and tackles her shin. Other guys are running at her. That’s when I sit down. I sit and pray for somewhere to put my tray, so I can plug my ears. Amanda’s noises are shredding me. It’s like she knows what she’s doing, fighting off all these guys. This is why she needs armor clothes. I don’t want to see or hear or know that it’s happening again.

We spin around to watch Amanda, who’s being carried across the room by six guys. She’s a human casket. She’s got one boot on, and her body’s rippling, trying to shake the boys off her. And she’s howling.

Another guy runs over and jams a hand over her mouth. His teeth glint through his smile.

In English class, one of Mrs. Skinner’s vocab words was “maxim,” which is a wise little phrase about life. She gave us this example they use in Japan, to make sure everybody acts the same as everybody else: “The nail that sticks up gets hammered down.” Amanda is the sticking-up nail. But she’s not smooth and straight, like a regular nail. She’s all knotted up. They can’t hammer her flat, so they’re killing her instead.

Amanda is the sticking-up nail. But she’s not smooth and straight, like a regular nail. She’s all knotted up. They can’t hammer her flat, so they’re killing her instead.

The funeral procession ends as the boys carry Amanda through a door to the left of the kitchen. It’s a beige door, painted to match the walls, like they don’t want anyone to know it’s there. The door slams; the group room’s silent. It sounds like the end of the world.

More like this
Meghan Trainor & Daryl Sabara Are Expecting Their Second Baby
By Jake Viswanath
24 History-Making Black Women You Probably Didn't Learn About In School
By Ayana Lage and JR Thorpe
25 Inspiring Quotes From Black Women To Celebrate Black History Month
By Kyli Rodriguez-Cayro and JR Thorpe
What Is Pamela Anderson’s Net Worth? She Was Never Paid For Her Stolen Sex Tape
By Hugh McIntyre
Get Even More From Bustle — Sign Up For The Newsletter
From hair trends to relationship advice, our daily newsletter has everything you need to sound like a person who’s on TikTok, even if you aren’t.