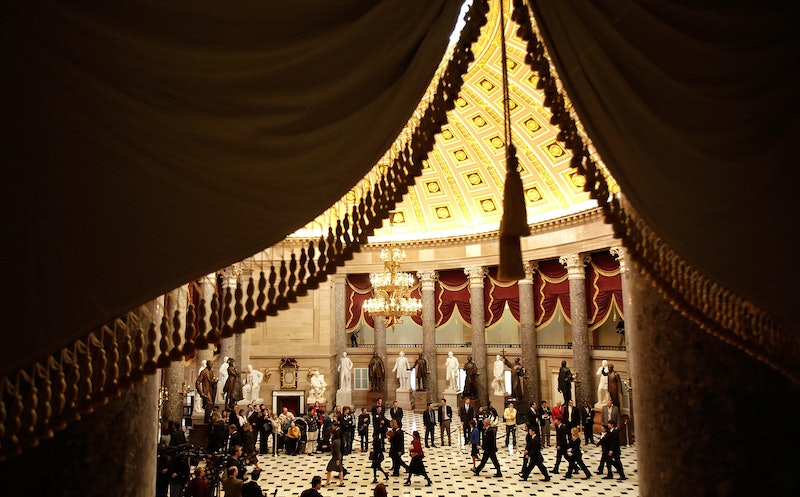 If you're one of the 4.3 million people who have so far signed the Change.org petition asking this election's Electoral College to vote for Hillary Clinton on Dec. 19, you might be wondering how to proceed on to the next step: actually contacting your state's electors. Unfortunately, there's no official procedure to follow, but on the upside, since most electors are public officials, it's not difficult to find a method of getting in touch.

Finding the list of your state's electors can sometimes be difficult. Some states, such as Alabama, Montana, Wisconsin, and Arizona, make the information available to the public, while other states make the information harder to track down. Fortunately for those hoping to change a few minds in Clinton's favor, POLITICO published a nearly complete list of those in this year's Electoral College.

As previously mentioned, most of the people chosen to finalize the results of this presidential race in a few weeks are public figures known for being active within the political party they were nominated by. A simple Google search of most of the names listed will lead to the official websites of foundations, local government offices, partisan organizations, etc. The majority of these electors provide emails, phone numbers, or mailing addresses for members of the public to get in contact; on occasion, there will be no direct line of communication and the closest option will be to leave a message for the office in which they happen to work and hope for a response.

While the effort to stop Trump's presidency through an Electoral College upset is unlikely, some members on the inside have spoken up to help. Three Democratic electors — P. Bret Chiafalo, Micheal Baca, and Robert Satiacum — are trying to convince 37 of their Republican colleagues not to vote for Trump in December. The trio doesn't support Clinton either, however, which wouldn't benefit her if these electors end up persuading their peers to go with a write-in candidate.

"A lot of 'em use bad, rough language," Bangerter told The Spokesman Review. "Nothing I feel intimidated over. But we're watching it very closely. They've got our home phone numbers, our cell numbers, our emails, our Facebook. We're just getting an orchestrated barrage from the left. Caleb told me he had over 200 and something when he checked this morning."

Needless to say, the approach Bangerter describes is probably not the most effective way to convince these electors to change their minds.