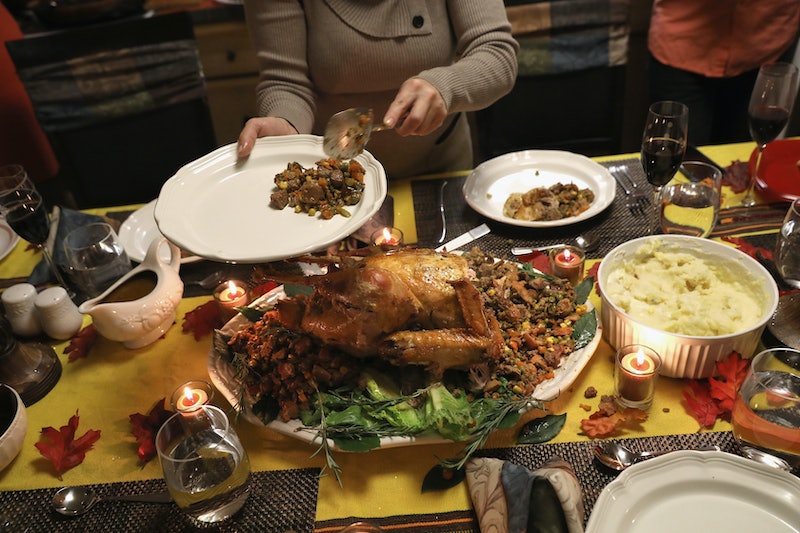 When it comes to Thanksgiving dinner, my mother's stuffing is the one food item on the table that I most look forward to eating every single year, and when it comes to leftover Thanksgiving sandwiches, it's that same stuffing that seals the deal for me. So how long does leftover stuffing last? It's an important question if you like devouring Turkey Day leftovers as much as I do come the Friday, Saturday, and Sunday after Thanksgiving.

Before you start layering your leftover stuffing on to the turkey, gravy, and cranberry sandwich you're in the middle of making, you want to be sure you're not going to be eating something that will make you sick. Essentially, heat kills bacteria and freezing temperatures kill bacteria, so if your food spends anytime in between those two extremes, you should know what you're working with (especially considering the fact that stuffing is cooked inside of the turkey, making it more prone to bacteria than foods on the Thanksgiving table that don't touch meat).

You're going to be doing a lot of cooking and a lot of eating this November 24, so make sure you brush up on your leftover knowledge below, especially when it comes to the stuffing (because really, what other day of the year do you eat stuffing that's been cooked inside of a giant turkey?).

How Long Does Leftover Stuffing Last?

According to StillTasty, leftover stuffing only lasts three or four days in the fridge once it's been made. If you want to have it last a little longer, you can freeze if for up to a month. You want to be sure to refrigerate your leftover stuffing within two hours of having cooked it because bacteria begins to grow rapidly once food temperature makes a significant drop.

How Should You Store Leftover Stuffing?

Like many of your Thanksgiving leftovers (and really, any and all cooked foods), Food Network recommends storing your food in thin, air-tight containers. It also advises against stacking hot leftover Tupperware containers inside of your fridge because the stacking can actually trap heat.

How Do You Know When Stuffing Has Gone Bad?

The simplest way to tell if your stuffing has gone bad is to sniff it. StillTasty states that any stuffing with an "off smell," or even an odd appearance, should be trashed immediately. They also make it a clear point not to taste the stuffing to determine whether it has gone bad, as this can make you sick.