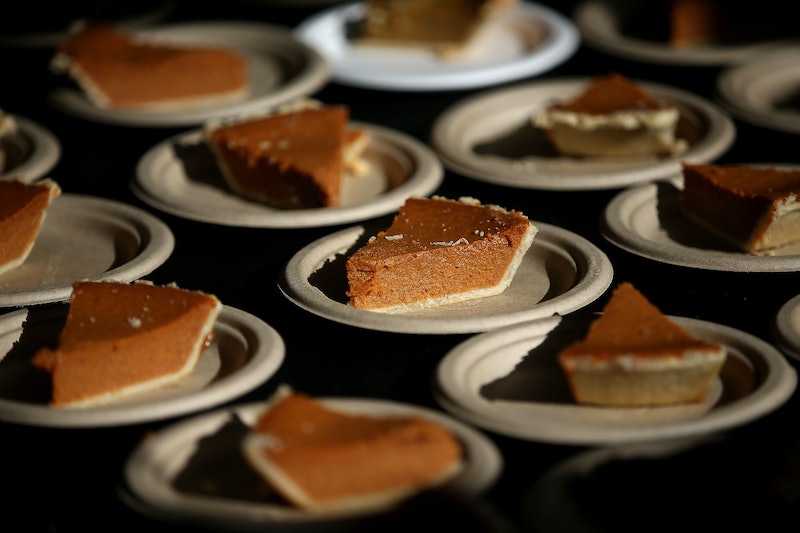 When you think up Thanksgiving desserts, pumpkin pie is probably the first one that comes to mind! That being said, have you ever wondered: why do we eat pumpkin pie on Thanksgiving? If you think it's as simple as "the colonists ate it," then you had better think again. As it turns out, the Thanksgiving meal we eat today is quite different than the one that was eaten in 1621, and there are a handful of reasons as to why.

As we've all learned from U.S. history classes, the colonists' first few years were not easy ones, especially in regards to the harvest. The colony of Jamestown actually had a period called "The Starving Time" during the winter of 1609 and 1610, according to Historic Jamestowne. That being said, all of the foods that we see on our present day Thanksgiving table weren't necessarily known or present at the colonists' first feast.

So what did the colonists eat? If I've piqued your curiosity, then read on. You'll learn about the origins of pumpkin pie in relation to Thanksgiving, as well as some of the foods that were likely eaten during that original Thanksgiving feast between the colonists and the Native Americans.

Did The Colonists Eat Pumpkin Pie?

Despite the fact that pumpkin pie has become one of America's favorite Thanksgiving desserts, it was actually not present at the original feast of 1621. In fact, according to History.com, the pilgrims wouldn't have even had butter or flour for making a pie crust, let alone an oven for baking. Some people have speculated that they might have hollowed out pumpkins and filled them with milk, spices, and honey, making a custard, but nothing has ever been proven.

Who Started The Pumpkin Pie Tradition?

The Washington Post credits popular magazine editor, Sarah Josepha Hale, as having started the pumpkin pie tradition when she read about the original 1621 feast and published recipes for turkey, stuffing, and pumpkin pie in an attempt to make a model for an annual holiday in the middle of the nineteenth century. These recipes had nothing to do with the colonists, and it was only because of Sarah Josepha Hale's persistence that they became a staple in today's Thanksgiving menu.

You might be surprised to learn that turkey also wasn't included at the original 1621 feast. The Smithsonian states that though we don't know for sure what was had at the original Thanksgiving, that wildfowl, corn, porridge, and venison were all likely suspects. Basically, we owe Sarah Josepha Hale quite a bit when it comes to our present day Thanksgiving menu.