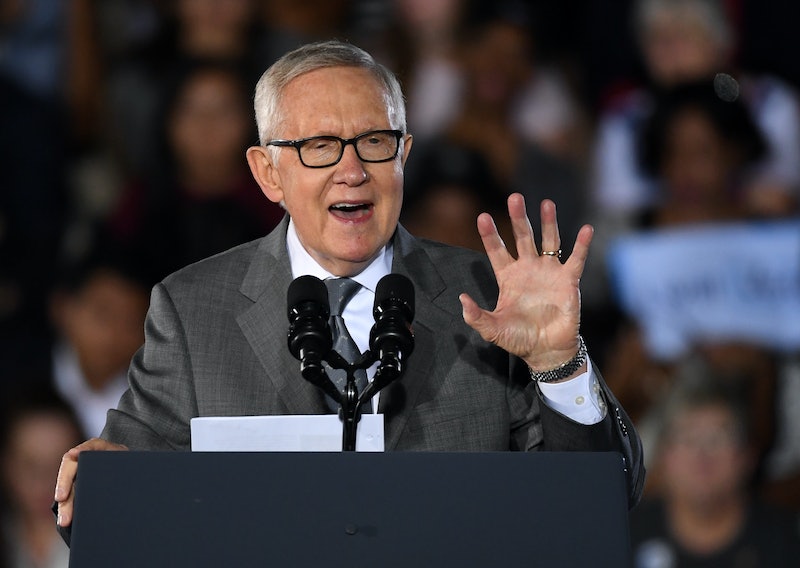 On Tuesday, Senate leaders issued their first speeches since the election. The results were hard to swallow for many Democratic lawmakers, and especially the retiring Senate minority leader Harry. As the transcript of Harry Reid's speech shows, he and his Democratic colleagues had hoped not only for a president on their side of the aisle to help pass their agenda but also to gain a majority in the Senate as well. They missed that mark, and we're heading into 2017 with Republicans leading the White House, the Senate, and the House of Representatives. But Reid's focus during his speech wasn't on the Republican agenda broadly, or on what Democrats plan to do going forward. He focused tightly on what he sees as the immensely troubling wave of reported hate-motivated incidents since Trump's win.

Reid has been an outspoken opponent of Trump throughout the election. Days following Trump's upset, Reid referred to the president-elect as "a sexual predator who lost the popular vote and fueled his campaign with bigotry and hate," PBS reported. In his speech on Tuesday, Reid enumerated the many hate-motivated incidents that have been reported in the past week, attributing them to Trump's election victory.

Following a tribute to Gwen Ifill, Reid had the following to say about Trump:

Mr. President, I've been in politics for five decades and I have not seen anything like what we're seeing today in America. The man who lost the popular vote by 2 million votes is now the president-elect. I'll repeat that: The man who lost the election by 2 million votes or more is now the president-elect. And his election sparked a wave of hate crimes across America. This is a simple statement of fact. It raises a critical question for us as a country, as a nation: How do we respond to the election of Donald Trump?

Democrats want to work with Mr. Trump when they can. I understand and respect that impulse, because Democrats like to get things done. That's why many of us are in government — I think most in the first place. For example, Democrats were trying for decades — multiple decades — to get Republicans to invest in our deteriorated infrastructure. What kind of a make-up do we have there in infrastructure... is it a trillion dollars? Two trill? Some say three trillion dollars. It's really in bad need of help and repair. It's an automatic job creator. Each time we tried to do something over these decades on infrastructure, Republicans obstruct it. So if we can finally get Republicans to make job-creating infrastructure investments we've been seeking for years, that will be a welcome development for the Senate and the country. If Trump wants to pursue policies that will help working people, Democrats will take the pragmatic approach. Democrats have a responsibility to improve the lives of Americans. All lives.

Outside this Senate chamber, you can hear hammering. We have workers who are hammering a platform for the Inauguration ceremony. It'll take several months to do it, but it'll be done right. In 65 days, Don Trump will step onto that platform. For four years, he will wield the loudest and most powerful microphone in the world. But even as those workers hammer away on Trump's platform, even as we as leaders accept the results of this election, we must also give voice to those who are afraid. Because there are many that are afraid.

Indeed, a majority of Americans opposed Donald Trump. Many Republican colleagues in this chamber opposed Trump. They weren't alone. Trump will be the first president to take office after losing the popular vote by two million. Every day for the past week, a majority of American voters have awakened to a difficult reality. Not only did that man who lost the popular vote win the election, but his election sparked a rise in hate crimes and threats of violence. Since Election Day, the Southern Poverty Law Center has reported hundreds of incidents of harassment and intimidation — the last count was 315 from their calculations — overwhelmingly hateful acts that were anti-Muslim, anti-Hispanic, anti-African American, anti-women, anti-LGBT, anti-Semitic, and anti-Asian.

One of my staffers has a daughter in middle school. I've known that little girl since she was a little baby. The day after the election, the principal addressed the entire student body on the school's P.A. system because two incidents had occurred that he wanted to talk to them about. In one instance, a boy yelled at a Latina student, telling her that he was glad she was going to be deported now that Trump was president. In another instance, a boy was sent home for yelling the most derogatory and hateful term at an African-American student. The boy justified himself by saying he used that language now that Trump was president. In Spokane, Washington, the Martin Luther King Center there was defaced with the same hateful word.

Those are only a few examples of what people close to me have related. But these kinds of disturbing accounts have been heard across America. I have here, Mr. President, a compilation of these incidents — one is from NBC News, another is from another publication — hundreds of incidents from the last few days. I would ask that it be made part of the record. ... That was just entered into the record. Those references made are awful, are hateful, they are frightening, they are scary. I invite any of my colleagues to read these horrible acts... I invite any senator, Democrat or Republican, to come right down to this floor today and defend any one of them, these examples of hate and prejudice. I don't believe anyone in these chambers wants to defend hateful acts that are being committed in president-elect Donald Trump's name.

They lead to one unavoidable conclusion: Many of our fellow Americans believe that Trump's election validates the kind of bullying, aggressive behavior Trump modeled on daily basis. How do we teach our children that bragging about sexual assault is abhorrent if we rush into the arms of a man who dismisses it as "locker room talk"? If we fail to hold Trump accountable we all bear a major responsibility for normalizing his behavior.

Here's a letter from a seventh grader from Rhode Island. She wrote it the day after the election. I quote from the letter of a seventh grader: "I'm extremely scared, especially being a woman of color, that the president of the country I was born and live in is making me feel unsafe when I actually shouldn't feel unsafe. It's even scarier because this man who is now president of the United States of America has said such rude, ignorant, disrespectful things toward women and all different types of people is now in charge of our country. I want to feel safe in my country, but I no longer feel safe with someone like Donald Trump leading the country." End of letter.

Our presidents are supposed to make people feel safe. But on Wednesday, a seventh-grade girl woke feeling frightened to be a woman of color in America because Donald Trump was president-elect. If we ignore her voice, and other voices, this seventh grader will be left to conclude that we as a nation find her fear acceptable. How do we show her that she doesn't have to be afraid? The first step is facing reality. No matter how hard the rest of us work, the main responsibility lies within the man who inspired the fear. President-elect Trump must act immediately to make America make that seventh-grade girl feel that they're welcome in his America.

Healing the wounds he inflicted will take more than words. Talk is cheap, and tweets are cheaper. Healing wounds is going to take action. But so far, Mr. President, rather than healing these wounds, Trump's actions have deepened them. As one of his very first, if not his first... official act, he appointed a man who is seen as a champion of white supremacy as a number one strategist in the White House. Number one, everybody else under him. According to CNN, and I quote, "White nationalist leaders are praising Donald Trump's decision to name Steve Bannon as chief strategist." In the same article, white nationalist leaders say they see Bannon "as an advocate for policies they favor." And, according to the Southern Poverty Law Center, Bannon "was the main driver behind Breitbart becoming a white ethno-nationalist propaganda mill." When asked to comment on Bannon's hiring, KKK leader David Duke told CNN, "I think that's excellent." Court filings stated that Bannon said "that he doesn't like Jews, that he doesn't like the way they raise their kids to be whiny brats and that he didn't want his girls to go to school with Jews." That's a court document.

By placing a champion of white supremacists a step away from the Oval Office, what message is Trump sending to the young girl who woke up Wednesday morning in Rhode Island afraid to be a woman of color in America? It's not a message of healing. If Trump is serious about seeking unity, the first thing he should do is rescind his appointment of Steve Bannon. Rescind it. Don't do it. Think about this. Don't do it. As long as a champion of racial division is a step away from the Oval Office, it will be impossible to take Trump's efforts to heal the nation seriously.

So I say to Donald Trump: Take responsibility. Rise to the dignity of the office of president of United States instead of hiding behind your Twitter account, and show America that racism, bullying, and bigotry have no place in the White House or in America.