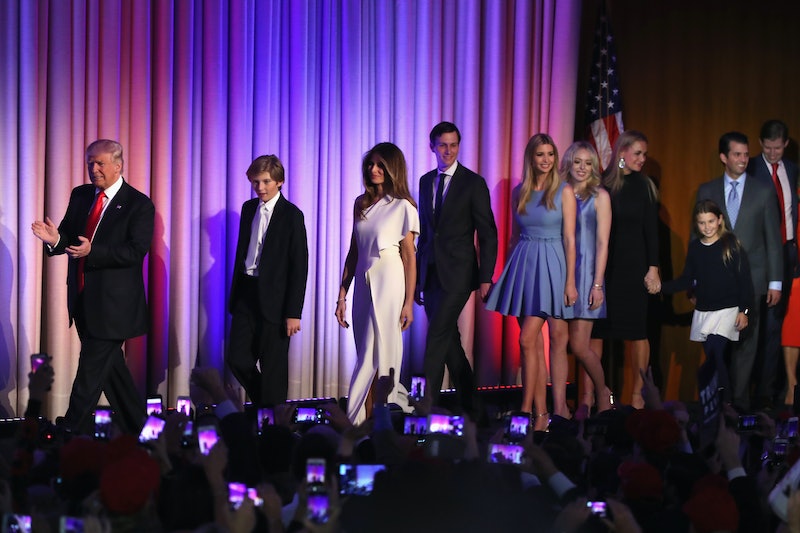 On Sunday, President-elect Donald Trump and four of his five children appeared on 60 Minutes in their first television interview as first family. But after the appearance, Ivanka Trump faced criticism for using the primetime appearance as a springboard for her fine jewelry line.

The day after her appearance, a group of reporters from the New York Times and Vogue reportedly received an email from Ivanka Trump Fine Jewelry titled "Style Alert" that described how soon-to-be First Daughter Ivanka was "wearing her favorite bangle from the Metropolis Collection on 60 Minutes," according to the Times. And this was not the first time Ivanka has mixed business with the presidency. She wore her own brand of shoes and jewelry at the RNC, tweeting a photo from her personal Twitter account the next day stating, "Shop Ivanka's look from her #RNC speech" with a link to buy.

What makes Ivanka's most recent product placement significant is what it tells us about the future. The Trumps will still have an operational dynasty while Trump is president, even though presidents before him have put their assets in a blind trust, according to a recent episode of The Rachel Maddow Show. Instead of making that line clear, it seems that Trump is keeping his family businesses operating while president with his children as its leaders.

To add to that, there are conflicting reports about whether or not the Trump transitional team requested top security clearance for his eldest three children and son-in-law (Ivanka's husband), who are on the presidential transition team executive committee. A transitional team official has denied Trump requested this, according to USA Today, but if his children are granted the security clearance, they could have certain access to information while running his businesses at the same time, something many find problematic.

Many voters stood behind Trump because they craved the opposite of the Clinton political dynasty. They felt he was a real changer outside of the Washington insiders, and ridiculed Hillary Clinton for her decades-long career in politics as first lady and her other roles in Washington. While there are right-wing media outlets celebrating the end of the Clinton dynasty, there's an irony in that the Trumps already building their own dynasty. Couple that with Trump gathering almost all Washington insiders for his cabinet and transitional team — whom he told 60 Minutes he "had" to have on his team.

The Trump presidency, complete with a fully operational business and his children by his side, is shaping into a dynasty. This isn't "Make America Great Again." It's more like "Make America The Same Again."