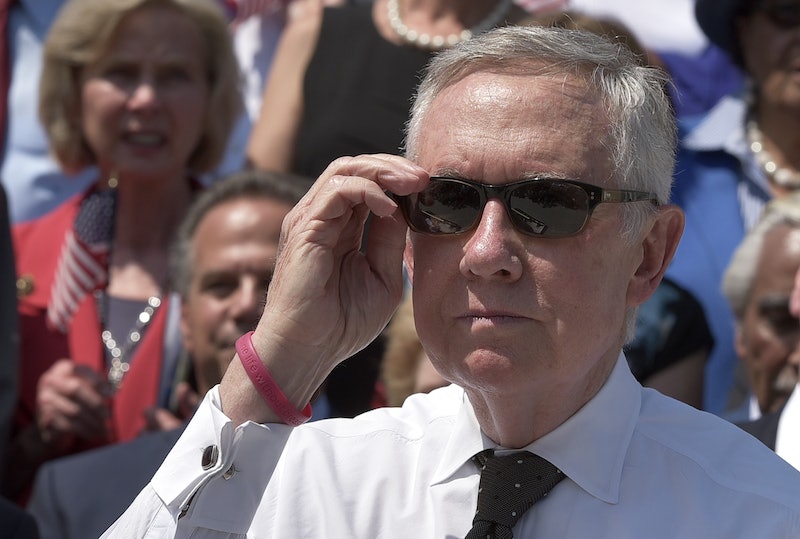 Since Donald Trump won the presidential election last week, it's clear that the Democratic Party has been caught every bit as much off-guard as much of the rest of the country was. And, with the Republican Party rapidly lining up behind the incoming president-elect, it's clear that Democrats are being pulled in two competing directions ― either try to tamp down tensions and protect transition of power, or press the fight against Trump in no uncertain terms. And one of the Democrats' outgoing leaders is choosing the latter route: Harry Reid is trying to stop Trump's normalization all by himself, refusing to move past the at-times horrifying campaign the Republican nominee rode to the White House.

The dividing line is best illustrated by how different Reid's reaction has been from that of President Obama. Rather than voice any displeasure or criticism, Obama seems to have devoted himself fully to achieving just two more goals: maintaining faith in the smooth transition of power, and somehow preparing a volatile neophyte to be president in just two months.

Reid, on the other hand, has been launching broadsides against Trump. It began just days following his victory, when Reid released a statement excoriating the incoming president, saying his election had "emboldened the forces of hate and bigotry in America":

We as a nation must find a way to move forward without consigning those who Trump has threatened to the shadows. Their fear is entirely rational, because Donald Trump has talked openly about doing terrible things to them. Every news piece that breathlessly obsesses over inauguration preparations compounds their fear by normalizing a man who has threatened to tear families apart, who has bragged about sexually assaulting women and who has directed crowds of thousands to intimidate reporters and assault African Americans. Their fear is legitimate and we must refuse to let it fall through the cracks between the fluff pieces.

Reid comes right out and says it in the statement ― a huge part of what he's trying to do is stop Trump from being "normalized," from all the pomp and ceremony of a new administration coming to Washington, D.C. making his candidacy and election somehow seem usual, unremarkable, or not that big a deal. Not, in other words, the often racist, sexist, and xenophobic maelstrom that it was.

Now, Reid has also fired back against the selection of former Breitbart chief Steve Bannon as Trump's senior strategist, citing allegations of anti-Semitism aired during Bannon's divorce proceedings, and how his website has catered to the so-called "alt-right," a sect of conservatism thick with racism and white nationalism. He made the case on the Senate floor:

Many of our fellow Americans believe that Trump's election validates a kind of bullying, aggressive behavior Trump modeled on a daily basis. How can we teach our children that bragging about sexual assault is abhorrent, if we rush into the arms of a man who dismissed it as "locker room talk"? If we fail to hold Trump accountable, we all bear major responsibility for normalizing his behavior.

By placing a champion of white supremacists a step away from the Oval Office, what message does Trump send to the young girl who woke up Wednesday morning in Rhode Island, afraid to be a woman of color in America? It's not a message of healing. If Trump is serious about seeking unity, the first thing he should do is rescind his appointment of Steve Bannon. Rescind it! Don't do it.

Reid will be retiring and leaving public life once his senate term expires, to be replaced by Democratic Senate newcomer Catherine Cortez Masto, the first Latina ever elected to the U.S. Senate. But the interesting question will be whether Reid intends to keep this up even while he's out of government, being a public thorn in Trump's side, and a forceful voice against the slow-slide of normalization.