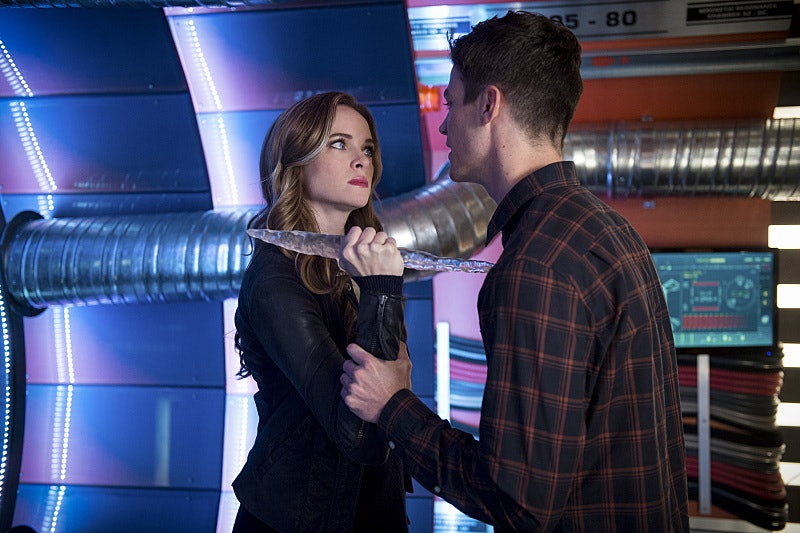 While Wally is taking a dangerous path towards becoming a hero on The Flash, Caitlin Snow is trying to avoid becoming a villain. Not all metahumans can have it as easy as Barry, Cisco, and even Jesse. Her powers have been manifesting exponentially, and now that Cisco saw Caitlin's Killer Frost future on The Flash , all bets are off. The chilly villain is not just an Earth-Two situation. She's coming to Central City and fast.

Next Tuesday's episode is titled "Killer Frost," so I guess this turn of events isn't too surprising. After going to her mom for help in the previous episode, Caitlin finally revealed her powers to Cisco and asked him to vibe into the future. She wanted to know if she was just going Elsa on everyone, or if her new metahuman status meant that he was going to be as evil as her Earth-Two dopplganger as well. Sure enough, Cisco vibed a future in which the two besties were facing off against one another. Caitlin was in full Killer Frost mode. For a second, I thought he was realizing that they were both going straight to the dark side — but that isn't how he interpreted it. He saw them as "meta-frienemies," so to speak.

How is Caitlin going to go evil? She's still a good person. Heck, she was a optometrist in Flashpoint. Professions don't come much kinder than that one. It probably doesn't help that Cisco almost immediately outed her as a metahuman in front of the team before she was ready. Whatever happens to Caitlin may not be forever, but it is happening now, and it's happening fast.

When The Flash first premiered and either research or a simple conversation with a DC fan told me that Caitlin Snow is based on a villain from the comics, I never would have expected that her story would be this complicated and layered. This is not your typical origin story by any means. Even the Dark Willow storyline on Buffy The Vampire Slayer, which this most closely resembles, is nothing like what Caitlin is going through. She's a reluctant villain, the way Barry and other characters across other stories are reluctant heroes. It's an interesting dynamic to play on The Flash and one that should further complicate the upcoming face-off with Alchemy.