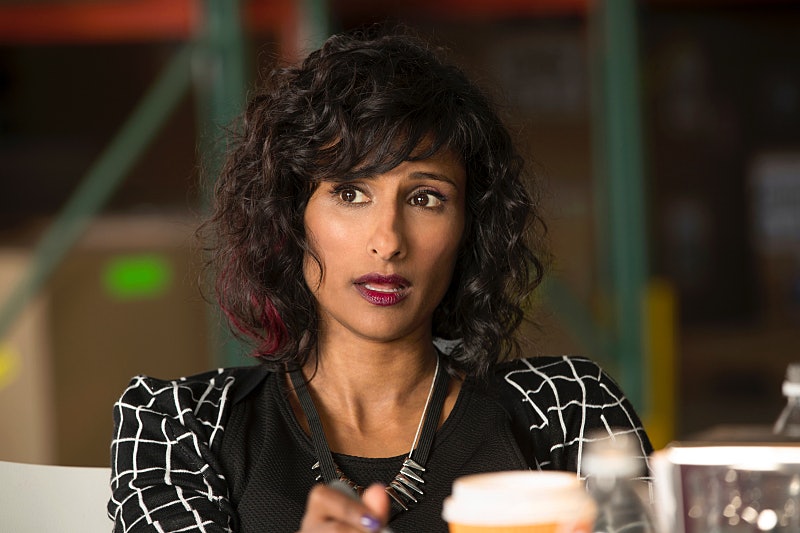 The plot continues to thicken in the most exciting ways on No Tomorrow , especially where Kareema is concerned. Far and away the most enigmatic character of the group (and that's saying something), Kareema was thrust into some very new territory that left her questioning herself in a big way: She developed a crush on tonight's epsiode of No Tomorrow. No, it wasn't any old crush. This one looks like it's going to be a defining moment for our fave sidekick. It would appear that Kareema is falling for her brother's fiancée, Sofia. This turn of events was big for Kareema, who up until now has been portrayed as a rather blunt but emotionally closed-off person. She's the wry one, the adventurous one (remember when she convinced Evie to try mud wrestling?), but we've never seen Kareema get all gooey around someone. That's where Sofia comes in.

Evie was able to bear witness to the budding romance first hand. After being invited along for moral support to Kareema's family dinner, Evie met her family for the first time. The intimate family gathering got even more intense when it became clear from the first moment they locked eyes that Sofia, Rohan's fiancée, and Kareema were low-key smitten with each other. This was unusual, to put it mildly. Considering the circumstances, it seemed totally illogical for Kareema to even get excited about liking her brother's fiancée. Despite Evie calling attention to the very obvious fact that Kareema was in serious like and that the two women had similar interests and good chemistry, Kareema knew this was dangerous territory.

Kareema's despair over her tricky situation began bubbling up at work. Evie suggested aversion therapy to help associate Sofia with something bad. She ended up giving Kareema a foul-smelling highlighter to help sniff her crush away. At this point, an interesting transition in Kareema has begun. While we've heard her discuss her sexuality before (it might be fair to say she's bisexual or pansexual), she has also expressed an vigorous aversion to traditional romantic gestures and dynamics. It's fair to say that a character as progressive and unique as Kareema is rare on television. As such, watching her weave her way through modern dating and romance is fascinating to watch.

Things hit a boiling point when Sofia and Kareema had a relaxing day at the spa. Sofia revealed that she and Rohan were simply good friends and that they were marrying so Sofia could get her green card. Kareema, relieved at not having to hide her feelings, kissed Sofia. The next day, after telling Rohan that she really like Sofia, she proceeded to give him a hard time about the green card marriage arrangement. It was at the point that Rohan revealed he was actually falling for Sofia. This, of course, is that last thing Kareema wanted to hear.

It was evident that Kareema was getting excited about being able to like Sofia. Knowing that she would have to juggle her feelings, possibly having to suppress them altogether, in favor of her brother's happiness was disheartening to watch. Kareema is entering into some choppy romantic waters with this unusual love triangle. Seeing how she will balance her own desires with her brother's may prove to be the toughest decision she has ever made.