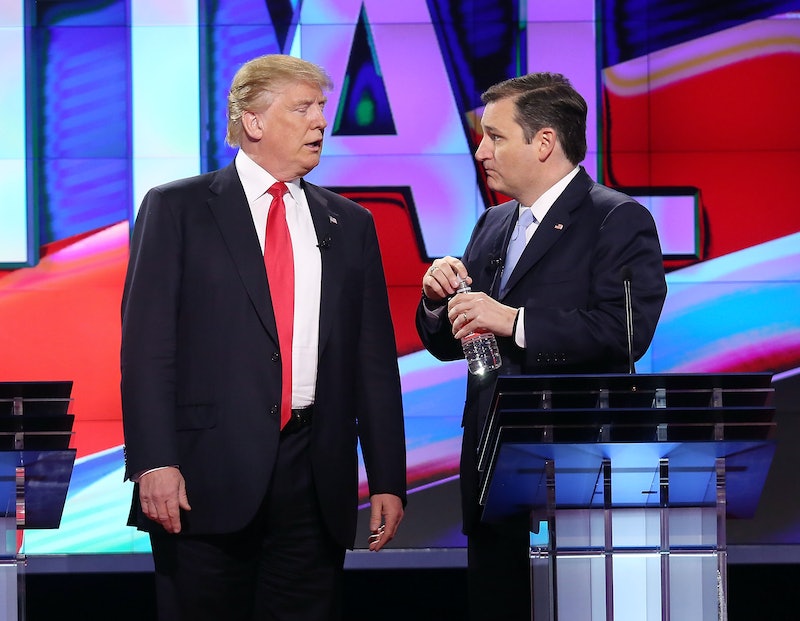 On Tuesday afternoon, Texas senator and former Republican candidate for president Ted Cruz met with Donald Trump at Trump Tower, sparking speculation that Cruz may become part of the Trump administration. While many Republicans who condemned Trump are calling to congratulate him, Cruz is so far the only congressional Republican to visit Trump in person, according to CNN. Details of their discussion weren't available, but Cruz's spokeswoman Catherine Frazier said he "looks forward to assisting the Trump administration."

Cruz is not the only former Trump rival to be considered for a role in the administration. Trump offered former GOP presidential candidate Ben Carson the position to lead the Department of Health and Human Services, which he declined via his spokesperson since he didn't feel qualified to run a federal agency, The New York Times reported. That same Times report describes the difficulty the transition team is having finding people to work in the administration.

If Cruz doesn't end up in the administration, there has been speculation that he would be tapped for the Supreme Court. Cruz claims he doesn't want to be on the Supreme Court, however, and instead plans to run for senate reelection in 2018. In late October, The Washington Post quoted him as saying the GOP may continue to block the vacant Supreme Court seat. "I think there will be plenty of time for debate on the issue." Cruz said. "There is certainly long historical precedent for a Supreme Court with fewer justices..."

Whatever Cruz decides to do, it will be a stark contrast from his former relationship with the president-elect. Trump and Cruz were bitter rivals in the campaign with Trump endlessly chastising him with name-calling throughout the campaign. When Cruz dropped out of the race, he didn't make the traditional endorsement of Trump at the Republican National Convention.

In October, Cruz started working on the Trump campaign, but he still had limits in his support. According to The Washington Post, he phone banked and called GOP voters without ever using Trump's name. In a recording captured by Dallas Morning News photographer G.J. McCarthy, he was heard saying, "I was calling to encourage you to come out and vote on Election Day. This election is critical for the direction of our country, and I urge you to come out to support freedom, the Constitution and the Bill of Rights." The image of him calling voters turned into an instant meme. If Cruz is offered a position in the Trump administration and accepts it, it's safe to say the two men have put the past behind them.