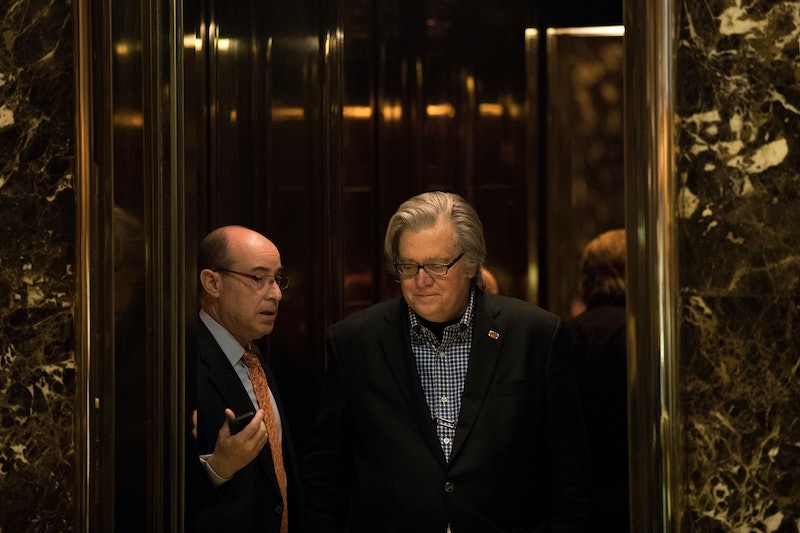 In the days since his electoral victory over Hillary Clinton, President-elect Donald Trump has made some moves to suggest that he's not as extreme as he once made himself out to be: He proposed keeping some parts of Obamacare, he promised to represent all Americans — and then he announced former Breitbart chairman Steve Bannon as his chief White House strategist. Simply put, Bannon — and the news site that he formerly ran — has a reputation for the offensive. If nothing else, consider some of the things that Bannon has said about women.

Bannon's appointment has angered many Americans, who worry about his reputation as the leader of a site like Breitbart, which has published such headlines as "Planned Parenthood's Body Count Under Cecile Richards Is Up To Half A Holocaust." While Trump's opponents, including President Obama, were recently calling him "unfit" to be president, some are now calling Bannon "unfit to advise" the future POTUS.

These arguments vary, but they tend to all stem from some variation of Bannon's past comments, which allegedly range from anti-Semitic to homophobic in nature. Not to mention, there are the things that he has said — or somehow endorsed — about women. Here are just a handful of those quotes.

These women cut to the heart of the progressive narrative. That's why there are some unintended consequences of the women's liberation movement. That, in fact, the women that would lead this country would be pro-family, they would have husbands, they would love their children. They wouldn't be a bunch of dykes that came from the Seven Sisters schools up in New England.

Bannon reportedly made this comment during a 2011 radio interview. In a way, it seems like he was giving credit to conservative women. But if he was, he did it at the expense of liberal men and women, not to mention members of the LGBTQ community.

Here, Bannon was reportedly referring to the "progressive narrative." Not surprisingly, this quote comes from the same radio interview as the one above, according to BuzzFeed. Apparently, Americans who complain about gender-based discrimination are playing the victim card, according to him.

According to Newsweek, Bannon has been involved in several lawsuits related to his treatment of women. Court documents obtained by The New York Post detail a claim by Julia Panely-Pacetti, a former employee that Bannon allegedly fired for having a disability and for being a woman in need of maternity leave. The lawsuit was filed in federal court in 2005 and settled privately in 2006. A spokeswoman for Bannon told the Post that Panely-Pacetti's termination was part of a department-wide layoff, denying claims that it was based on her sex.

According to BuzzFeed, Bannon was accused of sexual harassment by a female colleague in the 1990s. Bannon reportedly said "...a woman in a man's job..." to the plaintiff while referring to another female employee, in addition to reportedly making "lewd remarks," "disparaging remarks about females," and "sexually suggestive remarks." Bannon told BuzzFeed in a statement that the lawsuit was dropped, and he denied any wrongdoing at the time of the legal action.

Perhaps the most alarming of Bannon's comments toward women are the ones that he has allowed others to make. As the principal of Breitbart, Bannon undoubtedly had a lot to do with the content that the website published during his reign. He theoretically could have prevented or removed headlines like the one above and below, but he didn't.

The Solution To Online 'Harassment' Is Simple: Women Should Log Off

Each of the headlines listed here is attributed to Milo Yiannopoulos, who was banned from Twitter back in July for hateful comments he made on the social networking site toward actress Leslie Jones. In August, Vanity Fair reported that Bannon called Yiannopoulos' offensive-but-attention-grabbing activity "great."

There's No Hiring Bias Against Women In Tech, They Just Suck At Interviews

In the article with the above headline, Yiannopoulos also claimed that "women can usually land a job for no other reason than employer box-ticking." This chain of succession may be somewhat simplified, but it's essentially Yiannopoulos' former boss who will soon be advising the president of the United States.

For his part, Bannon has been brutally honest about Breitbart's point of view. "You don't come to us for warm and fuzzy," Bannon told The Washington Post. Meanwhile, Trump campaign manager Kellyanne Conway, who worked alongside Bannon while he was CEO of the campaign, has defended the new appointee, referring to his military service and his Harvard business degree as credentials. Chances are, Conway's endorsement won't be enough to sell Bannon through to the rest of American women.