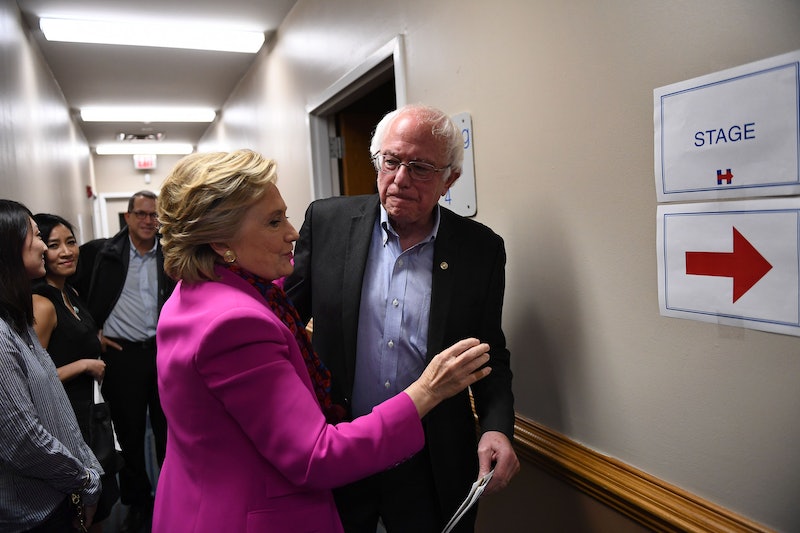 The internet these days is full of articles, tweets, and Facebook posts pointing to how Bernie Sanders would have won the election against Donald Trump. Sanders himself has said that he's "deeply humiliated" that Dems lost the white "working class" vote. So what's next for the Vermont senator? He lost the Democratic primary this time around, but 2020 is another chance. Could Bernie Sanders run for president again? There's no reason he couldn't, and he hasn't ruled it out. The bigger question, though, is whether he should.

Before we get to the implications of such a decision, let's get the practical out of the way. Sanders could, of course, run for president again. There's no law stopping anyone from running unless they've served two terms. He would be 79 years old in November 2020, making him the oldest president to ever take the White House after Trump, assuming he is sworn in this January at 70 (before Trump it was Ronald Reagan at 69). Besides that, he would just need to motivate his base and fight for the Democratic nomination — or he could run as an independent. Winning the Dem's nomination might be easier, but either way he could surely get on the ballot.

Sanders was definitely a thorn in Clinton's side this whole election. While he proposed some great policy ideas and successfully moved her to the left on issues, his candidacy gave left-wing Dems unhappy with the party's consensus candidate a place to channel their anger. Ultimately, it may have even led many not to vote or to vote third party.

We don't have data to say firmly one way or the other, but Kurt Eichenwald of Newsweek further articulated this suggestion about how the ultimate result of this election season came to pass. Dems who make "false equivalencies, always pretending that both nominees are the same, justifying their apathy and not voting" were the problem, he argued.

Eichenwald also attacked the idea that the system was rigged against Sanders, first off. It wasn't. If Sanders ran again next time, he would need to do a better job at reaching out to minority voters, who by and large were for Hillary. Even if he did that successfully, there's a fair chance he would lose the election — even to somebody as bad as Donald Trump. Take a look at the article if you don't believe me.

There was plenty the Republicans could have used to bring him down — far more than a private server full of really boring emails that if anything showed Clinton to be a real human, concerned about others and struggling with technology. Sanders, on the other hand, would have been attacked mercilessly by the Republicans, and they had plenty of ammunition from his time on unemployment and support of radical communists, to sending nuclear waste from Vermont to poor Latino communities in Texas. This stuff would not play well in a national race.

So sure, Sanders can run, but with so many other talented politicians out there, should he?

More like this
Michigan’s Governor Is “Going To Fight Like Hell” To Protect Abortion Access
By Andrea Zelinski
How To Fight For Reproductive Rights, Based On How Much Time You Have
By Courtney Young
LGBT+ Men Fleeing Afghanistan Were Denied Asylum By The Home Office, New Findings Show
By Sam Ramsden
The Kardashian Forerunners
By Mariah Smith
Get Even More From Bustle — Sign Up For The Newsletter