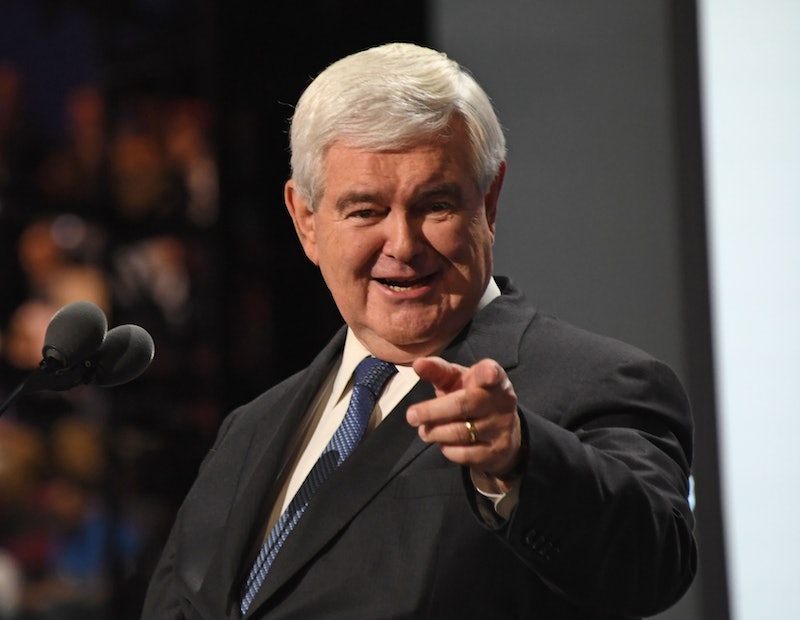 As Donald Trump heads to the White House, he will be tasked with filling thousands of government posts. Most crucial among them will be his Cabinet members, a small cohort of top government officials who will advise Trump and oversee everything from the Department of Defense to the Department of Education. In the running for one of these coveted spots is Newt Gingrich, an old political hand who served as the former Republican Speaker of the House during President Bill Clinton's second term. Gingrich has been a stalwart Trump ally, from the Republican primary right through Nov. 8, and some suspect he is banking on a thank you in the form of a Cabinet position.

But early signs indicate that loyalty alone will not guarantee a place at the President Trump table. Take, for instance, Chris Christie. On Nov. 9, Politico reported that Trump was planning on "rewarding" Christie for his service to the Trump campaign. And it is difficult to imagine why else Christie would have risked so much political capital back on Feb. 26; that was the day Christie announced his endorsement of Trump, the first "establishment" Republican to do so. The shock was so great that CNN described it as "an extraordinary day when the already wild 2016 presidential campaign turned into a political bloodbath," noting that several reporters present for the announcement "gasped" audibly.

Christie's endorsement came during a contested primary, when no one "respectable"looked ready to hitch their political car to the wild and offensive Trump train. So one might be forgiven for assuming that Christie would therefore be a shoe-in for a top Cabinet post. However, as of Nov. 15, Christie will not be receiving any special placement in the Trump administration. While Christie was initially in charge of Trump's transition team (the group responsible for making the move from private citizen to President Trump seamless), he was unceremoniously kicked out of that role, replaced now by Mike Pence. Many who were recommended for government positions by the New Jersey governor have been similarly dropped, the unmistakeable message being that "Christie allies" are not welcome here.

Gingrich is no stranger to advanced political maneuvering, so perhaps the former House Speaker will navigate the power plays in Trump's transition team with more luck than Christie. Gingrich led the impeachment hearings against President Clinton, the second time in American history a president had faced such charges. Like Andrew Johnson before him, Clinton was acquitted in the Senate, which means Gingrich's mission ultimately proved futile. But worth noting is the enormous political skill and will necessary to enact such an a-historic and risky venture.

What remains to be seen is if Trump wants someone that wily in his immediate vicinity. Early reports indicate Gingrich is being considered for Secretary of State, often considered the most prestigious of Cabinet assignments. But in that pool of contenders, Gingrich has a lot of company.

John Bolton is also a rumored choice for Secretary of State. Bolton was an ambassador to the United Nations under President George W. Bush, but his hawkish view on international engagement has already prompted Sen. Rand Paul to say, "I’ll do whatever it takes to stop someone like John Bolton being secretary of state." Paul leans Libertarian, holding isolationist views not too far removed from those of his father, Ron Paul. With a filibuster guaranteed, and from a member of his own party no less, Trump may choose to pass on Bolton.

Former governor of New York, Rudy Giuliani, is also said to be a Secretary of State possibility. (Sen. Paul is no fan of him, either.) Other names in the hat include Richard Armitage, Sen. Bob Corker, Richard Haass, Henry Paulson, and Sen. Jeff Sessions. Alert readers will recognize this list is comprised of solely white men, a problem acknowledged even by Trump's own team. Attracting women and minorities might be an ongoing problem for Trump's administration, given his uninhibited and divisive campaign rhetoric.

All these points may be moot, though, as Gingrich has reportedly said he "doesn't want" to be Secretary of State. He'd rather "investigate" various government agencies under a less official White House title. That probably won't quiet the qualms of Gingrich skeptics. If anything, holding a role with no accountability could give many more White House watchers a moment's (or four years') worth of worry.