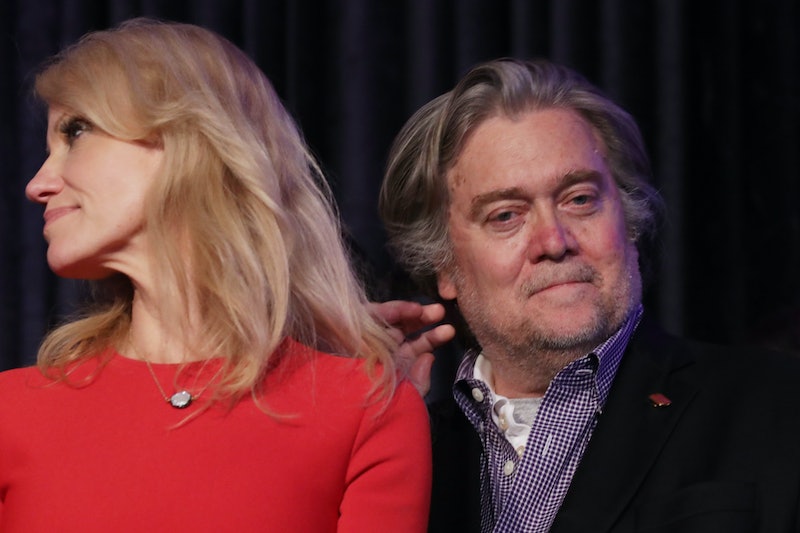 For months Steve Bannon was just sort of lurking in the wings of the Trump campaign, safely far enough so that society could pretend he wasn't there. That all ended when president-elect Donald Trump appointed him chief strategist and counsel to the president — a position elevated to the same level as chief of staff. The former Breitbart News president had joined the Trump team in August to take his website's anti-Hillary Clinton rhetoric to the American people. And, as you know, it worked. But these seven Bannon quotes on race show you that he has no business serving in the White House in any capacity.

Almost immediately Democrats began asking Trump to rescind the hire, and the outgoing Senate Minority Leader Harry Reid may have had the harshest language. He released a statement and expressed disdain from the Senate floor. Reid called him a "champion of racial division" and told Trump directly what he thought of the appointment: "I say to Donald Trump, take responsibility, rise to the dignity of the office — the president of the United States — instead of hiding behind your Twitter account, and show America that racism, bullying and bigotry have no place in the White House or America."

With quotes like these, it's easy to see why he feels that way.

1. Racist People In The Alt-Right

Bannon told Mother Jones that that are, in fact, racist people in the alt-right, it's just that he doesn't care so much:

2. Progressivism As Victimhood Of Race

Buzzfeed reported that in a 2011 radio interview Bannon told Political Vindication Radio that this is how he sees the progressive argument:

3. He's Not Keen On Immigrants Of Other Races

This was in an interview that Bannon had with Trump back in the early days of the campaign. Trump came off as the sane one suggesting that the best graduates of American universities get to stay and work after graduation. Bannon almost said something much worse.

Mother Jones again featured Bannon touching on the subject of race. He said his Alt-Right movement isn't "inherently" racist. He says it's "nationalist," but not "necessarily" white nationalist. He went on: "If you look at the identity movements over there in Europe, I think a lot of [them] are really 'Polish identity' or 'German identity,' not racial identity. It's more identity toward a nation-state or their people as a nation."

This one speaks for itself: "I do not believe we have a major race problem in this country. I just don't."

6. No Systemic Racism Either

Also from Karen Hunter's program on SiriusXM radio in July, Bannon denied systemic racism too. How? Well using his own life experience, of course:

Then he went on to localize that fun thing that white people say when they note that President Obama is black, as though that means everything is fixed: "Cities like Richmond and Baltimore and Philadelphia have black mayors, have black city councils, have black police commissioners. How can it be systemically racist if these men and women today are actually in control of the city?"

I think it's safe to say Reid, the Democrats, and the many level-headed Americans pushing for his ouster have a legitimate point to make.