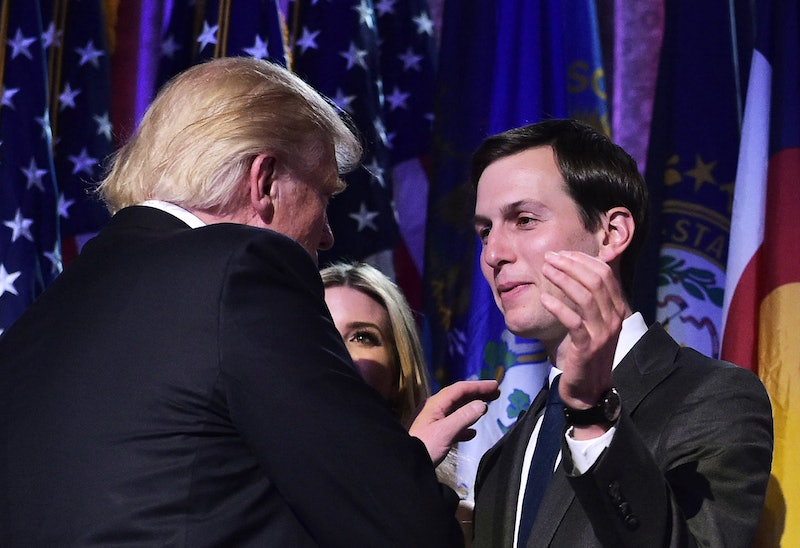 President-elect Donald Trump's three oldest children have played a large role in his campaign, speaking at the Republican National Convention, hitting the campaign trail, and attending the debates. But there's a son-in-law behind the scenes who has become an important adviser, too. That's Ivanka's husband, Jared Kushner. He is thought to have had one of the most influential roles in the Trump campaign, and it's not ending now that Trump is moving into the White House. So will Kushner be in Donald Trump's administration? The answer isn't clear, but either way he will have plenty of influence.

The Associated Press covered his continuing influential role Monday, noting that he was meeting with the Denis McDonough, Obama's chief of staff, while Trump was meeting with the president. Kushner was not formally part of Trump's campaign, and the AP reported that he is undecided on officially joining the administration. But he is officially part of the transition team — just like Trump's oldest children. So now the question is whether he gets an official title going forward; he is expected either way to be "an unparalleled power center in Trump’s orbit, with or without a West Wing office," as the AP's Julie Pace wrote.

Given the massive hiring that needs to happen by Jan. 20, Trump may need him officially. In the tour of the White House, Kushner asked an Obama aide how many people stay when Trump takes power. Almost everyone is going to be new, so they better start hiring ASAP. Kushner currently — at least officially — runs his family's real estate business, and he is new to politics just like Trump.

Given the appointment of Steve Bannon to the role of chief strategist, there might be an upside to Kushner getting more of a role. Kushner is an Orthodox Jew whose grandparents survived the Holocaust. He might be able to keep a lid on Bannon's anti-semitic views, or even pressure Trump to get rid of him. That will be easier with a security clearance, something Trump has requested for his children.

Still somewhat up in the air is the ethical implications of this decision. While unheard of, there is no rule stopping his children or son-in-law from serving on his transition team. That becomes more of a gray area when you're talking about the actual administration. The Washington Post did a run-down of what 5 U.S.C. 3110 says about hiring family members. Basically, you can't. But there are also ways that prohibition could be challenged with exceptions like declining to take a salary.

Keeping things simple might be the best route in the end, by having Kushner on hand as an unofficial adviser. It's worked so far; Trump won the Electoral College after all.