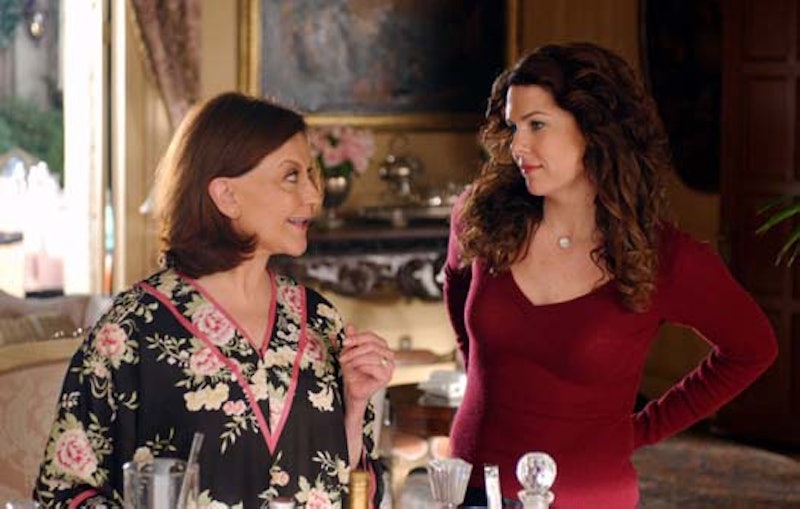 It wasn't until I re-watched Gilmore Girls as a 25-year-old that I realized that there was so much more to the show than who Rory was dating. For example, there were the deep seated issues between Rory's mother and grandmother. Which is why I was thrilled to hear that Lorelai and Emily are going to therapy in the Gilmore Girls revival. TV Line describes Lorelai and Emily's joint therapy sessions as "works of comedy art" and says that the scenes are comprised of them "passive aggressively working out their baggage." Which, you know, sounds totally on brand. But, while I'm glad it's funny and true to their characters, I'm more enthused that it's actually happening, in whatever way it needs to happen.

I watched Gilmore Girls the first time in real time. I was a scraggly little 9-year-old when the show premiered and a somewhat less scraggly but still painfully unaware 16-year-old when it ended. Naturally, most of the series' nuances went right over my curly haired head. For instance, while I understood that Lorelai and Emily had a somewhat antagonistic relationship, I didn't really look past the banter. I was way more like, "Hey, where's Jess?" whenever he wasn't in a scene.

So, while there's been a lot of online chatter about storylines remaining "unresolved" but I'd argue that this one about Lorelai and Emily — the tension, hurt, and lifelong resentment between mother and daughter — is the one that deserves the real resolution.

The relationship between Emily and Lorelai has always been stand offish and subliminal. Emily was devastated that Lorelai essentially "left" her, while Lorelai felt like a prisoner in her own home practically from birth. Add in a "shameful" teen pregnancy, and lost chance at an Ivy League education, and Lorelai became (or assumed herself) the black sheep of the family, despite being the only sheep that Richard and Emily had. While they eventually came to an understanding, that push and pull between the two lasted the entire series.

Lorelai best describes her relationship with her mother over Pop Tarts with Rory, an exchange that sheds light on the discord between Lorelai and Emily and just how early it started. Emily wanted total control, and Lorelai rebelled at every turn. Their relationship did get better as the series went on, but it was nowhere near mended.

For instance, whether they were both at odds and intent on misunderstanding each other, or one was willing to give in while the other one pulling away, the two were hardly ever on the same page.

But instead of constantly having knock down, drag out fights (though, there were a few), the two swept their very real issues under an expensive Persian rug. That tension manifested itself in other ways, through their aforementioned iconic bickering and pointed jabs. Sure, it's entertaining to watch, but it's certainly not healthy. The fact that Lorelai and Emily both have the wherewithal, maturity, and grace to attend therapy sessions in the revival shows a real growth and progression in both characters. And that is so important.

Why go to therapy now? Well, as Lauren Graham explained to Entertainment Weekly, the revival centers on Richard's death and what it means for the Gilmore girls. So, the fact that Richard, often the buffer between Lorelai and Emily, is now gone means that the two are left to finally deal with each other. Perhaps they do it not so much as a default reaction to his death, but in honor of him instead. Graham said to EW that Richard's death poses a question of "what's next?" for them, and maybe the answer, in Lorelai and Emily's case, is healing.