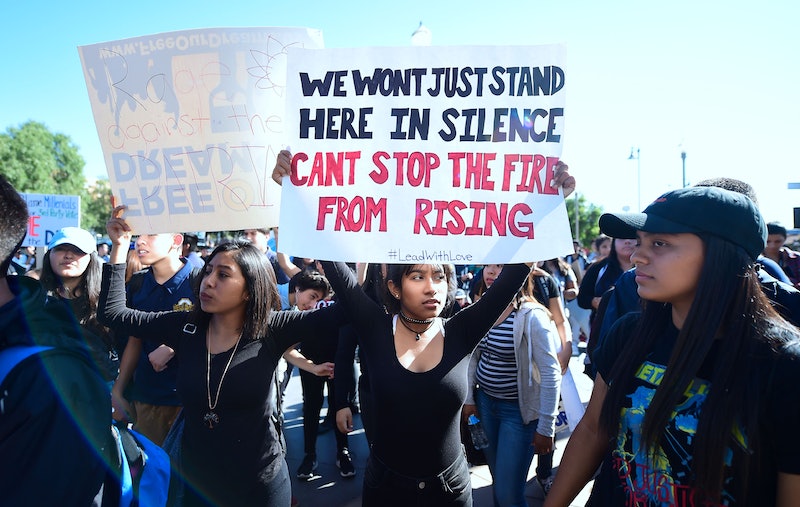 Protests that have broken out across the country following Donald Trump’s presidential win last week, and the conversation around them has been, at best despairing, and at worst brain-addling. The validity of the protests seems to be something that is up for debate even though, the last time I checked, president-elect Trump hadn’t done away with the right to free speech or the right to assemble. The problem with the protests isn’t that they’re protesting a foregone conclusion, or that they won’t prevent Trump from taking office — the problem is that the anti-Trump protests started too late.

Of course, we’ve seen protesters before in this election — in fact, some of the protests at Trump rallies turned violent — but much like the pendulum of the polls that seemed to swing between having Trump at a substantial deficit against Hillary Clinton to the two candidates being neck-and-neck, the protests against Trump and his campaign seemed to slacken as we approached election day. By my count, no major protests against Trump seemed to have occurred in the last two months of the campaign (granted, "major" is all in how you define it), and that lack of a spotlight might have contributed to Trump’s razor-thin victory in key swing states.

Trump is already chafing at the post-election protests in a way that gives new meaning to the term “hypocritical,” and considering that many of his supporters threatened much worse if he had lost, those protesting Trump should probably be commended for their restraint.

But if I can artificially set aside my rage and sadness and try and approach this moment dispassionately, it seems to me that one of the reasons the protests are so important is that they serve a dual purpose. On the one hand, they stridently assert Americans’ rights to assemble and to speak, which is a reminder we all need, especially considering we now have a commander-in-chief who likes to casually discuss curbing our First Amendment rights.

On the other hand, they seem to drive Trump effin’ nuts, and if there’s one thing we’ve learned from candidate Trump that can inform President Trump, it’s that he has a short fuse, and when he gets on the wrong side of a story, the public sees him for who he really is. That he happened to not be going after a federal judge with Mexican ancestry, or a Muslim gold star family, or a Venezuelan beauty pageant winner the week of the election may turn out to be one part unfortunate quirk of news and one part masterful handling of an unruly candidate.

What the protests have the power to do is to provoke the president-elect so that America is never again allowed to forget exactly who Trump is, even as he is enrobed in the regalia of state. It will not be a short battle, nor an easy one, but it is an important one, one which we as progressive Americans are required to pursue.