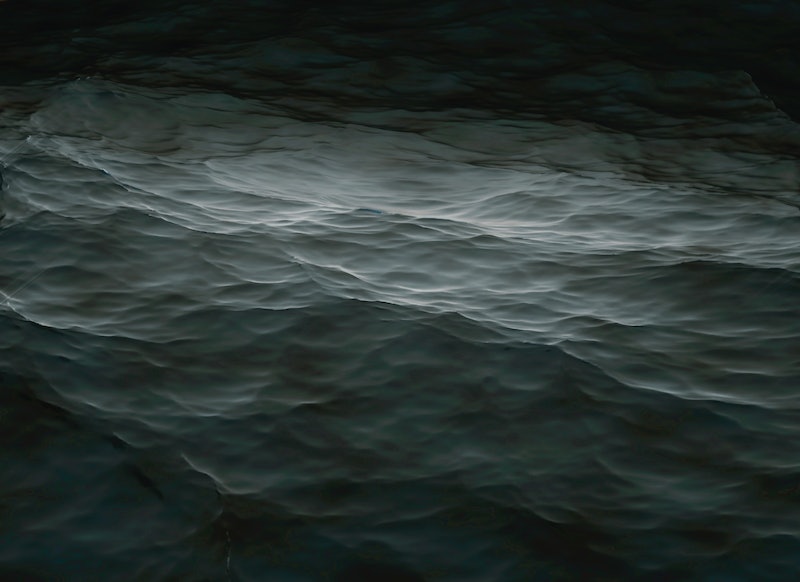 Halloween may be long since over, but you know what never goes out of style? Reading creepy stuff online over your lunch break and forgetting all about it until you catch a glimpse of your reflection in a darkened mirror just before bedtime, after which you give up all hope of sleeping ever again. If that's your idea of a good time, can I interest you in some creepy facts about the Bermuda Triangle? There's a reason the legend has stuck around for decades; something about the area's treacherous waters continues to capture imaginations worldwide — especially those belonging to conspiracy theorists.

Although it's well known these days, the Bermuda Triangle didn't actually get its name until 1964, when author Vincent Gaddis coined the term in an issue of Argosy. Also known as the Devil's Triangle — I never said the names were imaginative — it's roughly defined as the area of the Atlantic Ocean between Puerto Rico, Florida, and Bermuda. It may appear to be an average patch of ocean, but the Bermuda Triangle has been implicated in hundreds of disappearances throughout history. At least, that's according to legend; the high-profile disappearance that first grabbed the public's attention occurred in 1945, when an entire Navy squadron vanished into the air of the Bermuda Triangle.

Although it's possible that the Bermuda Triangle only seems more dangerous than other parts of the ocean because we're paying attention, its reputation is certainly sinister. Here are five creepy facts about the Bermuda Triangle that will make you grateful to be firmly planted on dry land.

It's perhaps the most famous Bermuda Triangle disappearance: In 1945, shortly after World War II, a squadron of five Navy torpedo bombers flew out of Ft. Lauderdale, Florida, to perform a routine training exercise. On their way back about two hours later, the squadron commander reported he was lost. Historians believe this is when he mistakenly directed his men further out to sea, where their signal grew fainter until it vanished entirely.

The planes presumably ran out of fuel and crashed into the ocean, but the wreckage of the planes has yet to be found. What elevates the incident into legend, though, is the disappearance of one of the PBM Mariner flying boats dispatched to rescue Flight 19 a few hours after they vanished. Between the 14 men comprising Flight 19 and the 13 men aboard the sea plane, 27 men were never seen again.

Another famous victim attributed to the Bermuda Triangle was the USS Cyclops, one of the Navy's largest fuel ships, in 1918. On March 4, it made a stop in the Caribbean on the way to Baltimore, Maryland, but it never finished the journey. Although no distress signal was ever sent, according to Time, more than 300 passengers and crew vanished along with the enormous ship. The remains were never found.

The Ocean Is Incredibly Deep

According to National Geographic, the ocean floor underneath the Bermuda Triangle is about 19,000 feet deep, and it folds into trenches as deep as 27,000 feet. Scientifically speaking, this could be why it's so hard to find the wreckage of ships and planes that crash into the area. Personally speaking, this is fuel for dozens of giant squid nightmares.

Last month, meteorologists speaking to the Science Channel show What on Earth? offered an uncomfortable possibility. According to Dr. Randy Cerveny, clouds above the Bermuda Triangle tend to form strange, hexagonal formations. These are formed by incredibly strong, sudden air currents that can reach up to 170 miles per hour. When these "air bombs" hit the ocean, they can create massive waves — the kind big enough to capsize ships. You can't tell me you don't find the thought terrifying.

Human Error Could Have Caused The Disappearances

Hear me out on this one. Sure, the idea of alien abductions, giant sea monsters, or portals to another dimension are pretty terrifying, but honestly, they're unlikely. Many scientific associations, including the National Ocean Service, attribute the high number of disappearances to a combination of bad weather and human error. To me, that's just as unnerving — hundreds of lives could have been saved but for human fallibility. Yikes.

More like this
8 Creepy Things You Probably Did In The '90s
By Julie Sprankles
How To See The Lunar Eclipse On May 15-16, 2022
By Kaitlyn Wylde
The 6 Best Air Conditioner Alternatives
By Vanessa Spilios
4 Zodiac Signs Least Affected By The May New Moon
By Brittany Beringer
Get Even More From Bustle — Sign Up For The Newsletter