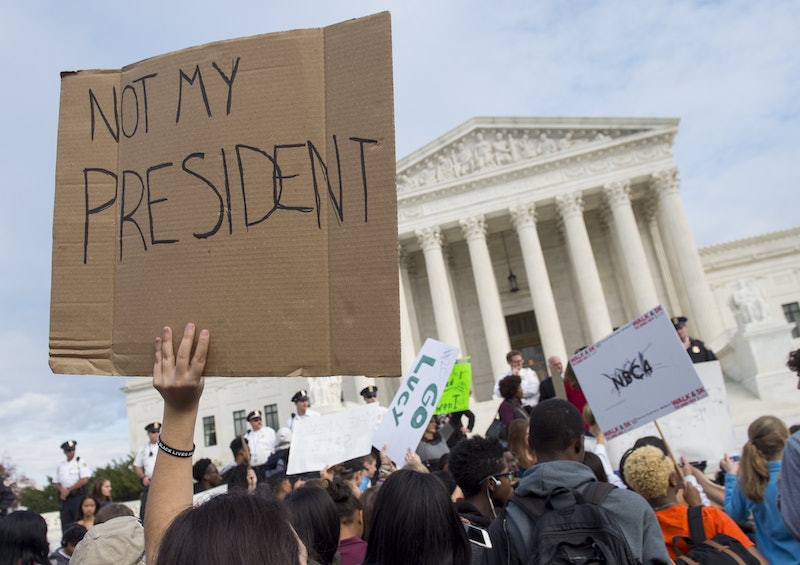 If the popular vote is any indication, more than half of the country is disappointed that Donald Trump will be the next president of the United States. And from the nation's legions of protestors to leaders within the Republican Party itself, many are looking for any way America and the rest of the world can avoid a Trump term. The possibility of Trump's impeachment has been up for debate since even before Election Day rolled around. But how could such an event even begin to take place?

There are a number of online petitions calling for Trump's impeachment, but none of them will likely have any effect on whether he stays president or not. If Trump's campaign behavior is any indication, he could very well do, say, or tweet something to cause his popularity to plummet nationwide. But until the House of Representatives determines he has committed "treason, bribery, or other high crimes and misdemeanors," the process to impeach him can't begin.

As of now, Trump's best bet for getting impeached would be getting convicted in one of his 75 current lawsuits. (No telling how many of the lawsuits he threatened during his campaign he will actually be going through with.) The most high-profile of these cases, Low v. Trump University, is set to begin in San Diego federal court at the end of the month. Trump University, of which Trump was a principal owner, is accused of defrauding its former students out of millions of dollars. Reuter's reports that Trump's lawyers are trying to delay the trial until after Inauguration Day on Jan. 20.

Opinions differ as to how likely impeachment could be. Jeet Heer of The New Republic says Trump impeachment fantasies are just that: fantasies. He cites the upcoming commander-in-chief's consolidation of GOP support. On the other hand, CNN reports that American University professor Allan Lichtman, who has correctly predicted every presidential election over the past 22 years, says that Trump's impeachment stands a very good chance of happening because Republican leaders would much prefer to have Mike Pence in power.

With those two expert opinions in mind, the question still stands of how much good impeachment would do. First of all, impeachment doesn't necessarily mean Trump would be removed from the presidency. Clinton was impeached in 1998 and acquitted the following year, thus getting to serve the entirety of his second term. Secondly, even if Trump is impeached by the majority-Republican House of Representatives, there is still the chance that he could later be acquitted by the majority-Republican Senate. Lastly, if Trump is removed from office, the U.S. is still stuck with Pence -- who, from some perspectives, is just as bad as (if not worse than) Trump.

Even if impeachment is in the cards for the president-elect, it's not a solution to the problems that put him in the presidency in the first place, or the problems that would come after. Speculation and debate on this subject will likely continue for the entirety of the next four years, but really it is just one of many questions that plague us now that Trump will be president.