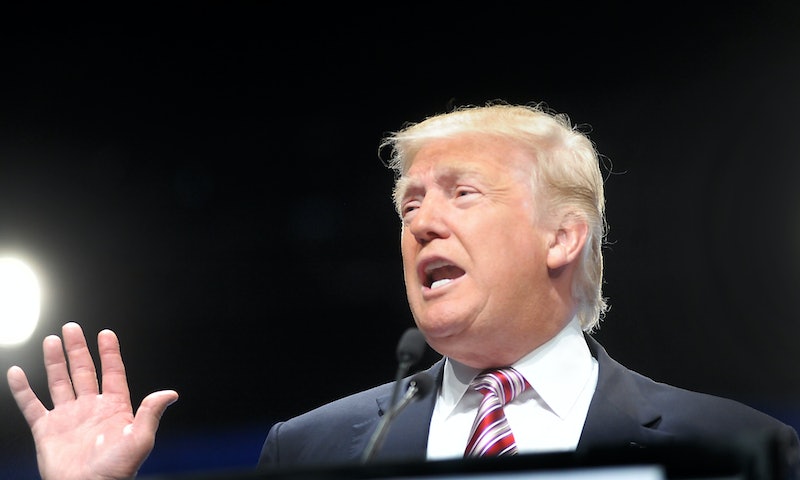 Throughout his campaign for the White House, Donald Trump vowed to repeal Obamacare. But like a lot of his promises, he's already backpedaling, at least partially. Since becoming president-elect, Trump has sent confusing mixed messages on what he is actually going to do with Obamacare and health insurance reform. So what is the likelihood Trump will take away your insurance?

On the campaign trail, and on his website (still), Trump adamantly promised that he will "completely repeal Obamacare." (That is actually what is stated on his campaign website in his healthcare reform section.) This policy overhaul would potentially threaten the health insurance of over 20 million Americans, according to a study by the nonpartisan Commonwealth Fund.

But in an interview with The Wall Street Journal, Trump dramatically adjusted that promise, saying, "Either Obamacare will be amended, or repealed and replaced." It's important to point out that amending legislation is very common, and laws are living documents, often being tweaked and improved over time. To be so unclear about whether he would repeal or amend, and what exactly amending what entail, is unfair to the people who voted for Trump because he promised a repeal/replacement. At the same time, I can't help but feel personally relieved that Trump may not intend to completely scrap Obamacare.

Here's where Trump gets the most hypocritical and perilously confusing. The two of the most famous attributes of the Affordable Care Act (the official name of Obamacare) are: 1) that you can stay on your parent's insurance until you're 26 (a part that's especially important to millennials), and 2) how it protects people who are sick or have been sick from being taken advantage of by insurance companies which would deny them coverage if they have preexisting conditions. In a CBS 60 Minutes interview with Leslie Stahl that aired Sunday, Trump said that he would keep those two things in whatever plan he ends up proposing (which, horrifyingly, is still unclear!). Here's how the exchange with Stahl went:

Donald Trump: Also, with the children living with their parents for an extended period, we’re

Donald Trump: Very much try and keep that. Adds cost, but it’s very much something we’re

going to try and keep.

You can watch the whole interview here:

It's highly unclear what exactly the president-elect plans in terms of healthcare reform. Until we know what he has in mind, it's hard, if not impossible, to assess who will retain their health insurance and who will lose theirs under his presidency.

More like this
Michigan’s Governor Is “Going To Fight Like Hell” To Protect Abortion Access
By Andrea Zelinski
How To Fight For Reproductive Rights, Based On How Much Time You Have
By Courtney Young
Chelsea Woody On Shattering Stereotypes In Surfing
By Leah Groth
'Heartstopper’s Joe Locke Is Manifesting A Jennifer Coolidge Cameo Next
By Nola Ojomu
Get Even More From Bustle — Sign Up For The Newsletter