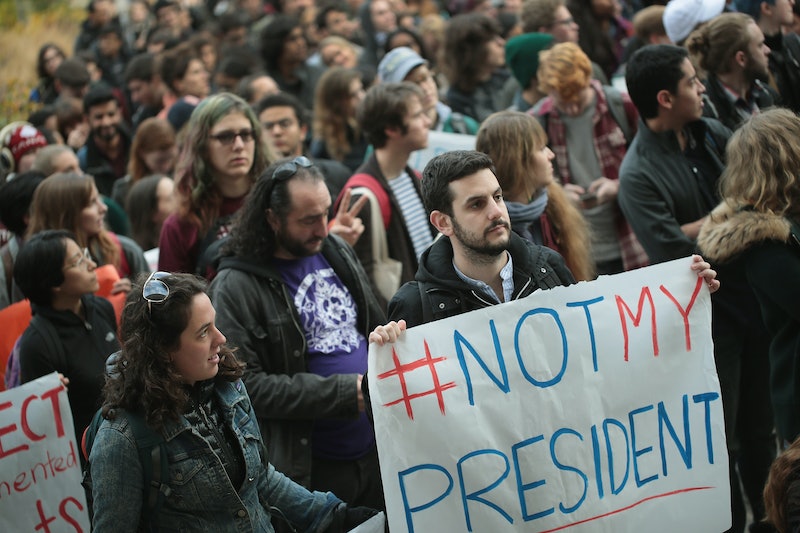 According to Iowa Republican Rep. Bobby Kaufmann, being upset is only okay when he does it. The state representative's feelings were so hurt by student protests over the last week that he announced plans to introduce a "suck it up, buttercup" bill in order to punish people for expressing grief or outrage about the Electoral College victory of Donald Trump. Kaufmann told The Des Moines Register that he plans to introduce the "suck it up" bill when the state legislature reconvenes in January. The bill would seek to create new criminal penalties for protests and target state universities that provided resources for their students after Election Day, apparently because Kaufmann disapproves of these specific protests.

"You can't exercise your constitutional right by trampling on someone else's," Kaufmann told The Des Moines Register, apparently with no sense of irony about the fact that his proposed bill would trample on Iowans' First Amendment right to protest. So protesting is okay with Kaufmann, but only as long as it's done in ways he feels comfortable with? Doesn't that sound like the kind of coddling he's criticizing other Millennials for seeking out at college?

I realize it's become increasingly common to criticize Millennials over their supposed sensitivity, but being seriously upset by the results of a presidential election — an enormously significant event that will impact the lives of all Americans for years to come — is a far cry from day-to-day disappointment. Older generations, on the other hand, have rioted simply because their favorite sports teams lost. It's hardly a sign of weakness or disconnect from the real world to care about the president.

In an interview with Fox News' Pete Hegseth, Kaufmann attempted to frame his concerns as financial:

I was hearing reports of rooms where you could play with Play-Doh, and you could color books and talk about your feelings ... For me, that's a waste of taxpayer dollars, and that also doesn't prepare kids for life, because in life, there's winners and losers.

How much does Kaufmann think Play-Doh and coloring books cost? The real waste of taxpayer dollars is the time Kaufmann spends promoting this bill and himself instead of addressing other issues relevant to his constituents.

Moreover, Kaufmann is getting his own feelings hurt pretty easily for someone who introduced a bill telling students and protesters to "suck it up." When he convened an investigation into a conference for LGBT youth earlier this year, as reported by The Advocate, he appeared visibly upset over rumors that he an another anti-gay representative were actually a couple. “I am getting sick of reading all the crap that is on the blogs,” Kaufmann fumed before the Iowa House Committee.

I find it deeply hypocritical that Kaufmann can react so sensitively to criticism of his work while condemning protesters and students for being upset about the election of a man who has threatened religious liberty, bragged about grabbing women without their consent, and attacked a Gold Star family. If protesting those things hurts Kaufmann's feelings, I guess protesters better find something else to do. One idea? He's up for reelection in 2018.