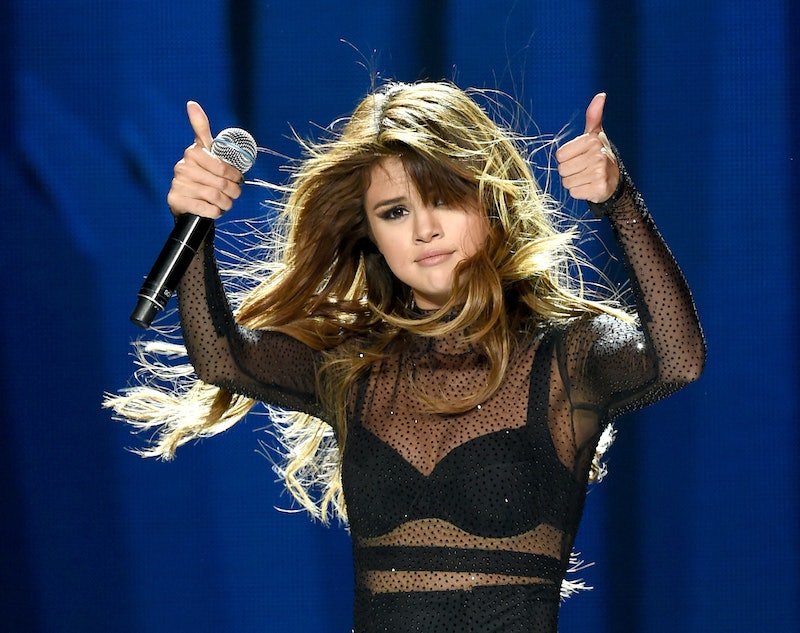 The 2016 American Music Awards are coming up on Nov. 20, and while it's a night for every big name in the business to celebrate, some fan favorites are out on tour or taking a break from the spotlight. Back in August, Selena Gomez announced that she was taking a break from her career to deal with depression and anxiety resulting from her lupus. She has remained successfully out of the spotlight since then, but with all her exciting nominations this year, will Gomez be at the 2016 AMAs?

While my first inclination would be to assume that she would not attend, E! News reports that Gomez might be at the award ceremony on Sunday night. The show's producer, Larry Klein, shared the possibility with E! News while an additional source claimed that it's definite. If she is planning to appear, this is great news for fans who have anxiously been waiting for her return.

During her break from the spotlight, it was reported that Gomez went to a rehabilitation facility in Tennessee to help with her health issues. (Bustle reached out to Gomez's rep regarding these reports at the time, but did not receive a response.) Being that Gomez has hardly been seen at all and no reports have come out about her returning to work, I thought that Gomez would not be at the AMAs and would probably continue to take time to take care of herself. That said, she did resurface at a Texas Roadhouse in Tennessee, where she took photos with some fans and employees:

Her fans were so excited to catch a glimpse of her, that they naturally started a hashtag party with #SelenaIsBackParty, but the fun was short-lived as she continued living her life privately.

Last year, Gomez performed "Same Old Love" at the 2015 AMAs, and she has been a staple of the award show for many years. If she is ready to make a high-profile appearance, attending the AMAs would allow her to celebrate her nominations for Artist of the Year and Favorite Female Artist: Pop/Rock in person. Whatever Gomez decides I trust that her fans will support her.