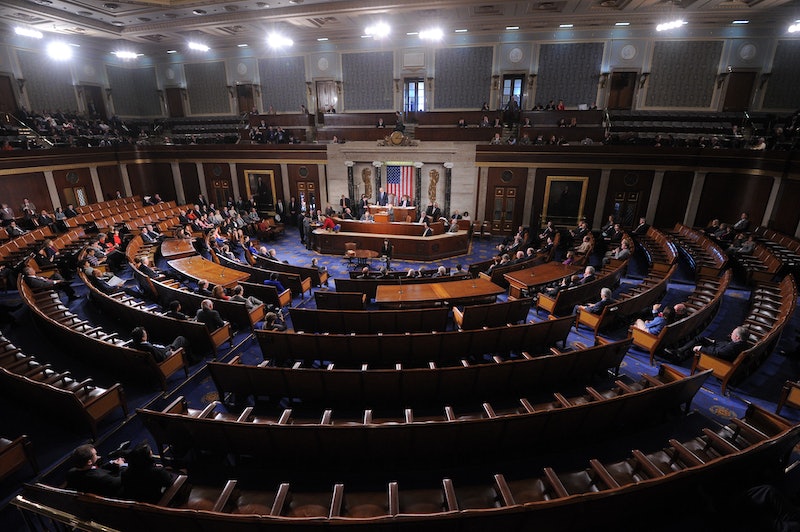 If you've been following politics in the United States, you're most likely aware that while Hillary Clinton won the popular vote, Donald Trump won the electoral vote, and thus the presidency. But since the Electoral College hasn't voted yet, some voters have an alternate plan; paying the fines of electors who switch their votes. This is the second time since the 2000 election that the winner of the popular vote wasn't actually elected, and the fifth time in the United States overall. Despite Trump having been declared the president-elect, more than 4.3 million people have signed a petition urging Republican electors to cast their votes for Clinton — including singers Lady Gaga and Pink.

The U.S. Constitution doesn't actually specify how electors are chosen, nor does it have any punitive measures in place for electors who vote contrary to the popular vote in their states. The District of Columbia and 29 states do have some laws in place attempting to bind electors' votes, but to this day no faithless elector has actually been punished. Faithless electors would most likely face a misdemeanor and a $1,000 fine, according to FairVote, and there don't seem to be any laws prohibiting others from raising funds to pay these fees.

Strangely enough, despite 2012 tweets in which Trump decried the Electoral College, the president-elect is now speaking up for the American electoral system. On Nov. 15, he called it "actually genius" despite his 2012 claim that "The electoral college is a disaster for democracy." Still, retiring California Sen. Barbara Boxer has introduced a bill to abolish the Electoral College. According to CBS Los Angeles, the bill is extremely unlikely to pass before electors cast their votes, and it would only take effect if Congress passes it and then three-fourths of states ratify it within seven years of it being passed.

But even if the system isn't abolished, can electors be persuaded to vote faithlessly? No faithless elector thus far has actually managed to change the results of a presidential election. Additionally, Trump's strong lead in the Electoral College, with 290 votes to Clinton's 232, would make convincing enough Republican electors to vote for Clinton difficult.

A "surprisingly large" number of electors think about changing their votes, according to a CNN opinion piece by Robert M. Alexander, an Ohio Northern University political science professor. One out of five Republican electors in 2008 considered defecting, according to data collected by Alexander. But their reason for considering faithlessly voting had little to do with preferring the Democratic candidate; the main reason to vote faithlessly is disliking their own party's nominee. Some Republican electors may not cast their ballots for Trump this time around, Alexander predicted, but instead of voting for Clinton, they would most likely symbolically vote for another Republican, such as Vice President-elect Mike Pence.

While faithless electors would likely not face very severe charges for changing their votes, it seems unlikely that Clinton would be elected instead of Trump.