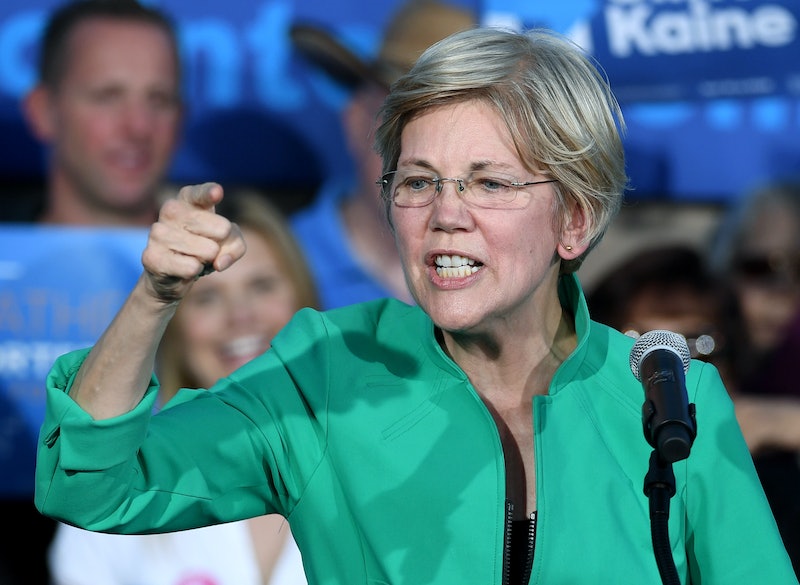 During his campaign, Donald Trump decried including special interests and lobbyists in politics, and one Democrat wants to make sure he keeps his campaign promises on that front once he's in office. Massachusetts Sen. Elizabeth Warren wrote a letter to Trump, and she's not playing around.

In a speech at the Wall Street Journal's CEO Council conference in Washington, D.C., on Nov. 15, Warren told the audience, "What Donald Trump is doing is that he's putting together a transition team that's full of lobbyists — the kind of people he actually ran against," The Huffington Post reported. That same day, she published her letter to Trump online, urging him to remove the "lobbyists and financial bigwigs" from his transition team. And she called 22 of them out by name — and special interest.

"You promised that you would 'not be controlled by the donors, special interests and lobbyists who have corrupted our politics and politicians for far too long,' and that you would 'drain the swamp' in Washington D.C. And you won election largely on the strength of these promises," Warren wrote. "The American people are watching to see if you were sincere in your campaign promises to look out for the interests of working families, rather than the interests of the rich and powerful. Now it is time to live up to those promises. Unfortunately, you already appear to be failing."

If you thought that part was powerful on its own, check out what Warren plans to do if Trump doesn't replace the special interests on his transition team. "Should you refuse," she wrote, "I will oppose you, every step of the way, for the next four years. I will champion the millions of Americans you will fail to protect. I will track your every move, and I will remind Americans, every day, of the actions you take that fail them. And I will not be the only one watching. The millions of Americans who voted for you - and the millions who didn't — will all be watching you." If I were Trump, I would be taking Warren very seriously at this point.

Trump has a history of saying he didn't say things that he was actually documented saying, making the likelihood that he would dismiss at least a few of Warren's claims in the letter decently high. So, probably in an attempt to remove the possibility of Trump denouncing her claims as false, Warren cited pretty much every claim in her letter. With its hefty footnotes, Warren's letter could pass as a research paper, if it wasn't for Warren's use of the second-person point of view. Well, actually it could pass as a research paper if Warren hadn't blasted Trump for his actions throughout the letter. Somehow, "I would be more than happy to provide you with a list of qualified advisers and potential nominees," doesn't come off as friendly as much as it comes off as a warning once you read the whole thing.

Hopefully Warren's letter helps Trump realize that rather than catering to special interests and people who campaigned for him, he should be looking out for the interests of the general public. And maybe Trump could start by not hiring a white nationalist as his chief strategist. Just a suggestion.