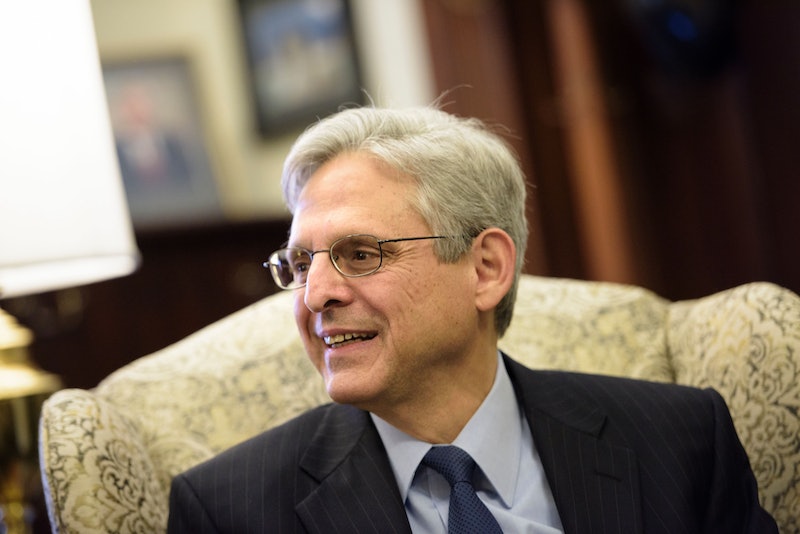 Now that Donald Trump has won the presidential election, there's no doubt that some Republicans are patting themselves on the back now that they have hijacked the Supreme Court to their benefit over the last year. Senate Majority Leader Mitch McConnell has been called to reconsider by many, including The Los Angeles Times, to protect the integrity of the court and the Senate. But it seems to no avail — they are stonewalling until President-elect Trump can name someone more conservative. But there's another route this story could take. Will Obama make a recess appointment? He could put Garland on the court — but he won't.

First off, let's a take a look at how that would even work. It's been eight months since Garland was first nominated, so it's time to consider options, and there are a few different paths the president could take. One would result in a permanent appointment — although it's quite a stretch, legally. The other would get Garland on the court for at least the first year of the Trump Administration, which could be helpful if he goes forward with his deportation and Muslim registry plans that his transition team is considering. But it would still give Trump the ability to name the permanent replacement.

The first, permanent, one is quite the long shot. It was put forward by attorney Gregory Diskant in a Washington Post op-ed. He argued that the Senate had shirked its constitutional duty to vote yes or no on Garland, and thus Obama must move forward with his duty to appoint Garland. That's been doubted by many. The other route, as put forward by David Dayen in The New Republic, is that Obama can make a recess appointment between the outgoing and incoming senates. It would last until December 2017, at least. Sounds better than an immediate Trump appointment, right? But that won't be Obama's next move. That's not how he's played it for nearly eight years. The Republicans have caused government shutdowns, debt ceiling spats, and more. Keeping Garland from the bench is just the latest Republican obstructionism.

And all the while, Obama has taken the high road, negotiated, and given up room to the Republican extremists holding the government and country hostage. There's no reason to think he will change his usual response now just because they have taken things as far as who controls the Supreme Court. When they go low like this, Obama, as Michelle has said, goes high. Whether that's worth a conservative Supreme Court for decades to come is another question, but don't expect Obama to waver.