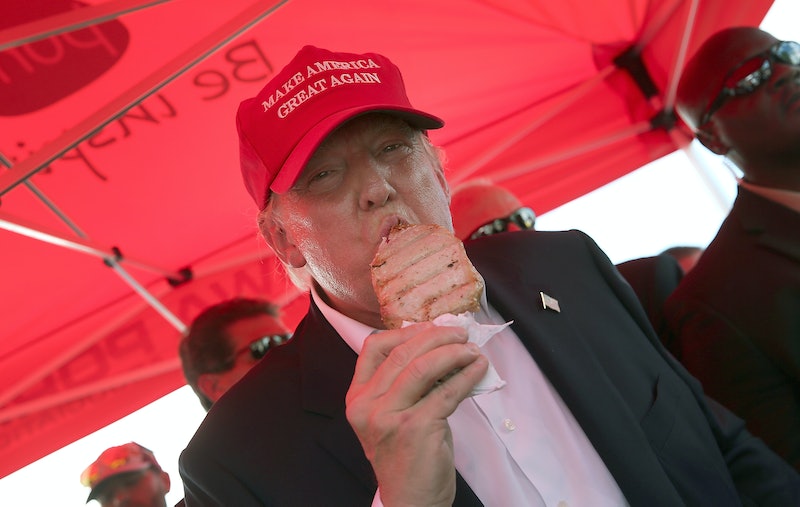 Look, I know how you've been spending your time since the election. In the bottom of a bottle, eating ice cream, and watching cute videos of animals on the internet. Animals are innocent! Corgis only want to wear silly costumes and play on the beach! They'll save us from thinking about our rotten 2016, right? Right?! Well, not so fast. The problems with President-elect Donald Trump extend to animal rights and protections, both in the U.S. and worldwide. And that should be enough to get you angry.

Maybe you (somehow) don't care about that reported Muslim registry, or the 12 assorted sexual assault cases pending against him, or the likely defunding of Planned Parenthood, or the fact that a dude who compared feminism unfavorably to cancer has a direct line to Trump's office. Maybe those just don't get you angry; but harm to animals, surely, has to be a thing to touch your cold heart, and move you to protest and get anxious about the fate of the country. Do it for the puppies, and the protected species, and the biodiversity of protected land, and the leopards that will likely be hunted by the Trumps Junior, plural.

Animal activists of any stripe will be seriously haunted and upset by what will happen, under a Trump administration, to the wildlife of America and the world, through lack of action on climate change, environmentally destructive economic policies, and other matters of intense misery for hapless animals who happen to get in the Trump administration's way.

The Humane Society didn't hold back when it declared that Trump would be "a threat to animals everywhere." And a lot of its opinion on the matter was based on the people who have showed up as advisors to Trump on the campaign trail. The governors and senators used to bolster Trump's credentials, who may now be given positions in the Cabinet and as staffers, were an interesting bunch, and the ones singled out by the Humane Society were often opposed to measures designed to weed out animal cruelty in meat production, farming, and the pet industry.

Among the more interesting were Terry Branstad and Annette Sweeney, Iowa politicians who helped sign a bill about preventing filming of animal abuse and other problems on agricultural sites into law, and Brian Munzlinger, who was one of the agents behind Missouri's proposed laws on relaxing regulations about puppy mills. Vice President-elect Mike Pence has a slightly better record, but not by much. Even though he voted for strengthening the punishment for animal fighting, he also voted against free-roaming horse populations, wanted to de-authorize "critical habitat" designations for endangered species, and wanted forest thinning projects to speed up.

What To Do: Protest appointments of anti-environmental and animal politicians to Trump's cabinet by calling your congressional representatives.

Considering that we're having a lot of discussion currently about whether or not The Donald's adult sons Donald Jr. and Eric should be allowed to have positions in his White House (the law says no, by the way), it may be worth reminding you that Donald Jr. and Eric have a lovely tendency to travel to Africa to kill elephants and leopards for fun. Trump himself, when photos of their latest jaunt came out in 2012, said that he himself didn't like hunting and couldn't understand the fascination — but his sons will be in the spotlight now more than ever nonetheless, glorifying the act of hunting wildlife among Trump's gun-toting base.

What To Do: Donate to the Humane Society, which has extensive campaigning against trophy hunting and abuses of hunting law across the United States.

He Wants To Expand Oil Drilling On National Land

It's not exactly a good thing for America's wild species when a president-elect demands that exploration for oil and fossil fuels be allowed on the nation's public lands. President Obama, as National Geographic explains, attempted to protect as much of America's wilderness from encroachment by industry as possible through law, but Trump's administration will likely try to overturn that or circumvent it. Federal land has been protected from oil drilling throughout the Obama administration, for instance, while Trump would like to reinstate it. The associated habitat destruction could be severe; the WWF calls oil and gas development, and its associated infrastructure, one of the greatest threats to wildlife habitats around the world.

What To Do: Join active protests against specific drilling projects as they're announced, and fund and support organizations and lobbying groups that work to protect national lands, like the National Wildlife Federation.

His EPA Pick Doesn't Even Believe In Climate Change

Cripes alive, where do I even start. If you can't see the link between a White House that flat-out doesn't believe in climate change and a devastating impact on the wildlife of America and the world in general, let me spell it out for you. Myron Ebell, who's been Trump's pick for head of the Environmental Protection Agency, genuinely believes that climate change is "phony" and "could have benefits" if true.

For a good explanation of why this is catastrophic, let's turn to the children's section of the EPA's current website, which highlights two of the main threats to species through climate change: the narrowing or disappearance of habitats, and the eradication of coral reefs, both of which are already placing serious pressure on the survival of species worldwide. And it's not just about dying polar bears — a new study released in Nature has judged that the impacts of climate change are also inherent in species themselves, from shifting migration patterns to new spawning times to desperate changes of habitat in search of food.

Oh, and as if all that weren't enough, Trump has also said he wants the United States to pull out of the Paris climate agreement, which took years to form, and aims to combat global warming.

What To Do: Protests against Ebell's appointments are already taking place. If you'd rather not take a political route, donate to organizations devoted to fighting climate change like Cool Earth.

It looks as if Trump's position on the Endangered Species Act is going to be a fiddly one. According to LiveScience, he said that laws protecting species within the U.S. would be "modified to balance the needs of society with the preservation of our valuable living resources." What this means in practice is not entirely clear, but it's been suggested that certain populations will be taken off the endangered list on a state-by-state basis if keeping them alive would harm the state's economic success, threatening crops, or creating other issues. How this actually shakes out, as with most aspects of Trump's mandate, is anybody's guess, but it's not likely to be good news.

What To Do: Monitor the situation, and in the meantime give time and money to specific groups fighting to save endangered species in America, from the Defenders Of Wildlife to Sea Shepherd.

It's going to be a long four years — so don't forget to do what you can to be a voice for the voiceless.