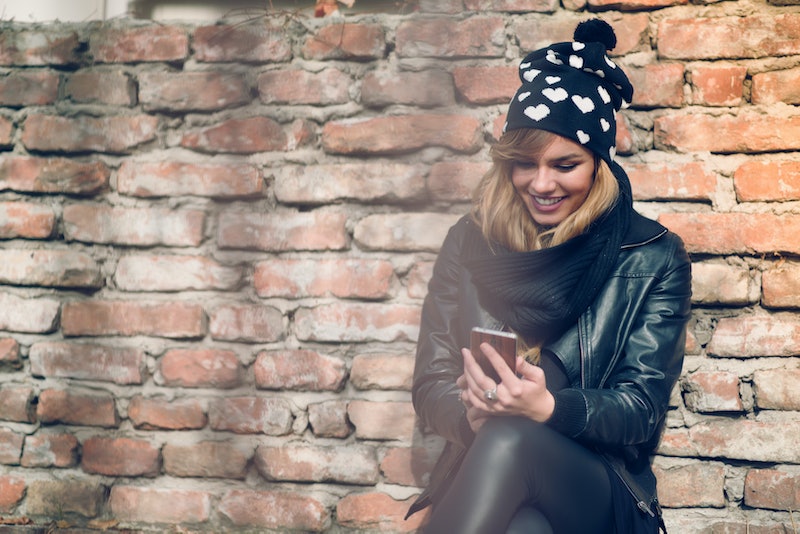 If you're heading home for the Thanksgiving, it may actually be the perfect time to get on Tinder. A lot of us like to do some voyeuristic Tinder-ing when we're home to see who from high school is kicking around and what they're up to now. That guy you like in high school but the timing was always wrong? The girl who's suddenly become your type? Going home for the holidays can totally mean getting those old flings out of your system.

"Hometowns and cities tend to be places where most people know each other's friends and families, so finding a date is likely the objective for Tinder users during the Thanksgiving holiday," Tinder Sociologist Dr. Jess Carbino tells Bustle. "I would recommend that those are thinking about reconnecting with old flames keep an open mind. Naturally, we all change in different ways overtime so when potentially giving someone a second chance, think of it as a first impression. And if you're seeing a true blast from the past – an ex – remember that the past is the past for a reason."

Want to get a head start on your Thanksgiving swiping? You can use the Passport function to swipe anywhere, so you can start your hometown swiping whenever you want. Here's where they found the largest increases over Thanksgiving weekend:

Detroit was the largest, with a whopping 54 percent more swiping over the holiday weekend on average.

People in Texas like to go big, especially on Thanksgiving, apparently. They had 43 percent more swipes than normal.

Our capitol is a swiping hotbed, with a 41 percent increase.

Another Texan city in the top , this one with a 38 percent increase. They take their swiping seriously down south.

With over a third— 37 percent— more swiping than usual, if you're from Maryland you might want to log on.

Heading home to Philly? You have a 34 more chance of a match than usual.

The city of swipes and dream. Enjoy the balmy temperatures and a 32 percent increase in Thanksgiving swipes.

Thirty-two percent might be the lucky number, with Charlotte also seeing that increase.

Finally, Portland rounded out the top 10. They had a 30 percent shift from a normal weekend.

Your city didn't make the list? Don't worry, there are still plenty of swiping opportunities. Remember, there was a 23 percent jump country-wide last year, so your chances of a match are sky high. Plus, don't you just want to have a look around?