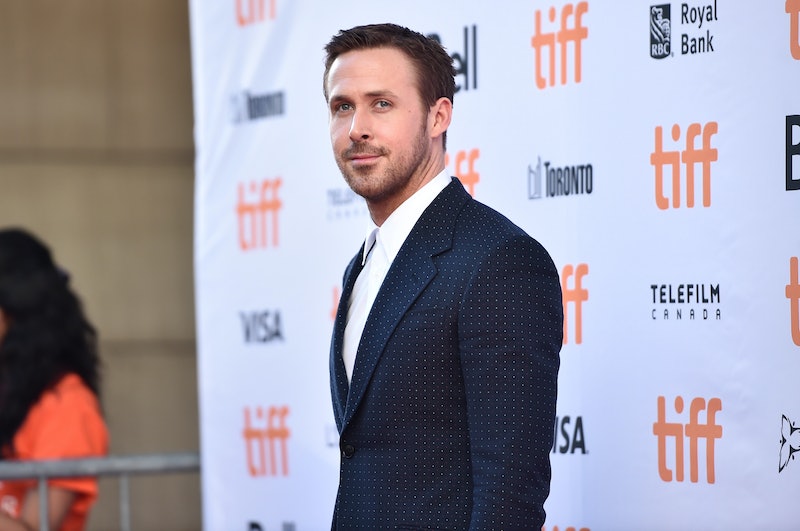 Hey Girl, sad news. It turns out that Ryan Gosling has never said the words "hey girl." Like, ever. It's why Gosling's really confused about how the meme, which first hit the internet in 2009, even got started. In an interview with Variety, the La La Land star shared his bewilderment over the meme with an interesting analogy. “Do you remember when Fabio got hit in the face with a pigeon on the roller coaster and it broke his nose?" he asked. "Sometimes I feel like I’m the pigeon and the internet is Fabio’s face.” He quickly amended that thought, telling Variety, “Actually, I don’t know if I’m the pigeon or I’m Fabio’s face. Depends on the day, I guess.” But this isn't the first time the actor has given his take on the viral phenomenon that made him the internet's boyfriend.

Of course, him literally being filmed while breaking up a fight on a New York City street also helped earn him that title, not to mention becoming a feminist male icon thanks to another meme. But, it's those two words that, whether Gosling said them or not, have endeared him to women and men everywhere. That's why it's worth looking at the many explanations, questions, reactions and Fabio references Gosling has given for the "Hey Girl" meme. Let's take a trip down memory lane, girl.

If You Make A Meme, Make It Good

In 2010, Gosling sat down with MTV to talk about the meme, even chuckling when asked about it. He then read a few of them out loud, joking that he actually writes some of them himself. His real takeaway, though, was "some are funnier than others." This was made clear by Gosling getting a good laugh at one that said, "Hey girl, sorry my shirt fell off." This was before he ragged on himself for wearing a "Star Trek jacket" while feeding some ducks. In the end, he admitted, "That's it, they've nailed it." A ringing endorsement.

In a March 2013 interview with The Hollywood Reporter, Gosling once again explained that he never said those words, which is why he wondered if they had the right guy. "I don't think it's really about me," he said, before offering up that Fabio analogy once again — this time, just a little more concisely. "I think it really is sort of like, I'm a pigeon and the internet is Fabio and it just happened."

While promoting his movie A Place Beyond The Pines in 2013, Gosling once again enlisted the Fabio excuse, telling journalists, "You know when Fabio was on that roller coaster and he got hit in the face? I've been feeling a lot like that pigeon. Like a wrong place, wrong time."

He Still Gets A Good Laugh Out Of It

Gosling once again stopped by MTV in 2014 to do a "Hey Girl" part two. This time he could barely contain himself. "This is so stupid," he said laughing. His laughter, like tear-inducing laughter, speaks volumes, as does him making up his own "hey girl" line on the spot. I'd watch him read these memes all day. Seriously, I'll make time.

He's Not Ready To Own It

During a panel at the South By Southwest festival in 2015, Gosling once again denied he's ever said those two words, according to Reuters. "I understand if you're in a movie and you say something like 'I'll be back,' you own that. But I never said it," Gosling reportedly said laughing. But it seems the audience got the last laugh when the panel's moderator, director Guillermo Del Toro, pointed out that Gosling did in fact say those words while re-telling a story about someone yelling "Hey girl!" at him on the street. Got him.

It Took Him Some Time To Figure It Out

In March 2016, Gosling stopped by Ellen DeGeneres' show and admitted he was confused about why people kept saying "hey girl" to him before he knew about the meme. "They'd scream it across the street, 'Hey Girl!" he said. "So it took me some time to figure it out."

He's Got Nothing To Do With It

An April 2016 promotional video for his movie The Nice Guys had Gosling and his co-star Russell Crowe seeking couples' therapy. It's there that Crowe goes after the Gos for cashing in on his internet fame, but, as it turns out, Gosling isn't making any money off those "Hey Girl" notebooks, coloring books, pillows, or hats. "I don't get a piece of this," he said. "You think I'm making this? This is a charade." Once again, Gosling goes to his most notable defense:

"I never said it... Now, I understand if you're in a movie and you say 'You complete me' or 'I'm just a girl standing in front of a guy.' That follows you around and you got to own that. But I never said it."

Hey boy, a word of advice: denying your memes will only make the internet want them more.

More like this
Joe Alwyn Reacts To Taylor Swift Earning An NYU Doctorate In A Rare Interview
By Jake Viswanath and Nicole Pomarico
You Can Thank 'Spider-Man' For The Meme-ification Of Movies
By Dana Schwartz
Shocked Fans & Former Co-Stars React To Ray Liotta’s Death At 67
By Grace Wehniainen
'Stranger Things' Star Joe Keery Is Dating An "Indie Scream Queen"
By S. Atkinson and Grace Wehniainen
Get Even More From Bustle — Sign Up For The Newsletter