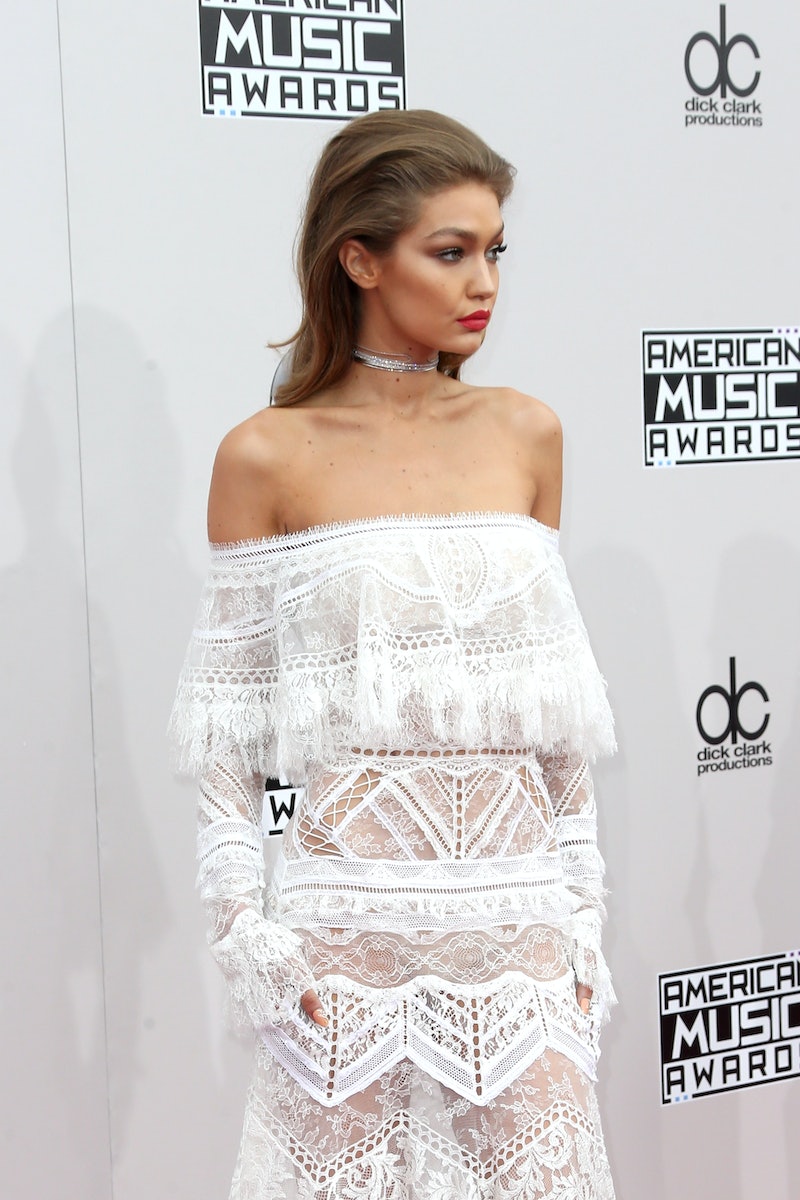 It was "Short hair, don't care" at the 2015 AMAs for Gigi Hadid. Remember, the supermodel wore a floor-sweeping and clingy white dress with a criss-crossed bodice last year. But Hadid's pushed back, head-hugging blonde bob was way more memorable than her frock. Thus, Gigi Hadid's 2016 AMAs red carpet outfit, which was a white, lacy, nearly see-through, and off-the-shoulder dress, needed to be on point for two reasons. First, she would be following up a look that had everyone talking a year ago. Second, she is serving as the co-host of the event, alongside comedian Jay Pharoah. The pressure was on, but Hadid rose to the occasion because of course she did. She wore a stunning Cavalli frock and she slayed, as always.

Hadid actually revisited two elements of her 2015 look — a white dress and a pushed back 'do. She added a choker, which is one of the quintessential accessories of 2016, and she wore her hair long, wavy, voluminous, and darker. But it was pushed off her face, making it similar to the 2015 bob. There was some major height at the crown, as well. The model added a slick of hot pink lipstick. Her shoulders were totally bare and exposed, while her sleeves were extra long.

Observe Gigi in white lace at the 2016 AMAs.

The 2016 AMAs truly offers Hadid the chance to have some additional fashion fun outside of her day job, since her role as co-host affords her the opportunity to change her outfit multiple times throughout the show; she even admitted during her red carpet interview that she will do half the amount of changes as last year's host Jennifer Lopez.

As a model, she is used to swapping outfits in nanoseconds and she should be able to do the same as the co-host of a major music awards show.

But her red carpet ensemble was mega glam, feminine, and sexy. Just like Hadid herself. Check out that top!

While Hadid did not reprise her head-turning, much-discussed bob for this year's AMAs, she wore her big, blonde locks long, loose, and lush.

She rocked a nude, off-the-shoulder pantsuit to the rehearsal and it was also bomb AF.