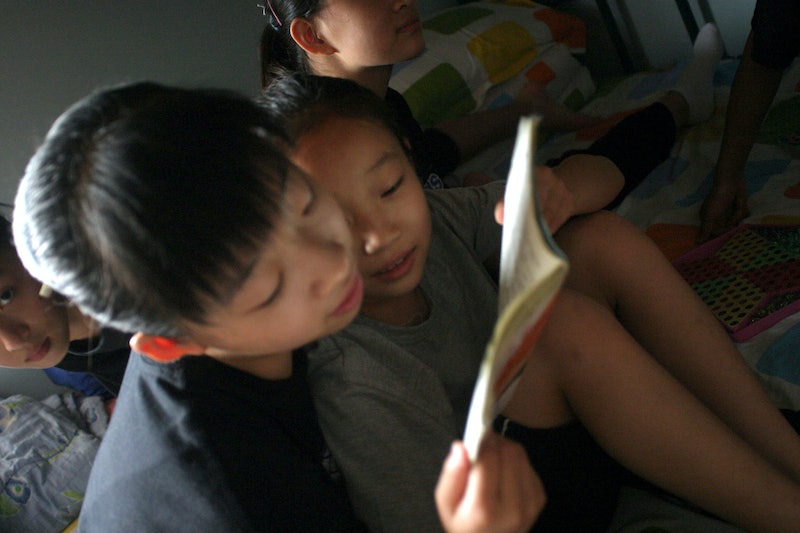 There has been a lot of hubbub in the children's publishing industry lately about the proliferation of gender-specific books. The Let Books Be Books campaign is working to spread the word about labeling of books marketed toward children. The main examples have been companion titles, The Beautiful Girls' Coloring Book and The Brilliant Boys Coloring Book. (Just... wow.) Their mission statement is looking toward publishers:

Children’s publishing should always aim to open up new worlds for children. But telling children which stories and activities are "for them" based on their gender closes down whole worlds of interest.

It's been argued on both sides that a more effective target should be book buyers, directing consumers not to be tricked into this easy marketing, thus forcing the publishers' hands. Michael O'Mara of children's publisher Buster Books said much the same to in a frustrating conversation with The Independent (which recently announced that it would no longer review gender-specific titles itself).

It’s a fact of life how a very large percentage of people shop when buying for kids, do it by sex. We know for a fact that when they are shopping on Amazon, they quite often type in "books for boys" and "books for girls.”

Publishers are going to go with sales and money. So don't give them any. When buying books for little girls, don't be lazy. Remember what inspired you when you were young. Most women I know were more influenced in their childhood by compelling stories with great female characters. Looking back I can think of several children's books that had heroines that were empowering to little girls — and even to women now.

Madeline is curious and adventurous, but what always struck me was how she didn't care about things that may have made her "different." Young girls are so often told how they should look and how to deal with physical "imperfections," but when she had her appendix surgery, Madeline hikes up her nightgown and shows off her scar proudly to her group of peers.

As a little girl who had a scar down her chest, I was immensely empowered by Madeline for being proud of things that make you different instead of having them force you to hide. But even if a scar isn't your "thing," all women deal with the something that makes them stand out, and everyone has to cope with physical issues.

Pippi Longstocking may not be the most responsible girl in literature, but her spirit is irrepressible and infectious. She manges to get everyone involved in her crazy hijinks and reminds kids that living isn't just school lessons and homework; sometimes a little micheviousness is key to health and happiness. And as an adult, whenever I try to wash my floors, I always think of Pippi and tying sponges to my feet and dancing around to clean.

I'll try to get this blurb out without crying. Whew, okay. Leslie from Bridge to Terabithia is adventurous, brave, and kind. She's the type of girl (literally) next door we all wanted to be when we were kids. She has an unparalleled imagination, and isn't afraid to pull other kids down her rabbit hole. I still can't even deal with how it all works out for Leslie, so I'm just going to move on.

Miyax / Julie, Julie of the Wolves

Jean Craighead George's Julie of the Wolves isn't your standard middle school teen novel. Thirteen-year-old Eskimo Miyax — or Julie her "gussak" or white name — is orphaned and runs away from her husband only to be forced to survive in the Alaskan tundra. Before long, a pack of wolves take in Miyax as one of them, and she looks inward to what her true identity is. Julie of the Wolves taught me to be tough and to trust and rely on myself for answers, and she's still a literary inspiration decades later.

OK, so yes, Laura Ingalls in her semi-autobiographical series took on some traditional gender roles — like doing the cleaning and the cooking — but when you think about it, these are pre-teen girls who are actively and efficiently contributing to their family and its survival in the ways they can. That's a pretty tough lesson to deny when you're mother asks you do clean up the dishes.

Judy Blume's Shelia taught all young girls that you don't have to be fearless to be strong and brave. Shelia is afraid of so much, including the water and swimming, but she sucks it up and gives it a try. She spends the summer facing her fears, standing up for herself, and showing a facade of confidence that it becomes real. And guess what? She ends up having the best summer of her life. Shelia is an inspiration for all us regular-Jane girls her age.

Ramona was first introduced to us as the pesky little sister of Beezus. And look, she was a pest. (Even Beverly Cleary admits that.) But that's because Ramona was inquisitive and didn't settle for the easy answers or solutions. When her teacher read Mike Mulligan and His Steam Shovel aloud to their class, she wanted to know how he went to the bathroom when he was so busy digging. She may be frustrating, but it's because she thinks broader than most people her age, and that's something we should all look to be doing.

Annemarie was faced with some heavy situations when she was still young. Her best friend was Jewish and hiding from the Nazis in her house, pretending to be a sister. But while this scares Annemarie, she proves to be incredibly poised, brave, and compassionate, thinking quickly in tough situations and saving her friend's life.

Strong-willed Charlotte Doyle gives a first-person account of a fateful sea voyage that did not go as planned. Instead of returning home to her parents from England to Rhode Island, she is the lone passenger on a ship with a crew set on mutiny and accused of murder. But prim and proper Charlotte doesn't cave under this pressure, she asserts herself and ends up following her passion and heart, no matter the consequences.

Karana, Island of the Blue Dolphins

Karana is based on Juana Maria, a Nicoleño Indian who really was stranded alone on San Nicolas Island for 18 years. Juana Maria, and Karana, relied on their culture of self-reliance as well as a deep, quiet courage to survive and protect herself. As a result, instead of a sad story, Island of the Blue Dolphins is uplifting as Karana is able to find peace in her environment.

Harriet is not always the most likable character, but that's okay; 11-year-olds are allowed to be a little ego-centric. She hopes to be a spy-turned-novelist and takes this ambition seriously, always walking around taking notes. And look, if this is going to be your profession, in the name of truth, you're going to have to hurt some feelings. Harriet doesn't let that stop her, and most adults don't either. In that vein, I think Harriet is actually just misunderstood.

No matter how hard I cheered for Jo to end up with Laurie at the end (boo Amy!), it was an inspiration for her to instead choose a new life for herself, where she chased her ambitions and ended up happier than she would have been stuck back at home with the neighbor boy.