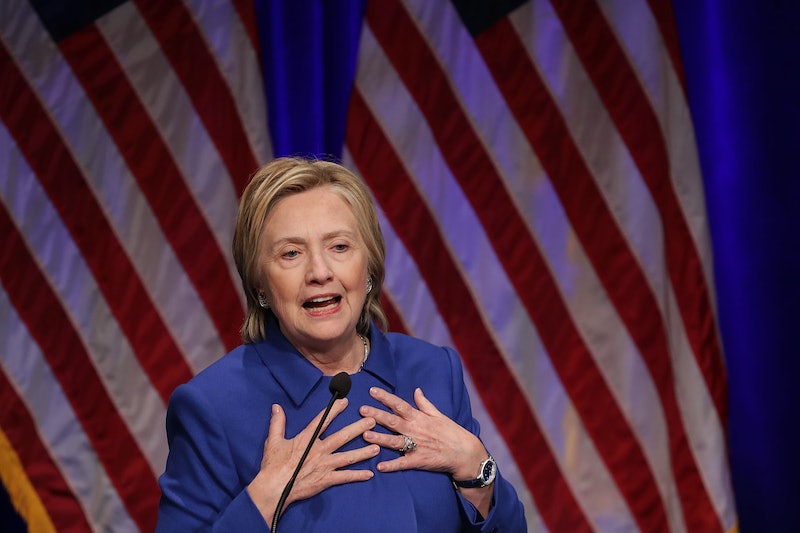 After a long week of election fallout and the official announcement of Donald Trump as our new president-elect, Hillary Clinton made her first public appearance since her concession speech Wednesday night at a charity gala for the Children's Defense Fund in Washington, D.C. While admitting how discouraging and emotionally draining the past week has been, Clinton's first post-election speech placed a strong emphasis on our need to get involved in local politics and stay involved.

At one point in her speech, Clinton admitted the difficulty of coming out to speak at all, saying, "There have been a few times this past week where all I wanted to do was curl up with a good book and our dogs and never leave the house again." And yet, by leading by example, Clinton made it clear that no matter how beaten down we're feeling, giving up is not an option in Trump's world.

While emphasis on volunteerism and advocacy of all kinds was stressed during Clinton's post-election address, she made sure to specifically urge us to invest our time and energy into protecting, educating, and supporting the next generation of children. Her emphasis on supporting and uplifting children through service and activism makes sense, considering the event itself was honoring Clinton's decades of commitment to the Children's Defense Fund. So how and where exactly can we get involved to ensure equal amounts of safety and education for children? To start with, I've compiled a handful of organizations that can always use our donations of time or money.

The Children's Rights organization was originally founded as an offshoot of the New York Civil Liberties Union, and is dedicated to advocating for children in the foster care system who have suffered neglect or abuse at the hands of their families or institutions. Workers from Children's Rights are working to implement top-to-bottom welfare reform in over a dozen states, demanding access to better schools, healthcare, and homes for children in the system. You can donate money, and also check out current foster care reform campaigns to get involved.

For those unaware of the specific functions of the organization Clinton's supported for decades, the Children's Defense Fund is a nonprofit advocacy group that focuses on defending children's rights to healthcare, food, protection from abuse through lobbying and working with individual communities. You can donate here and also become a child advocate by getting involved in a local campaign.

The Trans Student Educational Resources is a youth-led collective that is dedicated to advocating for a safer school environment for gender-nonconforming and trans students across the country. The mission is to both educate the public about trans rights issues, mobilize trans activists and push for trans-friendly education. You can donate here or if you're under 28-years-old you can volunteer and get involved with local initiatives.

The Native Children's Survival project is a nonprofit originally started by Native musician Robby Romero in 1989, and is dedicated to providing financial resources, mental health support, and artistic outlets for Indigenous children. You can donate to the Indigenous Children's Fund and the Project Protect Awareness Campaign through the website, or get involved with with the campaign itself.

With a Trump presidency threatening to dramatically change our healthcare system with his campaign promise to repeal and replace Obamacare, it's more important now than ever to lend financial, physical, and emotional support towards families coping with seriously ill or terminally ill children. You can donate to Make-A-Wish America or get involved in your local chapter in order to spread a little warmth towards a child or family dealing with the devastation of cancer.

Right now, it is more important now than ever that we invest in and nurture our children.