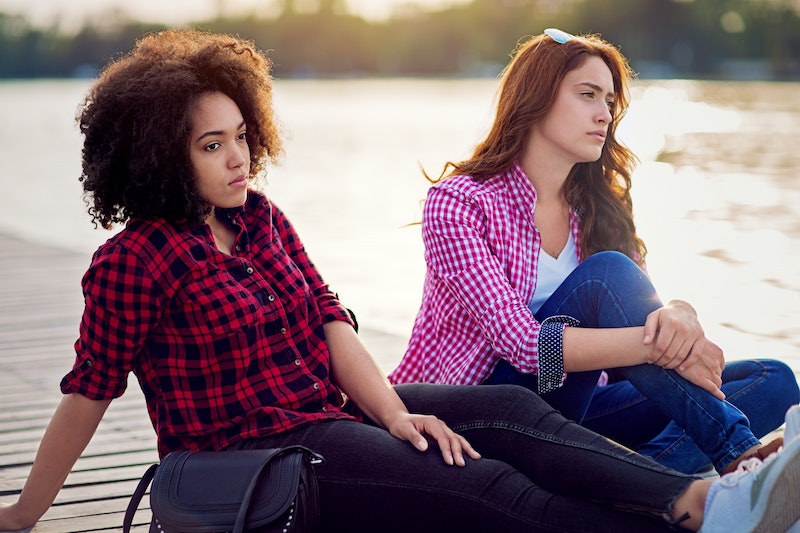 Even the most cynical of people can't deny that the best part of being in a relationship is the love you get from your partner on a daily basis. It's not that you need the affection to feel good about yourself, but it is nice to receive it unconditionally, which is why you put up with all the other crap that comes with a romantic relationship. But when things aren't going so well in the partnership, the warmth that's generally exchanged between you and your SO starts to decline, and one — or both of you — might not feel loved enough as a partner.

Every relationship is going to look different, but there are a few key pillars that make a healthy, happy couple. There has to be a lot of trust between the two people, they've got to see the world in compatible ways, and there has to be regular communication. Additionally, both parties have to show each other a solid amount of love and positive affirmation. While we're all responsible for our own inner happiness at the end of the day, we still crave — and deserve — that tenderness from our partner.

When things in our lives get particularly busy, though, we may not nurture our SO as much as we used to. Next thing you know, they're unhappy in the relationship — and you're too preoccupied to notice the changes in their mood and behavior. Before things get too far, here are eight signs your partner isn't feeling loved enough.

When you're at your very best, you and your partner enjoy spending quality time together. You live out your mutual interests and find the fun in even the most boring things, like grocery shopping or picking out which movie to watch. Nikki Martinez, counselor and licensed psychologist, tells Bustle it's a warning sign when your SO becomes less and less interested in hanging out with you. "This may be a hint they are unhappy, and not dying to spend quality time with you," she says. Why would they want to be around you if they're not feeling loved?

The journal Psychology of Popular Media Culture published a study showing that individuals with partners who were dependent on their smartphones were less satisfied in their relationships than those who had partners that used their phones in a healthier way. "I’m more likely to think my relationship is doomed the more I believe my partner needs that thing," Matthew Lapierre, assistant professor at the University of Arizona and author of the study, told TIME. The more time you spend with your nose buried in Twitter, the less your partner will feel like they're an important part of your life.

Their Self-Esteem Has Visibly Plummeted

It's a terrible feeling when someone you love doesn't give you the time of day like they used to, whether it's your best friend or a parent. It's especially painful when your SO is brushing you off for bigger and better things, and it can cause a decline in your self-esteem. So if you notice that your partner has been more self-deprecating than usual, you may want to ask yourself if you've been ignoring them lately. Their degree of self-confidence could be reflective of what's really going on in your relationship.

They Aren't Being As Talkative

Poor communication is one of the first signs that one or both people in a relationship aren't happy. It's difficult for someone to speak honestly about what they're feeling to a person that doesn't consistently act like they love and support them, so all those awkward conversations you've been having over dinner aren't happening simply because your SO had a boring day. They might not be talking to you about important things because they don't feel like you really care all that much.

Their Friends Have Commented On Their Shifts In Behavior

A lot of times, we don't notice significant changes in our partner because we're with them so often. Our friends, on the other hand, can see a lot from the outside looking in. As soon as they start mentioning that your SO's behavior has been a little bit weird lately — they've become a recluse, they're getting angry easily, etc. — take a close look and see if you can witness these shifts yourself. These are all potential indications of how fulfilled they're feeling in your relationship.

They Keep Asking You A Lot Of Seemingly Meaningless Questions

It sounds insensitive, but if it feels like your partner is pestering you all the time with silly questions and remarks, they're probably just searching for the attention you're not giving them on a regular enough basis. It's the oldest trick in the book, one that we used to play when we were little kids and wanted something from our parents. We revert back to that as adults because we know it can be very effective. As annoying as it may be in the moment, step away and try to figure out what it is they're actually trying to gain from these interactions. Are you spending enough time together? Are you showing them how much you love them?

They're Flirting More With Other People

At McGill University, a study found that individuals who were in committed, loving relationships found other potential suitors less attractive when they found out that the person was romantically interested in them. It's a protective mechanism used to ensure nothing damages the relationship they already cherish so much. If your SO isn't getting the affection they need from you, this protective mechanism probably won't kick in at all, so you may find that they're responding to the flirtation of people around them in ways that threaten the relationship.

They Keep Picking Fights About The Silliest Things

Fighting about who misplaced the remote control sounds so silly after the dust has settled, but it's exactly the kind of thing that can trigger a neglected partner. They don't feel comfortable calling you out on how much time you spend at the office, so they channel their frustration into mundane things around the house. Instead of yelling at each other about these details, set aside some time to really, truly talk to one another. Having a mature conversation will give you both the chance to hash out all the ways you could improve on showing your love to one another.