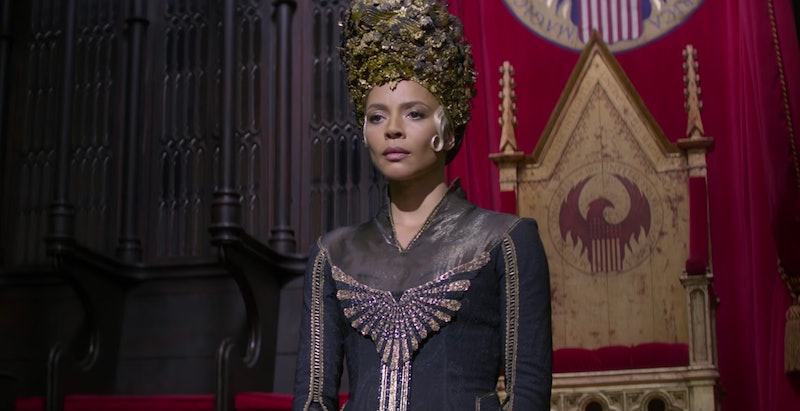 Fantastic Beasts and Where to Find Them takes place a little over 60 years before the Harry Potter saga begins, and 54 years before Harry is even born. When the film begins in 1926, Harry, Ron, and Hermione aren't even ideas, and even Professor McGonagall hasn't yet been born. And the fact that the film is so far removed chronologically from the Harry Potter series means a lot. At the core of the Harry Potter story, there is one question that has never been answered: what sets the stage for someone like Voldemort to take power? Magical prowess alone is not enough for an evil wizard to reign terror on an entire country. What came before, then, must have paved the way for him. And that is what we're finally learning with Fantastic Beasts. Here are just a few ways in which the Fantastic Beasts and Where to Find them timeline could interact with the Harry Potter timeline, and what that means for the Wizarding World.

Dumbledore and Grindelwald were both born in the early 1880s, making them around 45 during the events of Fantastic Beasts. This is years after their falling out after Ariana's death (as described in Harry Potter and the Deathly Hallows) in the summer of 1899, meaning that the two are already on very opposite sides. As pointed out in the film, in 1926, Grindelwald is increasing his attacks in Europe and growing his army while Dumbledore is teaching Transfiguration at Hogwarts.

J.K. Rowling has revealed that the five Fantstic Beasts films will cover 19 years, ending in 1945 with Grindelwald and Dumbledore's final duel. So, with 20 more years left to go before Grindelwald is defeated, it seems fair to assume that the threat of Grindelwald will only grow in the next few films, and that we will, indeed, see a younger Dumbledore on the big screen.

Fantastic Beasts And Where to Find Them Book

Newt Scamander's book Fantstic Beasts and Where to Find Them is published in 1927, the year following his trip to New York City seen in the film. This quick turnaround suggests that future Fantastic Beasts films won't be totally focused on Scamander's magical creatures. With his book already published, Newt will be a more established wizard in the sequel, which means he could play a huge role in the fight against Grindelwald.

Fantastic Beasts and Where to Find Them takes place in November of 1926, just one month before Tom Riddle, aka Voldemort, is born. Coincidence? I think not. Tom is raised in a Muggle orphanage from 1927-1938, when he leaves to go to Hogwarts. As previously stated, the Fantastic Beasts series is said to cover 19 years, meaning it will cover Tom Riddle's childhood and his time at Hogwarts.

Furthermore, the Fantastic Beasts series will culminate with the 1945 duel between Dumbledore and Grindelwald. By 1945, Tom will have already gotten revenge on his father's family — he kills Tom Riddle Sr. and his family in 1943 — which means that Voldemort will already be a simmering threat to the Wizarding World. It's possible, then, that future Fantastic Beasts movies could cover Voldemort's origin story.

The Fantastic Beasts series is all set to cover Grindelwald's rise to international power, and the spread of his anti-Muggle ideology. Despite his defeat in 1945, it's obvious that given his overlap with Tom Riddle's childhood and introduction to the Wizarding World, Grindelwald will be somewhat of an inspiration to a young Voldemort. And, given young Tom Riddle's mischievous ways, it wouldn't be far fetched to think that perhaps Voldemort was able to get in contact with Grindelwald as a young man.

Based on the timeline of Fantastic Beasts, the series will set up Harry Potter by laying the international groundwork for Voldemort's rise to power, with his eventual fall taking place after in the Harry Potter series. It's sad to think that one crazy, power-hungry wizard led to another within barely 40 years, but as long as there are wizards like Newt and Harry, at least we get some pretty good stories out of it.